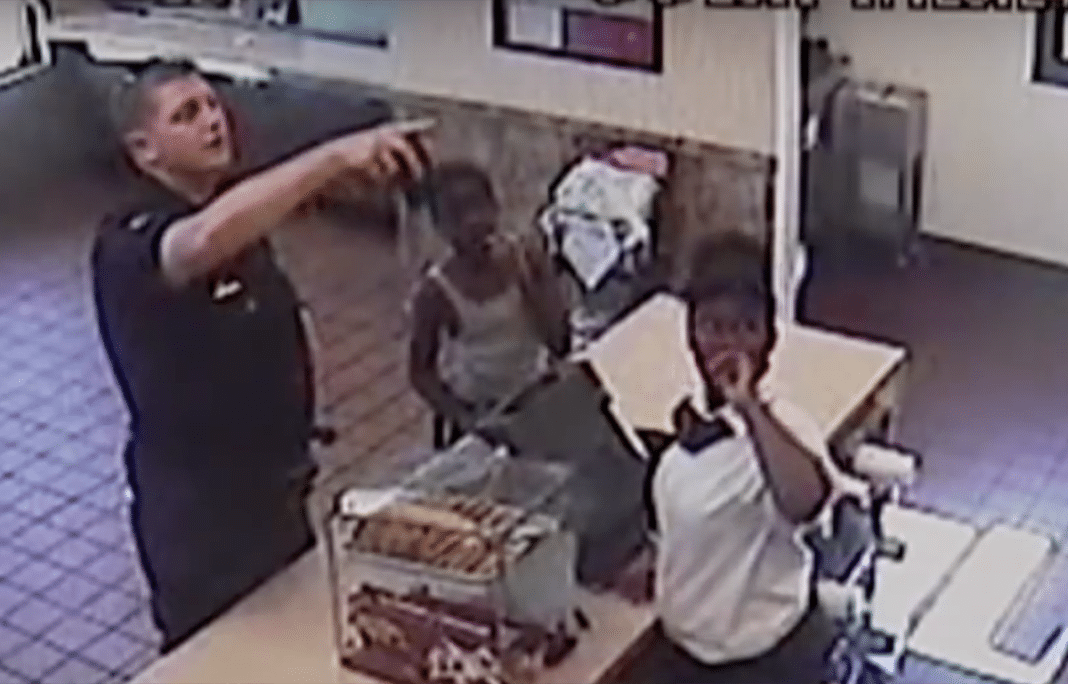 A surveillance video from a McDonald’s restaurant in City Heights, San Diego shed light on the good heart of Officer Jeremy Henwood. He was gunned down by a suicidal man after leaving the restaurant on Aug. 7, 2011. One of the last people to see him alive was Daveon Scott, who was 13-years-old at the time.

Scott was in line to buy cookies at the McDonald’s, but he was short of the amount he needed to pay. He remembered how Officer Henwood reacted years later at annual remembrance ceremonies for the fallen officer at the park dedicated to him: Officer Jeremy Henwood Memorial Park.

“It changed my whole mentality of officers,” said Scott.

OTD 7 years ago, SDPD officer Jeremy Henwood was killed in his cruiser, a bag of food from McDonald's still warm beside him. A year later, I talked to the boy Henwood had helped before being shot. Be kind to someone today in Jeremy's memory. R.I.P.https://t.co/mc4Vjx1z2p pic.twitter.com/DFHRVvBbS2

Officer Henwood, who served two tours in Iraq as a Marine combat veteran, stepped up and paid for the three cookies for the boy. They shared a smile and some small talk. Henwood told Scott to “work hard,” and left the restaurant. Minutes later, he was killed when suspect Dejon Marquee pulled up alongside his patrol car and opened fire in an unprovoked attack. Henwood died a day later, and Marquee died in a shootout outside his City Heights apartment. He had left a suicide note inside his home.

Today, we remember @SanDiegoPD Officer Jeremy Henwood, E.O.W. 8/7/2011. Many may recall minutes before he was murdered, Jeremy was seen on surveillance video buying a cookie for a boy at McDonald's. Never forget his life & sacrifice. pic.twitter.com/9MvRG9sMj2

At the remembrance ceremony, Scott spoke about how the man and the tragic news of his passing still affected him.

“This day is not just another day. It’s a day that your body feels cold. It makes me feel hurt and sad,” the teenager told NBC 7. “I’m happy that I met the guy before it was his time to go because everything happens for a reason,” said Scott.

Up until he met Henwood, he didn’t like the police in general. Afterward, he saw them in a different light.

The simple gesture made a big difference that day, and Scott was shocked and saddened to learn that he was one of the last people to speak to Officer Henwood.

“I know he’s looking down on me right now, shaking his head like, ‘You’re a good kid, man,’” he added.

Officer Henwood’s last minutes on earth showed he had a good heart and that simple acts of kindness are powerful in an often unfair and unjust world. He was a police officer and Marine combat veteran but he was also just like everybody: a human being.