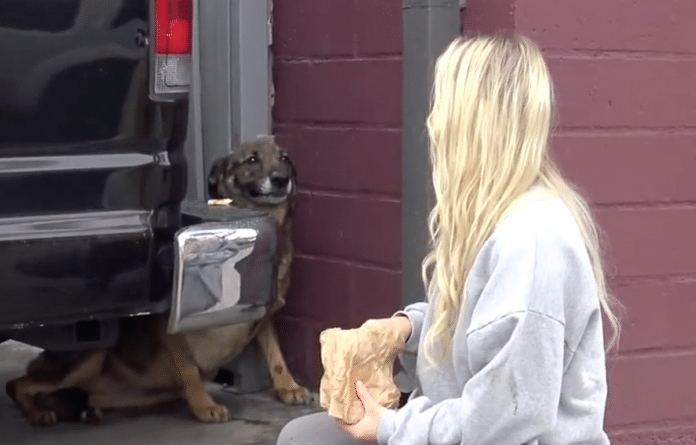 A German Shepherd appropriately named Rain cried like a human when rescuers from Hope For Paws arrived to save her. The rescuers thought they had seen it all, but they had never seen an animal make this kind of noise.

“Rain was crying like a human… she was so scared, but at the same time wanted to be helped.”

Carey Linnell called the rescue group when she came across the homeless animal. Terrified and alone, Rain was trying to survive underneath a van for days. She warily peeked out at the approaching rescuers, who carried nets and snares to catch her.

These rescuers, Loreta Frankonyte and Eldad knew just what to do, enticing Rain with some hamburger meat and talking to her softly to encourage her. They approached the dejected animal patiently and carefully, knowing if she ran away they might lose their chance to save her.

The starving dog was so shy that she was reluctant to take meat. She appeared to be suffering, and they feared she might be in pain from broken bones.

Fortunately, she knew and trusted Carey Linnell, who assisted and gained the frightened dog’s trust as they managed to secure Rain in a kennel after all the crying. She was ok after all and was soon enjoying a spa treatment with a thorough bath.

The before and after photos are amazing!

A German Shepherd, who I named Rain was so afraid of humans that she screamed like a human herself, when Eldad at Hope…

Seeing how sad and afraid Rain was, it becomes even more amazing how she totally transformed after the rescue. She turned into a big love bug, craving affection. She was soon adopted to a forever home, where she would have a new older brother, Ernie.

She would also receive a new name: Sassy Pants. Her days of crying were long gone.

See how completely she transformed from scared and lost to overjoyed and wiggling all over in the video from Hope For Paws below.

Hope For Paws is a non-profit animal rescue organization in Los Angeles that specializes in rescuing animals that elude other rescue groups. They show that stray animals make amazing pets, but have often suffered unimaginable abuse from their cruel owners.

“These animals have eluded other rescuers and their suffering increases daily as they must forage for food, face predators, exposure, being hit by cars, pain from wounds, broken bones from car accidents, infections, parasites, infestations, and sadly unsavory people.”