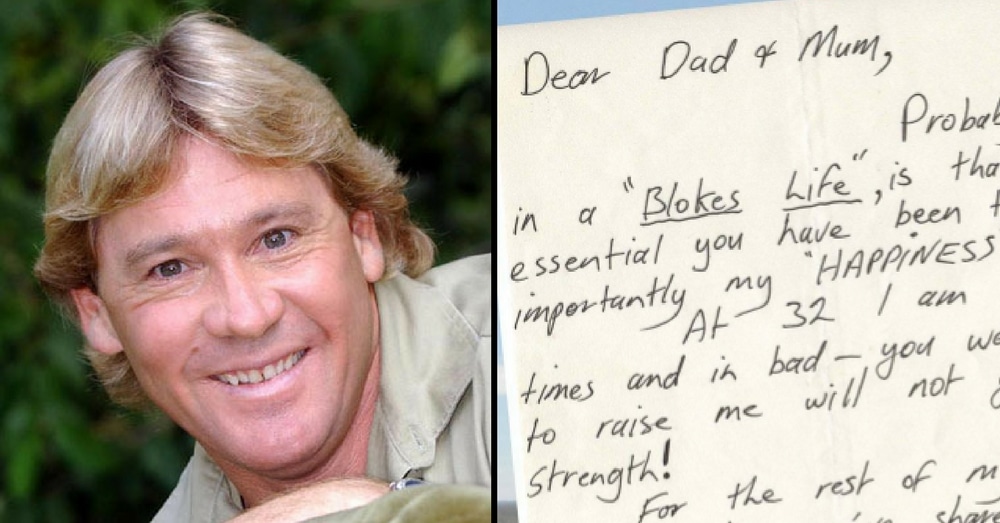 The world mourned in 2006 when famed “Crocodile Hunter” Steve Irwin was killed. The popular environmental conservationist and TV personality had won the hearts of millions with his zeal for life and love for the animals he worked to protect.

Steve wasn’t just an incredible person when the cameras were rolling, though. His love and joy for his life and the people in it were evident to everyone who knew him well.

Recently Steve’s parents, Bob and Lyn, shared a letter that their son wrote to them a little over a decade before he died. In it he thanked them for everything they had done for him and for the values they had instilled in him that made him into the man he was.

“Dear Dad and Mum,” he wrote. “Probably one of the most unfortunate things in a ‘Bloke’s Life’ is that it takes over 30 years to realize how essential you have been to build my character, my ethics and most importantly my HAPPINESS.

“At 32 I am finally starting to figure it out, in good times and in bad – you were there; you’re (sic) strength and endurance to raise me will not go unrewarded. My love for you is my strength!

“For the rest of my life I will reflect on the unbelievably GREAT times we’ve shared and will continue to share. You’re my best friends!”

On the envelope Steve wrote, “Please be happy to know that your strength and wisdom have been passed on.”

Bob himself was a prominent conservationist who passed his legacy on to his son, who in turn passed it on to his children. The letter will be featured in Bob’s memoir, “The Last Crocodile Hunter: A Father and Son Legacy,” which is set to be released in October.

It is clear that Bob and Lyn began a beautiful legacy that will continue on through the years. Steve’s daughter, Bindi, has taken up the mantle of animal conservation and has captured the hearts of millions in much the same way her father did.

“We miss you so much and are extremely proud to be carrying on in your footsteps,” she wrote in an Instagram post honoring her dad.

As much as Steve Irwin is missed, his life, love, and legacy will carry on.

Were you touched by this letter Steve Irwin wrote to his parents? So share this!