Steve Harvey Walks Daughter Down Aisle. What He Does When He Sees Son-In-Law…I Lost It 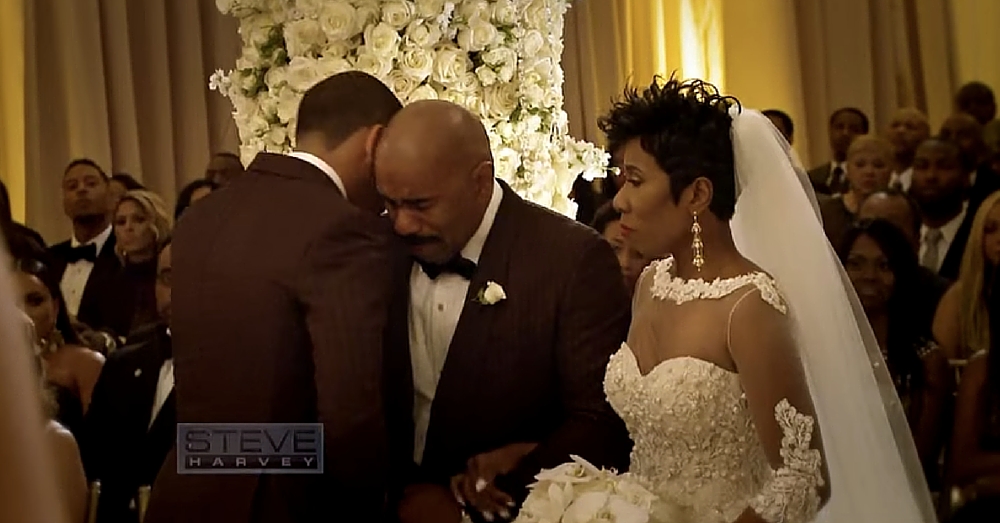 Family means everything to TV host Steve Harvey, and he has always been close to his children, wanting to give them everything he can to make their lives as good as possible.

When his first-born child, Karli, was getting ready to marry her fiancé Ben Raymond, Steve was happy for her, but he also knew it would be very hard to let her go. “I don’t want to let her go,” he said in an interview before the ceremony. “I don’t.”

In the year leading up to the wedding, Steve called on his viewers to help them make some of the important decisions about the big day. A few weeks after the ceremony, Ben and Karli came onto Steve’s show to share some fun details about their special day with the audience.

“I told my daughters I was gonna give this to ‘em, the day of their dreams,” Steve said. “I didn’t know they dreamed of this many flowers.”

The venue was decorated with 120,000 stems that took 60 floral designers 10 days to put together. The result was magical.

But while the decorations were incredible, the most beautiful moment of the ceremony was when Steve walked Karli down the aisle and handed her over to her soon-to-be husband.

It was difficult for Steve to let her go, but he knew that in doing so he was giving her to a wonderful man who would take over his role of protecting and providing for his daughter.

The emotional moment is one many will be able to relate to, and one this father and daughter will remember for the rest of their lives.

Were you touched by this special moment between Steve Harvey and his daughter? So share this!