He Spends Months Making Belle Dress For Girlfriend, But What He Does Next? Amazing 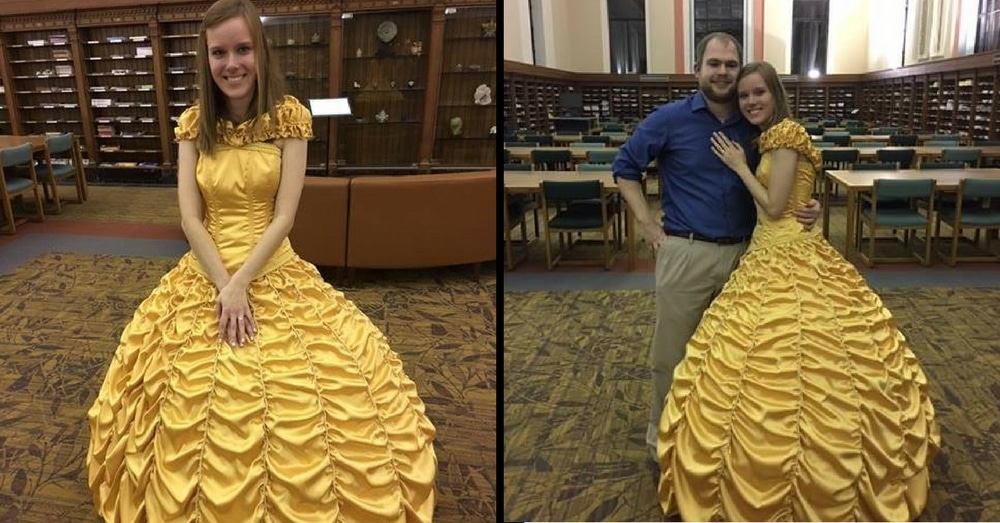 When Joel Lynch first met Cara Szymanski when they were in a wedding together he knew she was something special, but no one could have predicted then that the pair would have a “tale as old as time.”

When Joel began to think about proposing to Cara he knew he wanted to make the moment extra special. Cara has always loved the movie “Beauty and the Beast,” so Joel decided to use that as his inspiration for the perfect proposal.

“[Cara] grew up admiring Belle from ‘Beauty and the Beast,’” he said. “Wanting to recreate the famous scene, I decided to make her the dress to coincide with my proposal.”

Even though he had absolutely zero sewing experience, Joel set out to make Cara a dress like the one Belle wears in the famous dancing scene from the movie.

Using a cheap sewing machine and lots of trial and error Joel began to create the perfect dress. He started the project in October and worked up to 14 hours a day during his winter break to make sure he finished in time.

Joel finally completed the dress in January, just one hour before Cara arrived for a weekend visit.

Joel took Cara for a walk through the Iowa State University library where he is a grad student. As he opened the door to an adjacent room Cara couldn’t believe her eyes – there was the dress in all its glory!

“When I opened the door to the side room, she saw the dress and, as you might expect, burst into tears,” Joel said. “After I helped her get it on, I told her to wait for the music to start.”

As they stood together, “Tale As Old As Time” began to play and Joel took Cara in his arms and waltzed her around the room.

After that it was time for Joel to pop the big question.

Were you impressed by what Joel did for Cara? So share this!