She Spends Hours Setting Up Elaborate Proposal, But She Wasn’t Prepared For His Response 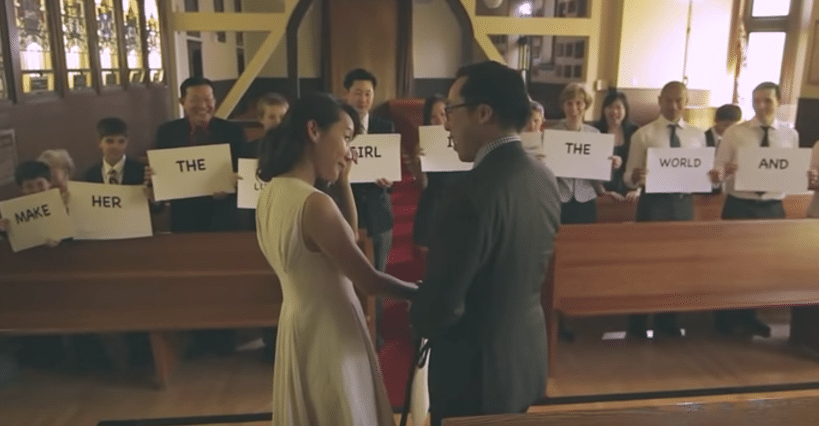 Traditionally it’s the man who proposes to the woman. For centuries that’s usually been the way it goes. Sometimes, though, the woman decides that she wants to be the one to propose.

People have lots of different opinions on this. Some see nothing wrong with a woman proposing, while others think that it’s the man’s place and the woman shouldn’t take that away from him.

Whichever way you lean, though, we think you’ll love this sweet proposal!

John and Vicky had been dating for eight years and were very much in love.

Several years into their relationship John had proposed to Vicky, but she told him she wasn’t quite ready for marriage.

John knew Vicky was the woman for him, so he agreed to keep dating her until she was ready.

When Vicky finally felt ready to say “I do,” she thought it was only fair that she propose since John had already done it.

She gathered all of their loved ones together at John’s old school in Vancouver and then blindfolded John and led him into the school’s chapel.

When he took the blindfold off he was met with friends and family holding up signs that marked all of the big milestones in the couple’s life. Their dog even got in on the action!

Vicky was waiting for John at the end to tell him how much she loved and appreciated him. Then she popped the big question.

John’s response, though, left Vicky stunned. It definitely wasn’t the answer she was expecting! But what he did next left her – and everyone else in the room – in tears of joy!

Did you love John’s response to Vicky’s proposal as much as we did? So share this!