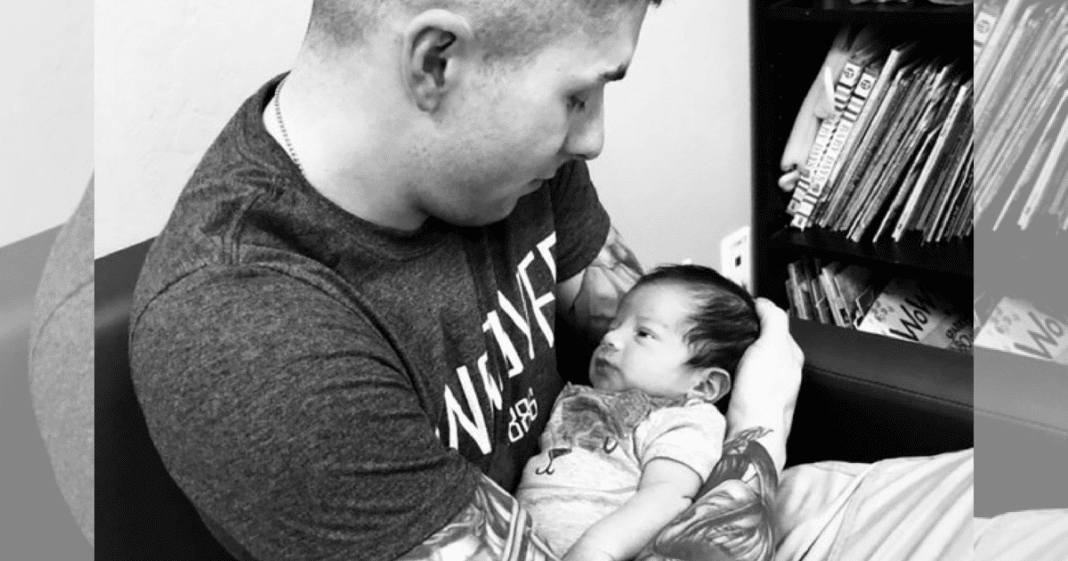 Sgt. Steven Garcia is an American soldier from Arizona who found himself in the middle of an unlikely battle. His incredible story will show just how far a father is willing to go when fighting to protect his children.

It all began last May, when Garcia, 24, was leaving for duty in Seoul, South Korea as a patrol supervisor. At the time, his wife had informed him that she was expecting his child.

By January, the young father-to-be received devastating news when his sister told him that his wife, Marina Garcia, had lost the baby during childbirth.

Then things took an even stranger turn one month later when Garcia discovered it had all been a lie. The baby boy was alive.

But that’s just the beginning of Garcia’s unimaginable ordeal. On February 5th, a couple in a car with out-of-state plates was pulled over for speeding by Arizona highway patrol. Also in the vehicle was a 3-day-old newborn baby.

It turns out that the newborn just so happened to be the same child that Marina had declared dead. In an effort to get rid of the child, she sold him to the couple, Alex Hernandez, 33, and his wife, Leslie Morin Hernandez, 41.

The police took them in for questioning when they were unable to provide documentation proving they were the child’s biological parents. After taking the couple into custody, the baby who had been named Leo, was placed under the care of Arizona’s Department of Child Safety.

Once they figured out who Leo’s biological mother was, they went and met with Marina who quickly confessed that she had in fact made the deal. “The only thing on her mind was getting rid of this child, this problem in her life,” Cochise County Attorney Brian McIntyre told KVOA.

After questioning by police, Marina also admitted that she didn’t know if Garcia was even the father since he had been stationed abroad when she conceived.

Detectives immediately contacted Garcia who was clearly stunned. “I was under the assumption the entire time that she was pregnant that I was the father,” Steven said.

A DNA test confirmed his worst suspicions. “When I found out I wasn’t, I was pretty upset. I was kind of in denial. I couldn’t believe what was going on.”

It took some time for Garcia to accept his circumstances but he wasn’t going to let go of Leo that easily. Even though he is not the infant’s biological dad, the soldier decided to fight for custody.

He plans to divorce Marina and has started a GoFundMe to help him cover the costs of legal fees and travel expenses. You may ask yourself why is this soldier fighting so hard for a child that isn’t even his?

Garcia himself is adopted and his adoptive father is his source of inspiration.

Marina and the Hernandez couple were charged with kidnapping, fraudulent schemes, and conspiracy and fraud by concealment.

As of now, the case is still in limbo and little Leo remains in foster care. But Garcia remains hopeful that he will come home soon.

“Without him, I would not be where I am today, and for the opportunity to do that for someone else, I believe it’s important. It could change the child’s life and give him a better future, and I believe that’s the right thing to do,” he said.