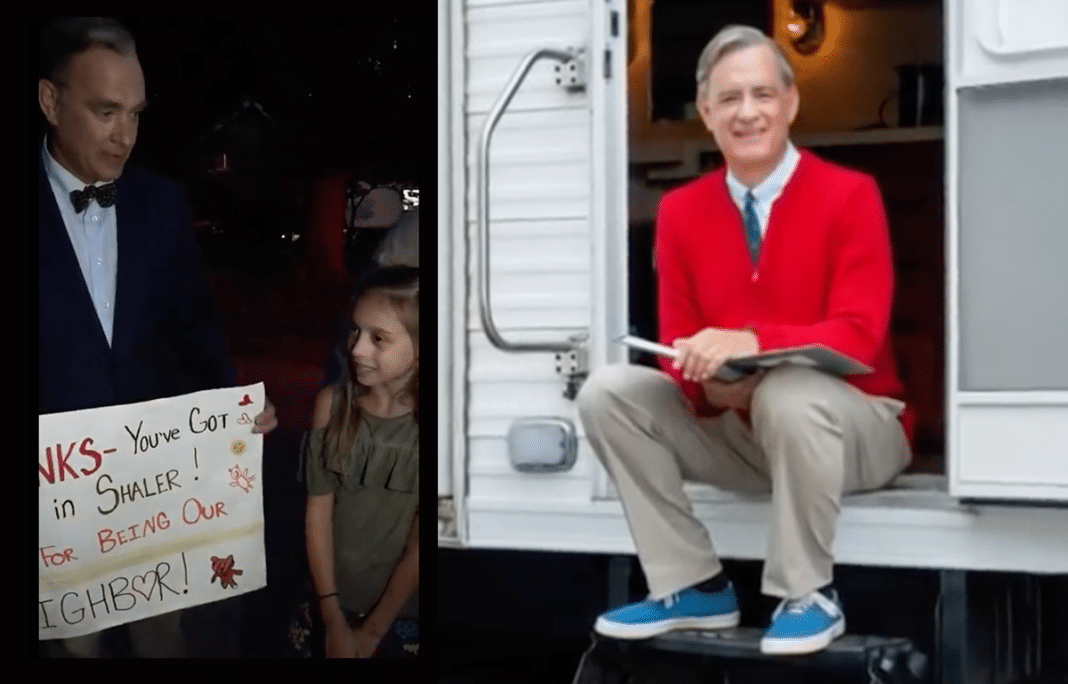 Mr. Rogers’ Neighborhood, the classic beloved kid’s show, ran for an astounding 31 seasons starting in the 1960s before going off the air in 2001. Rogers died not long after that in 2003 due to stomach cancer. He was 74-years-old and passed away with Joanne, his wife of 50 years by his side. A documentary about his life called Won’t You Be My Neighbor was an unexpected box office hit this summer.

Mr. Rogers’ warmth, compassion, and empathy are exactly what we need much more of today. Fortunately, we’ll be seeing a lot more of him, or least his lookalike, actor Tom Hanks, who is starring in a new film about Rogers and his “unlikely friendship” with journalist Tom Junod.

Award-winning journalist Tom Junod’s life was changed after writing a profile of the multi-award-winning television personality for Esquire magazine in 1998. TriStar Pictures acquired the rights to the film, which has a working title of You Are My Friend and described the plot as:

“A cynical journalist begrudgingly accepts an assignment to write a profile piece on the beloved icon and finds his perspective on life transformed.”

A preview of Tom Hanks in the role of Mr. Rogers created much excitement in late September when Sony pictures released a shot of Hanks wearing Fred Roger’s signature red sweater and sneakers.

Welcome to the neighborhood, Tom Hanks. Get your first look at Hanks as the iconic tv personality Mr. Rogers in Sony’s upcoming film: pic.twitter.com/nTllyqoTEh

Now we’re getting a new sneak peek after Hanks was seen singing the classic Mr. Rogers “It’s Such A Good Feeling” song with children in the Pittsburgh area, where the film is being shot. A child named Evie made a special sign for Hanks, telling him “You’ve Got A Friend in Shaler!” and Hanks responded by leading the kids in the iconic closing song for the Mr. Rogers’ Neighborhood show. He followed it up with warm and familiar message and some fist-bumps with the kids.

“Now kids, you’re all very special you know that? All you have to do is be yourself,” said Hanks.

The film is set to be released by next October 2019.

Tom Hanks is Mister Rogers, coming to a neighborhood near you October 2019. pic.twitter.com/2TP3eiPUCx