Sleeping Mom Annoyed When Cat Scratches Her, Then Realizes She Just Saved Their Lives 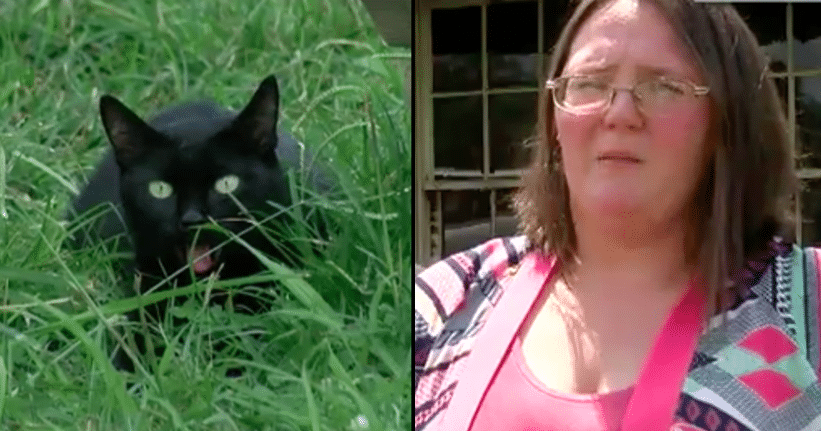 We often hear stories of dogs who go to great lengths to save humans from disaster, but they’re not the only heroic animals out there. As much as we often think of cats as being more aloof and uncaring, they can be great heroes too!

Emily Chappell-Root admits she never actually wanted a cat, but finally giving in to her children’s wishes, they adopted Luna. Since then, Emily has not only grown fond of Luna – she owes the cat her life.

On that fateful night, Emily was asleep at home with her six children, ranging in age from 7 months to 10 years old. Her husband was at his third shift job.

Luna had been outside, but around 4:30 a.m. she slipped into the house, jumped on the bed where Emily slept, and began pawing at her feet.

Emily tried to ignore her and go back to sleep, but recalls that Luna “was insistent, [as if to say], ‘You’re getting up.'”

Emily finally gave in to the cat’s pleading for her to get up. As she walked out of the bedroom, she realized why Luna had been so insistent – flames were coming from the kitchen area and into the hall. Emily quickly woke up her kids and got them outside.

“If she hadn’t woke me, we might not have all made it out,” Emily said through tears. “We’re really, really blessed to have her and that everybody got out.”

Thankfully, family hero Luna also escaped the flames. Her family plans to spoil her for the rest of her life.

“She’s on wet food for life,” Emily said. “Wherever we go will have to be a home that will let her go with us.”

The family lost nearly everything in the fire. If you’d like to help, you can visit a GoFundMe page that has been set up for the family.

Were you amazed by this cat’s heroic actions? So share this!