Skier Looks Up, Sees Man Dangling From Chairlift. What He Does Next? Holy Moly! 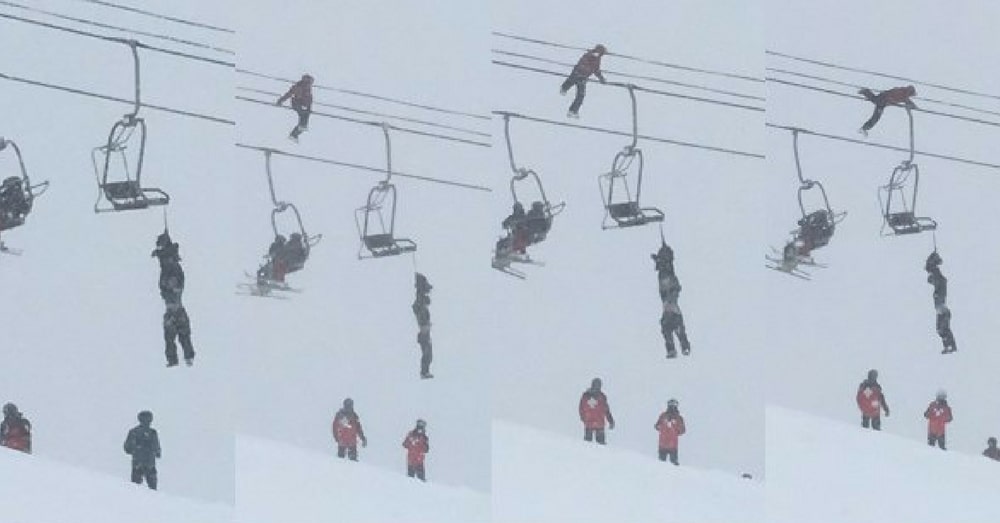 A man who got tangled in an Arapahoe Basin chairlift Wednesday morning and was hanging unconscious from his neck was cut down by a professional slackliner who climbed up a lift tower, slid approximately 30 feet across the lift’s cable and cut him free with a knife tossed from ski patrollers.

The harrowing rescue was recounted to The Denver Post on Thursday by the rescuer and confirmed by the resort, which says it is reviewing the incident that occurred around 11 a.m. on the Lenawee Mountain Lift. Parts of the rescue were also captured on video and in still photos. 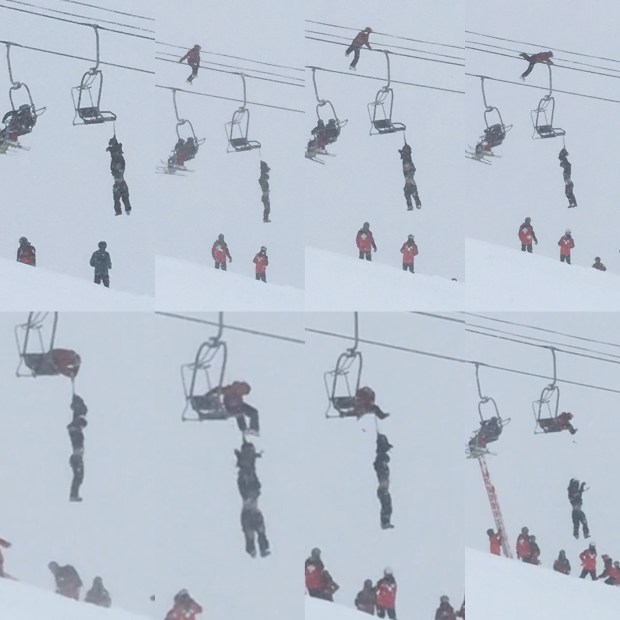 “It was one of the most scary things I’ve ever seen, honestly,” said Mickey Wilson, as he recounted the rescue of the dangling man. “Just seeing a person get the life sucked out of them. I kind of stopped thinking and just started acting.”

Arapahoe Basin says the man who was caught in the chair was taken by ambulance to St. Anthony Summit Medical Center and was then transferred to St. Anthony Hospital in Lakewood. The ski area declined to provide information on the man’s condition.

However, Wilson said he spoke to the man through FaceTime on Wednesday night and said that despite a neck brace he appeared to be OK.

The resort says the man was trying to unload from the three-person lift when his backpack became entangled in the chair. The man, still dangling from the chair, was swept around the bullwheel at the top of the lift and back down the mountain, at which point the operator shut down the ride.

Wilson, a part-time A-Basin ski instructor, says he was on a chair behind the man. About 30 seconds after he unloaded, he realized what was happening to the man who he described as a friend of a friend.

“As he tried to get off his backpack caught, and because he was on the outside of the chairlift, he went around the emergency chairlift shutoff (trigger),” Wilson, 28,  said. “He was not only caught, he was literally being hung by his neck by his backpack. He was hanging 3-feet, 4-feet below the chair. His feet were maybe only about 10 feet off the snow.”

Wilson said he and a few bystanders first tried to create a human pyramid to reach the man, but the group kept tumbling down.

“That’s when I realized — it all kind of snapped together — that ‘I can climb this tower and get to him,’ ” said Wilson, a professional slackliner from Golden who competes all over the world and has won Red Bull events. 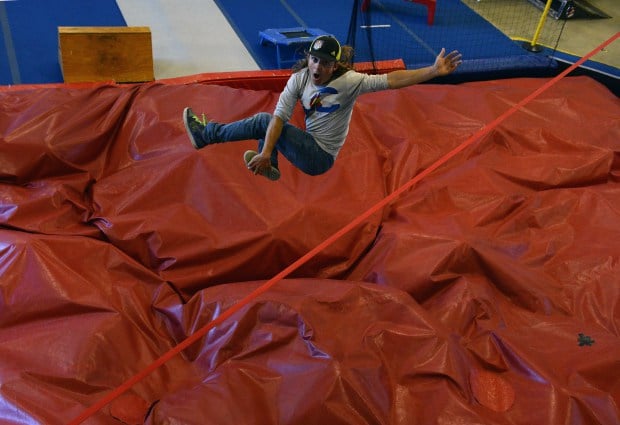 Wilson says he reached the unconscious man in about four or five minutes. Ski patrollers then arrived on scene with a ladder, but upon seeing Wilson, “perfectly tossed me the knife.”

Wilson cut down the motionless man, who fell about 10-15 feet. The drop was captured in a video, with people screaming “Cut him loose!” in the background.

Wilson said his slacklining experience made the rescue possible. “The only way I was able to get to him so fast was to climb the tower and shimmy down the line to him so fast.”

Wilson said bystanders were yelling at him not to climb the lift’s ladder, but “I didn’t listen to them.”

Read about more about Wilson’s heroic rescue at Denver Post.