Single Mom In Tears Over Nasty Note. What Neighbors Do Next Leaves Her Speechless 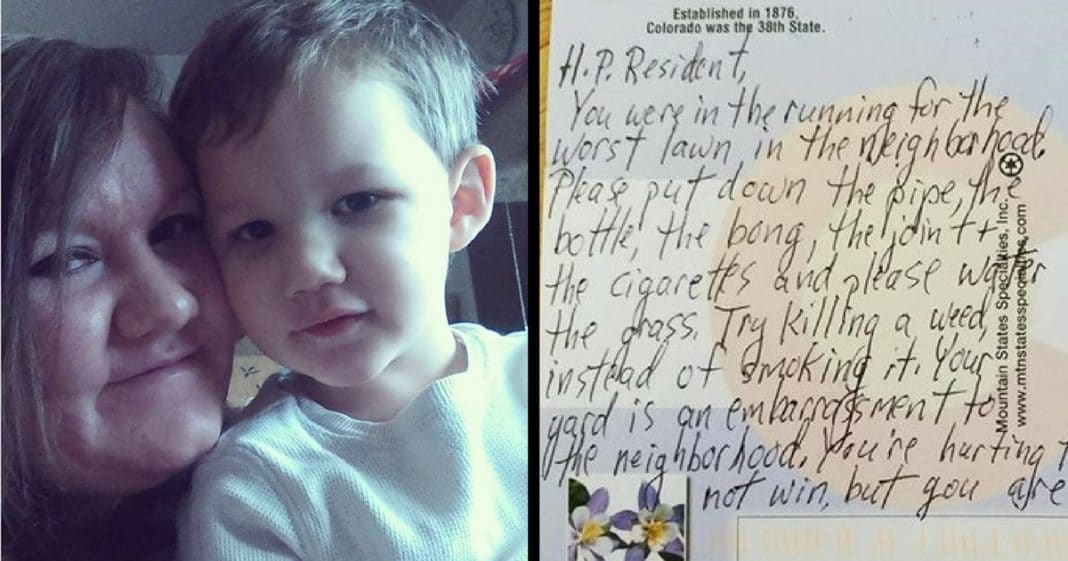 It’s a good rule of thumb for life in general to not judge other people, especially before you know their story. What we see on the surface often hides a much deeper and more complicated reality underneath. Instead of judging, we should seek to understand and help.

Unfortunately, not everyone follows this rule. People are quick to judge, and that often leads to a lot of unnecessary hurt and pain.

That’s what Denver, Colorado, mom Ayrielle Harvey discovered when she came home to a nasty note in her mailbox that left her in tears.

Ayrielle has not had an easy life. The single mom works three jobs just so she can afford to care for her 3-year-old son Emmytt, who has autism, and her mother, who is both blind and deaf.

She also battles some internal demons. The 24-year-old struggles with depression and an eating disorder.

Despite the chaos and difficulty of her life, though, Ayrielle works hard and does everything she can to keep her family afloat.

That’s why this note was so devastating.

When Ayrielle came home and checked the mail she found this postcard from an anonymous sender. When she read it she immediately broke down in tears. 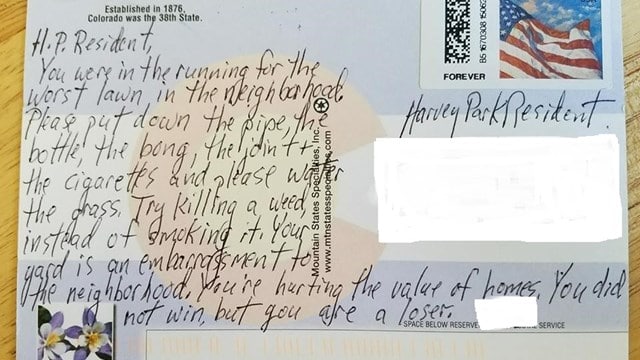 “H.P. Resident,” it read, “You were in the running for the worst lawn in the neighborhood. Please put down the pipe, the bottle, the bong, the joint, the cigarettes and please water the grass. Try killing a weed, instead of smoking it. Your yard is an embarrassment to the neighborhood. You’re hurting the value of homes. You did not win, but you are a loser.”

“I’m going to be honest here,” she wrote. “I’m a single mom with an autistic 3 year old little boy and a deaf blind mom. At 24 I’m not only attempting to work 3 jobs to provide for my family, but I’m also trying to fight my depression and my eating disorder. No my household isn’t perfect but the postcard I received today only proves that people don’t know the full story and don’t care. It broke my heart.”

She said she wishes the person had actually come to her personally so she would have had a chance to explain her situation before being subjected to their judgment.

“It hurt,” she said. “To be honest, I cried. Not only did someone judge my yard, they judged me without knowing me. I didn’t see how someone could do that without talking to me, and asking what was up, what was going on. If I would have been able to defend myself to a real person, it would have worked out better.”

While Ayrielle may never find out who the cruel person behind the nasty postcard is, there is a silver lining to her story. After her neighbors saw her post on Facebook they came together and spent a day helping her get her lawn in shape.

There is never an excuse for cruelty and unkindness. We only hope that Ayrielle’s story will remind people that there is often more to a person’s story than what first meets the eye and words can hurt. Hopefully, others will learn from this and show a little more kindness and compassion.

Were you shocked by the nasty note Ayrielle received? Were you touched by the way her neighbors stepped up to help? So share this!