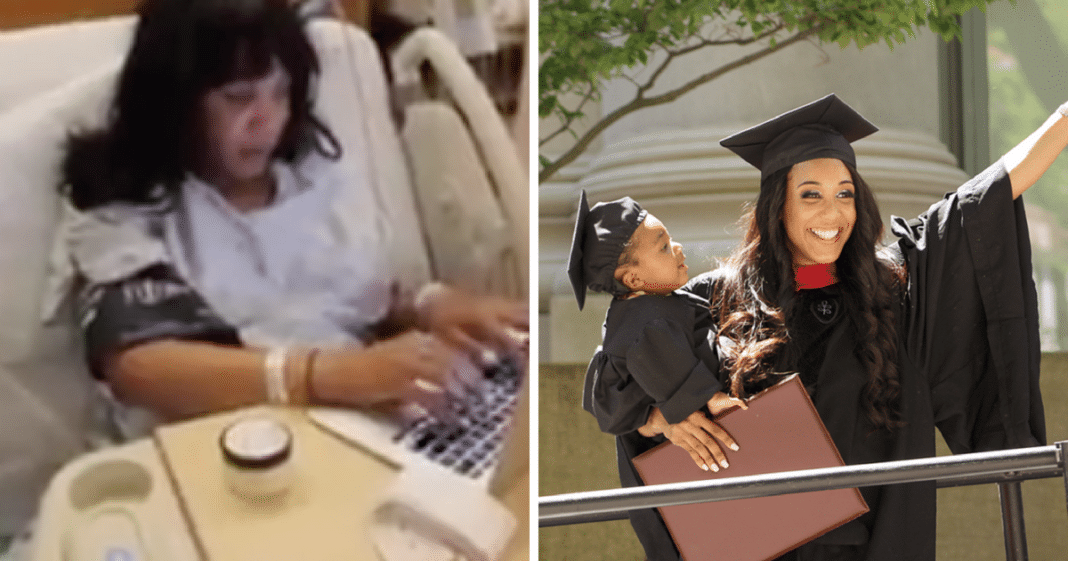 A single mom and student at Harvard law school, Briana Williams wasn’t sure she would be able to get through to her degree. Going to Harvard and becoming a lawyer was her dream, but there were many challenges. How would she be able to juggle the needs of her child in her final year of school while working plus taking part in all the activities, classes, homework, and exams?

Not to mention, in one such final exam, she had to finish it while literally in labor with her child.

Imagine being in labor and successfully completing a tough exam at one of the top law schools in the country. Astonishingly, that’s just what she did! She went on to become the first in her family to graduate from college.

Her fight and fury is fiery Oh but she loves Like sleep to the freezing Sweet and right and merciful I'm all but washed In the tide of her breathing. And it's worth it, it's divine I have this some of the time. The way she shows me I'm hers and she is mine Open hand or closed fist would be fine The blood is rare and sweet as cherry wine.

Although she isn’t a huge fan of social media, which she sees as creating a false overly glamorous version of life for many people, she shared a post on Instagram that connected with and inspired over 22,600 people at the time of this writing:

“I went into labor in April- during final exam period. I immediately requested an epidural so that my contractions wouldn’t interfere with my Family Law grade. And, with tears in my eyes, I finished it. This ‘biting the bullet’ experience is quite quintessential of my time at Harvard.”

I went into labor in April- during final exam period. I immediately requested an epidural so that my contractions wouldn’t interfere with my Family Law grade. And, with tears in my eyes, I finished it. This “biting the bullet” experience is quite quintessential of my time at Harvard. To say that my last year of law school, with a newborn, and as a single mom was a challenge would be an understatement. Some days I was so mentally and emotionally fatigued that I did not leave my bed. I struggled with reliable childcare. It was not atypical to see me rushing through Wasserstein to the Dean of Students’ office with Evelyn in her carriage, asking DOS can they keep her for a few until class was over. If not, she’d just have to come with me to class. Evie attended classes often. So I’m going to be honest with you guys.. I didnt think I could do it. I did not think that, at 24 years old, as a single mom, I would be able to get through one of the most intellectually rigorous and challenging positions of my life. It was hard. It hurt. Instagram can make peoples’ lives seem seamless, but this journey has been heartwrenching. However, I am happy to say that I DID do it. Today, Evelyn in my arms, with tears streaming down my face, I accepted my Juris Doctor from Harvard Law School. At first, I was the anomaly of my [marginalized] community. Then, as a single mother, I became a statistic. Next, I pray that- for the sake of my baby, I will be an example. Evelyn- they said that because of you I wouldn’t be able to do this. Just know that I did this BECAUSE OF YOU. Thank you for giving me the strength and courage to be invincible. Let’s keep beating all their odds, baby.

Briana explained that although we can all celebrate with her today, it was extremely tough as a single mom. For example, she was worried that if people knew she had a child, they would perceive it negatively.

“I didn’t tell anyone that I had a baby,” she said. “I never missed any activity because I didn’t want anyone to think that me having a baby was holding me back.”

Somehow, she had to do it all. It was difficult finding childcare. Sometimes she had to bring Evelyn to class. Sometimes, she asked for help at the university with watching Evelyn until class was over. When it came to going to the doctor, she would try to squeeze in over her lunch break.

“To say that my last year of law school, with a newborn, and as a single mom was a challenge would be an understatement.”

“Some days I was so mentally and emotionally fatigued that I did not leave my bed. I struggled with reliable childcare.”

In the end, she did it all to ensure a better future for her child:

“Evelyn — they said that because of you I wouldn’t be able to do this. Just know that I did this BECAUSE OF YOU,” Williams wrote.

Now, she hopes to go on to be an advocate for others like her who have to beat the odds to achieve their goals in higher education. She’s joining a top law firm in Los Angeles, and her future is bright indeed.

The first time I stepped on Harvard’s campus was for Admitted Students Weekend. Accompanied by family and close friends, I walked into a classroom of about 20 other students who'd also been accepted. I was afraid. What I would soon identify as "imposter syndrome" immediately hit me as I greeted other students who proudly wore name tags that exemplified their ivy league backgrounds. There must have been a look on my face because my dad came up behind me and whispered- "you scared!???" I'm a small-town girl from Atlanta. My mom has six children, and I was the first and only in the family to graduate from college. I went to college with one suitcase and one pair of shoes, holding on to a bible that my older sister had tucked away in my bag. I'd worked full-time as a waitress and bartender in New York to get by. Being in such an intellectually stimulating/ rigorous environment was not only intimidating- I was scared shitless. "Heck no. man!" Is what I responded. "Good," my dad said, "Because you got something they don't got- you're street smart. You're book smart AND you're street smart." During my time at HLS, I've realized how much truth there was to the statement. Despite the institution's structural issues, I found ways that I could appreciate coming from a disenfranchised background. I could look at the law through the lens of a black woman and (eventually), a financially independent single mother. I used this to my advantage. I made sure to engage in courses that contextualized the law with my blackness, femininity, and income strata. I joined organizations, clinics, and fellowships that would allow me to advocate on behalf of those who, like myself, had trouble navigating their way into higher education. I found a community, friends, and a platform in this. Now, I am happy to be joining a top law firm in Los Angeles, where I will not only be a member of the litigation department, but I will have the autonomy to undertake several pro bono opportunities. Daddy, I'm not scared anymore. We made it!

And here is a video from Briana on Twitter, showing what it looked like to be in labor and taking a Harvard exam:

“If I become a teacher, I’m going to tell my students, ‘You guys have no reason not to freaking get this done, get your schoolwork done because I did it in labor. But you know what, I’m going to be really easy-going,” said Briana.

Omg! Found video footage from my having to take my final exam in labor! pic.twitter.com/XGM4Gh4iuQ

This woman is clearly a force to be reckoned with. Her example reminds us that with determination, we can overcome the odds but also that those odds are stacked very high against single women with children in higher education today.