Single Mom Expects A Ticket When She’s Pulled Over, Then Cop Hands Her Slip With Son’s Name On It 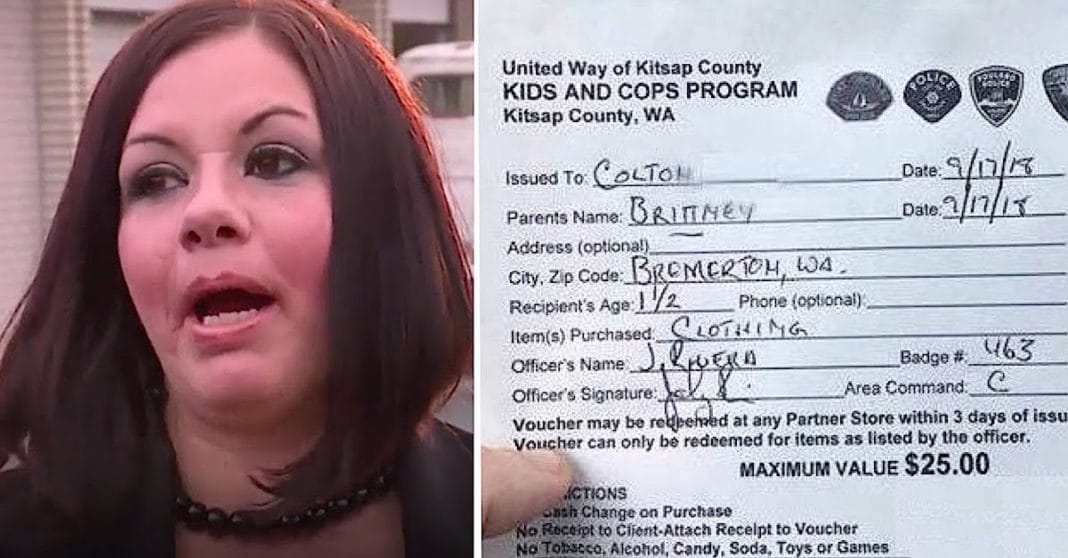 A single mother from Bremerton, Washington, west of Seattle, was having a stressful day. She decided to run to the local convenience store with her 15-month-old son to pick up some essentials like milk when, to her dismay, she was pulled over by police. She wasn’t sure why and has had bad encounters with the police before, but in a few minutes, her faith in law enforcement is restored.

Brittany Payne posted what happened on Facebook, explaining that she was feeling very grateful for the way the Bremerton Police treated her when they pulled her over in mid-September. However, she was initially extremely upset.

“I’m on my way home I see a police officer turn around and flip his lights on. In my head I’m like, “I have my seatbelt on, I’m not speeding…why am I being stopped?”

She broke down into tears as Officer Steven Forbragd approached her car. He explains that she was pulled over because her license plate wasn’t mounted in the back window.

“I tell him ‘it’s a new car and I’m a single mom, and don’t have the proper tool/size wrench to put them on.'”

Soon, Officers Johnny Rivera and Jen Cor happen onto the scene. Instead of giving the exasperated mother a hassle, they immediately went about installing the plates for her. 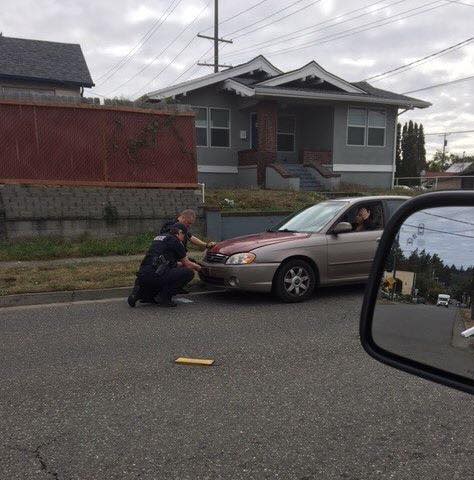 Another officer asks about her son Colton and then proceeds to go back to his car. Instead of writing her a ticket, he fills out a voucher with Colton’s name on it.

The voucher, from the United Way Kids and Cops Program, entitles Colton to $25 dollars at Walmart or Fred Meyer so that he can buy some new clothes.

The mother is overjoyed, and couldn’t resist sharing the story with others.

“I immediately go into tears from this amazing act of kindness! I can say I have been extremely let down by law enforcement and court system in the past due to past life situations but this definitely restored some of my faith in those who are there to serve and protect our community. So from the bottom of my heart, thank you sooo very much to those currently on shift with the BPD, you all just made my day!!!❤️??‍♀️”

Payne says she is a proud survivor of domestic violence who has found herself homeless for a time with Colton. She was expecting more bad news.

“I just thought it was going to be another kick to me and they definitely surprised me,” says Brittany.

Instead, she got a wonderful surprise and she also found out that she and Officer Rivera had something in common: They are both veterans in the U.S. Navy.

Brittany: “…. thank you for your service.”

Officer Rivera: “No, thank you for your service.”

The acts of kindness from these officers went a long way to restore one mom’s faith in humanity and in law enforcement. It also touched many thousands of others who shared the story.

For more, see the video from Q13 FOX Newsin Seattle.