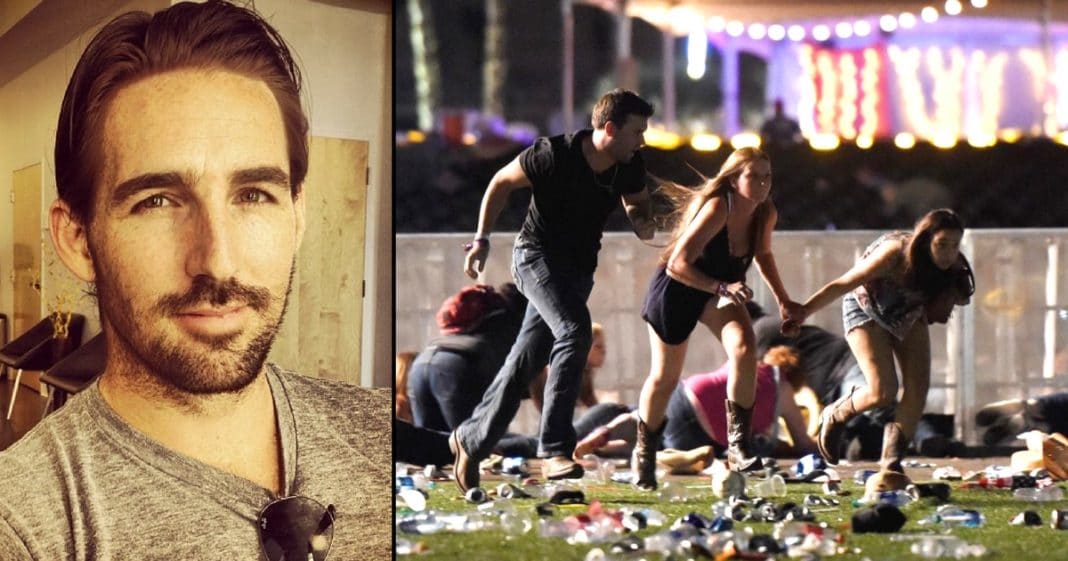 On Sunday night, as hundreds of festival-goers gathered to watch country singer Jason Aldean perform at the Route 91 Harvest Festival in Las Vegas, a gunman opened fire. From his room on the 32nd floor of the Mandalay Bay Casino, the 64-year-old shooter fired a fully automatic weapon into the crowd, leaving 50 people dead and over 400 wounded.

America – and the world – is still trying to make sense of this senseless tragedy. The festival was meant to be a weekend of fun; friends and families had come together to watch some of their favorite musicians perform.

As the world grieves and the loved one of the victims mourn, one of the performers has come out with a bold message of hope for his fans.

Jake Owen, who had taken the stage earlier that night and was watching Aldean perform when the shooting happened, recalled the moment he realized what was happening.

“We were in the middle of it,” he said. “When the shots started being fired, and you could hear it ricocheting off the top of the roof of the stage. We started just running in any direction we could, because you didn’t know where it was coming from.”

When he realized someone had opened fire on the concert, he, along with about 20 others, ran and hid inside a nearby tour bus as the shooting continued for about 10 minutes.

“There’s families out there,” he added. “There’s kids on their parents’ shoulders. And that’s not what America’s supposed to be like.”

Despite the terror that gripped him in the moment and the heartache he has felt since, Owen said he is determined not to let fear hold him back. He has vowed to return to the stage in the wake of the shooting.

“I think it’s our duty as entertainers out here in the world to stand up [to] this sort of thing,” the 36-year-old country singer said. “They can’t keep us down. We’re not going to live in fear, not going to continue to do this, because I think part of being entertainers is bringing happiness to people.”

He added that he is grateful he gets to return home to his 4-year-old daughter Pearl, realizing that many others will not.

If you are in the area and would like to help the victims of the shooting by donating blood, the Las Vegas Metropolitan Police Department said to visit the Labor Health & Welfare Clinic on 7135 W. Sahara.

Some individuals said they were also able to donate at United Blood Services, located at 6930 W. Charleston Blvd. The Red Cross also offers guidance of local places to donate.

Please join us in keeping the victims of this horrific tragedy in your thoughts and prayers.