Shoppers Shove G’ma, Tell Her To Get Out Of Way. Then She Feels Someone Grab Her Hand.. 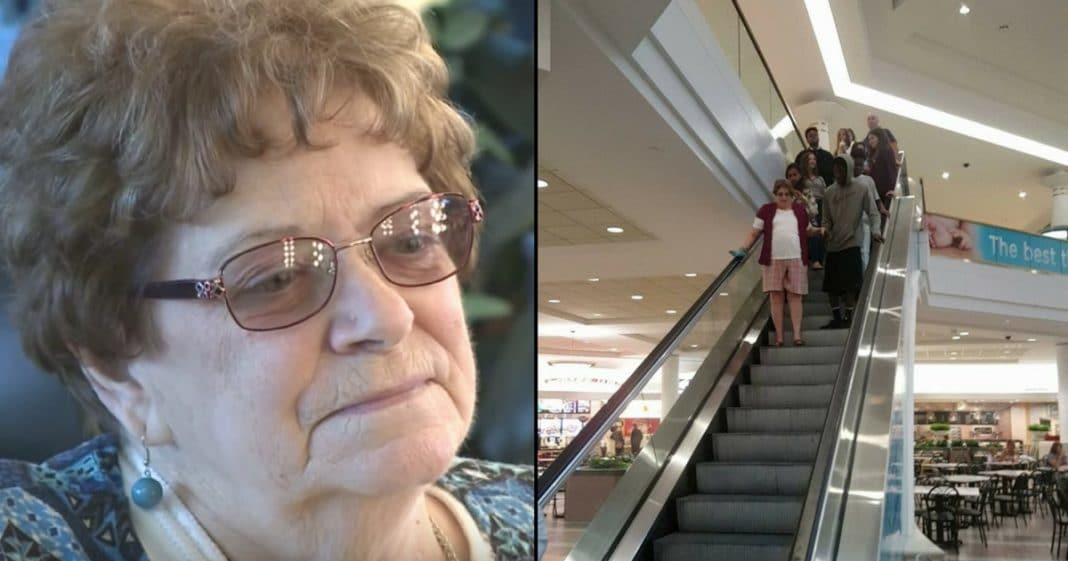 Most of us wouldn’t think twice about stepping onto an elevator, but for some people that small act can actually induce a lot of stress, especially those who aren’t steady on their feet.

That’s exactly what happened to Carma Greathouse. Carma was out shopping with her granddaughter, Leah Kerr, and Leah’s two young daughters when something happened that she will never forget.

Leah was carrying all of the shopping bags and trying to hold both of her girls’ hands as they went down the escalator. It wasn’t until she turned around that she saw Carma hadn’t gotten on.

“I didn’t realize until I stepped on that grandma was too scared to get on,” she said. “I felt horrible as I watched her try again and again to get her footing right.”

What broke her heart even more was seeing how the other shoppers were treating her grandmother. Instead of recognizing she was scared and offering to help, they shoved by her, annoyed that she was in their way.

But as Leah helplessly watched her grandmother and tried to figure out what to do, 19-year-old Alujwyon Williams noticed Carma’s distress. Instead of pushing past her, he grabbed ahold of her hand and helped her step onto the elevator.

Leah was so touched by Alujwyon’s kindness that she snapped a photo of him escorting her grandmother and posted it on Facebook, along with the story.

“Not only was he not ashamed to help her, but held her hand the entire way down and helped her off,” Leah wrote. “Thank you so so much to him.”

“I am the Grandma you helped young man,” Carma commented. “I have polymyalgia and I am afraid I will fall. THANK YOU SIR FOR HELPING ME…Go far in your life and God Bless You! You are my hero.”

“No problem,” he told Leah and Carma, “and I’m happy to be such an impact to you and your family.”

When asked later why he did it, Alujwyon’s answer was simple:

“I can’t see somebody troubled and just walk past them,” he said. “It’s just not me.”

He said he is shocked by the attention he has received.

“I didn’t think me being myself would get so much recognition,” he said. “Thank you all for that and it really was my pleasure. I’m happy to be part of a touching story.”

Carma and Alujwyon have kept in touch over Facebook and they plan on meeting up for lunch. One thing is for sure – Carma will never forget her “angel” and the kindness he showed her that day.

Were you touched by what Alujwyon did for Carma? So share this!