She’s Confused When He Takes Down American Flag, But What He Says Next Leaves Her In Tears 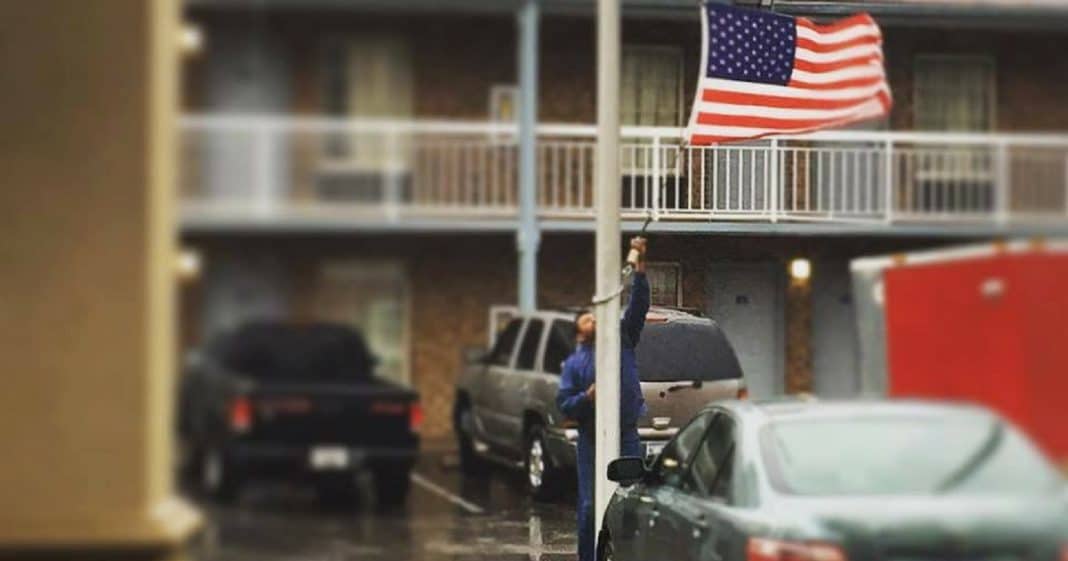 Lights shine brightest when they are surrounded by darkness. This is true in dark situations, as well. When tragedies happen, we see the lights of love, kindness, and compassion shine through in ways we might often miss.

That is what reporter Holly Bounds Jackson discovered when she looked outside her Beaufort, South Carolina, hotel room recently.

Holly was reporting on the impact of Hurricane Irma in South Carolina and was staying at a Country Inn & Suites, along with many other evacuees.

As the sun began to rise that morning, she looked out and saw something that left her in tears. She knew she had to share the special moment, and her story has gone on to touch thousands.

“A quick snap of a moment that really spoke to me today,” she wrote. “The owner of the Beaufort hotel where I’m staying didn’t hesitate to get right to lowering the flag when the sun came up this morning.

“It was raining, he had a hotel packed with evacuees who were mostly on edge. He’s waived his no-pet policy this week in a hotel he took over four months ago. He’s got people trampling through the place soaking wet. Only a handful of employees stayed behind to work. The phone rings constantly. His hotel is leaking. The power went on and off all morning. He brought in a generator and got it working in under 30 minutes.

“Multiple guests told me that when they came to town and nothing was open, he gave them muffins and bananas late at night. His father operates a hotel in Yemassee that was at full capacity. Dozens slept in their cars last night in the parking lot- but he let them eat the continental breakfast and use the restrooms at no charge. ‘There were so many children, of course,’ he told me.”

Holly was so touched by this man’s generosity and kindness in the face of such a stressful and tragic situation that she asked if she could interview him on live television. He “humbly declined.”

When she thanked him for his hospitality, he was quick to apologize for the paint peeling on the ceiling, which he hadn’t had a chance to fix yet.

What touched Holly even more was that this hotel owner and his family aren’t even from America – they came here from India – yet they have gone out of their way to help those in need and take pride in honoring their new country and its flag.

“I hate the storms,” she wrote, “but I love how they always find a way to speak to me in a way I never expect.”

Were you touched by this man’s selflessness, kindness, and generosity in the face of Hurricane Irma? So share this!