She’s Confused When Soldier Walks Into Middle Of Road, But When She Sees Why Her Heart Melts 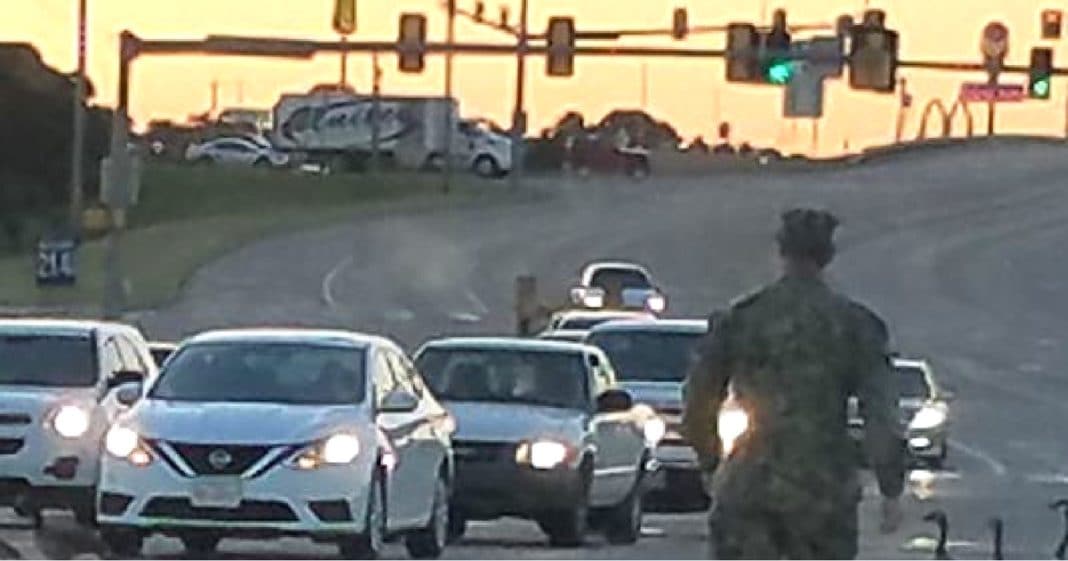 I’m so thankful for the men and women in uniform who serve our country. Soldiers deserve all of our gratitude.

But while the members of our military are usually working to protect human lives, one caring Marine recently went the extra mile to serve another species, and it was all documented by bystander Emily Coker.

Coker was on her way to work when the traffic in front of her suddenly slowed and then stopped. She looked up ahead to see what was going on and noticed a flock of geese trying to cross the road.

Traffic was at a standstill as the geese, ganders, and goslings tried to navigate their way across the busy highway. Coker quickly snapped a photo of the geese, but it’s what happened next that’s really taken the internet by storm.

As the drivers waited for the geese to cross, a Marine got out of his vehicle and helped guide the geese across the road to safety. Coker took some photos of this anonymous man’s act of kindness, which she later shared with friends on Facebook.

Coker later told Inside Edition, “There were some baby geese at the back and they were going the wrong direction. He just walked up behind them and started shooing them.”

The photos were seen and shared by the city’s Facebook page and have been growing in popularity ever since!

Coker wanted to recognize the Marine and publicly thank him, but so far his identity has remained a mystery. She shared this message on Facebook when she posted her photo: “If anyone knows this sweet soldier please tell him thank you for helping the geese family cross 19th!”

While we may not ever find out who the compassionate military man was, we do know that he has touched many hearts with his kindness. In a day and age when people are scurrying here and there, it’s refreshing to see someone take time from their day to help innocent creatures. Our hats are off to you, sir!

Were you touched by what this kind-hearted Marine did to help these geese? So share this!