She’s Confused When Man Runs By With Empty Stroller. When She Learns Why Breaks Down In Tears 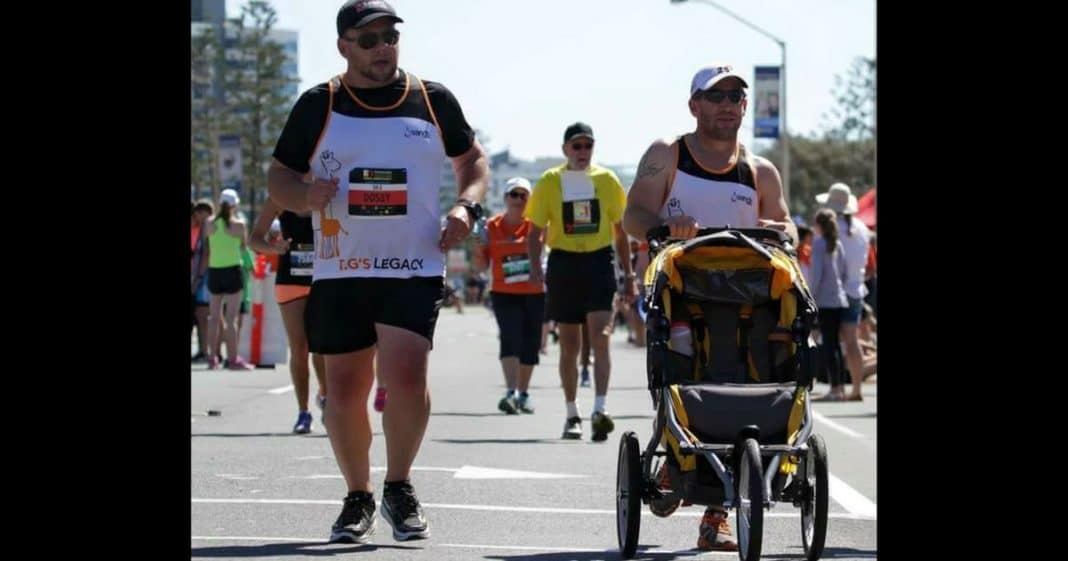 For any parent who has lost a child, they feel this loss for the rest of their lives. It changes them. Even for those parents who lose children to miscarriage or stillbirth, the death of their baby is incredibly devastating and heart-wrenching.

Last month, athlete Troy Austin participated in the Sunshine Coast Marathon in Australia. He ran with two friends and an empty stroller.

Spectators and athletes alike noticed that Troy was pushing an empty stroller. One woman even joked with Troy, calling out, “Hey mate, you’ve lost your kid!”

The woman laughed and joked, thinking Troy was just being silly. But Troy was anything but jovial.

“Hey mate you have lost your kid

“This phrase was a double edged sword, a sentence that was said so innocently at last weekends marathon.

“As we lined up at the start with other pram pushers and there (sic) children, running for great causes. This phrase was said for the first time, ‘Yes that’s the point’ the smile dropped from her face as she came for a hug and apologized. I smiled because at that moment it was the reaction I was hoping for and almost the last time it occurred throughout the day.”

For Troy, there was a reason behind why he pushed the empty stroller. He wanted people to notice and comment. It was all in memory of his son, T.G., who was born at 27 weeks, stillborn.

For the Austins, losing T.G. seems like yesterday, even though they lost him a year-and-a-half ago. Troy’s wife, Kelly, went in for a routine ultrasound and check-up to see that all was well with their baby. That was when they learned T.G. no longer had a heartbeat. Kelly delivered T.G. a few days later and she and Troy held him until the sun rose the next day.

Troy needed to run this race for his son, to show the world that T.G. did exist and he still does – in their hearts.

His friends Brett and Robert, who took part in the marathon, helped Troy by answering questions when speaking became too overwhelming for him.

“As the run continued the onslaught was relentless,” Troy wrote, “crossing over to the second lap I hear on the loud speaker….’Here comes old mate and it looks like he lost his kid.’ More giggles from the crowd.”

How did Troy manage to persevere? What kept him going despite the difficulty of being constantly reminded of T.G.’s passing?

Instead of wallowing in his grief, Troy had decided to change his perspective. That is what helped him complete the race.

“The thought which helped me, though, was telling myself that every time that phrase was yelled out, they were acknowledging that I lost my son,” Troy said. “Parents that have lost a child want to hear their children’s name; they want to know they are counted.

“They were acknowledging that T.G. was my boy.

“You go to the hospital to give birth, knowing that your bub isn’t coming home to his room. His clothes are not needed, his cot is an empty space…We smiled through the heartache because we had our first child, we were a family.”

Too many families know this loss, and it is beyond excruciating. It’s an ache that will always remain.

“My grief comes in waves,” Troy said, “You will be doing something and just get sad, you try and remember holding your son, you wonder what you would be doing.”

The Austins have worked to keep the memory of their son alive. Kelly puts a small giraffe at the table during family events. They’ve also started T.G.’s Legacy, a charity which raises awareness and supports other families who have lost a child through stillbirth. The logo for the charity is two giraffes standing shoulder-to-shoulder. One is small, and the other is large.

Troy ran the marathon to raise awareness about stillbirths. That is why he didn’t carry a sign during the marathon.

The Austins welcomed son Samuel in May of this year and, though they were overjoyed at his birth, in no way will having this child ever make them forget T.G.

“It is like a parent saying ‘Our child died at school today, but that’s okay because we have a good one coming through the ranks,'” Troy explained, “that does not take away from how much we miss his big brother and never will. We will never forget T.G., for he is our son.”

No one can understand the utter pain and emptiness of losing a child except those who’ve experienced it. How fitting for the Austins to take their grief and help other bereaved families during their hardships. We think T.G. would approve.

Were you touched by the way the Austins have kept T.G.’s memory alive? So share this!