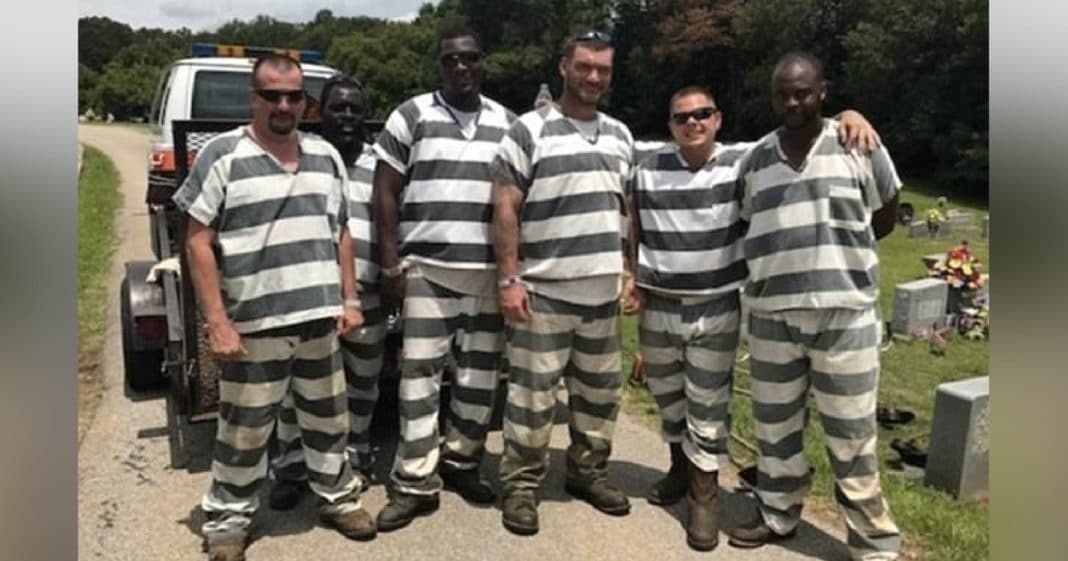 Many of our readers will recall a story we shared recently about six inmates in Polk County Georgia who saved a deputy’s life when he collapsed during a work detail.

The six men were working to clean up a cemetery before Father’s Day on a hot Georgia day when the deputy, who suffers from a chronic medical condition that makes him sensitive to changes in temperature, passed out.

The deputy’s gun, phone, and the keys to the nearby van were all within their reach and it would have been easy for them to escape, but they decided to do the right thing instead.

As one of the inmates ran for help and another used the deputy’s phone to call 911, the other men took off the deputy’s gun belt and bulletproof vest so he could breathe more easily and prepared to do CPR.

The story of their heroic actions quickly went viral. People all over the world were so impressed that these men chose to stay and do the right thing when it would have been easy to run. Many began to call for the men to be released for their good behavior, or at least have their sentences reduced.

Now the sheriff’s office has announced that these men will be rewarded with shortened sentences!

In a post on Facebook, the Polk County Sheriff’s Office commended the men’s actions and compared them to another recent incident that didn’t end so well.

“As we watched the horrific man hunt this week of the two inmates that killed two Correctional Officers and were captured last night we all know that Monday could have ended differently for our Officer,” they wrote. “We are very proud of the actions of all 6 inmates involved.”

Typically, inmates serving time in county jail earn two days of time for each day served as long as they are on good behavior. Those who volunteer for work detail can earn three days, and in special cases, they can earn up to four days.

“Anytime we have a trustee or inmate crew that goes beyond normal duties, we cut them some extra time off,” said Polk County Sheriff Johnny Moats.

The sheriff’s department has determined that these men deserve the highest reward, which will knock a great deal of time off each of their sentences.

In addition to lessening their sentences, the sheriff’s department treated the men to a pizza party in the park. The family of the deputy they saved brought them homemade desserts to thank them for what they had done.

As for the deputy himself, he has been cleared to return to work, and he will be eternally grateful for what these men did to help him that day. He says he always tries to treat them well, and his kindness and compassion worked in his favor that day.

“That moment when they’re out, they’re not really inmates to you,” said the deputy, who wishes to remain anonymous. “They’re just a group of guys and you’re out. You try to be more like friends, and in my case, it just worked out for the better.”

Are you glad to see these men get rewarded for their heroic actions? So share this!