Shelter Dog Lunges Over Fence And Down Side Bank. Seconds Later They See Why 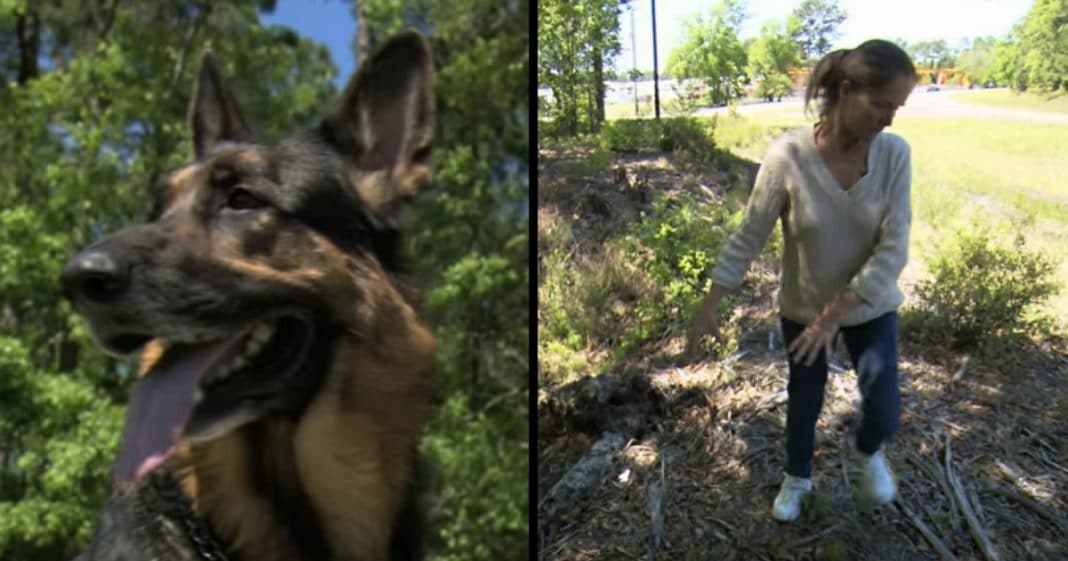 Shannon Lorio was speeding down a windy road in south Georgia one afternoon when her car suddenly fishtailed and she lost control. When she came to, she realized her body had been thrown to the back of the car.

She was in a lot of pain and couldn’t move, but she also knew that where her car was it wouldn’t be visible from the road. She thought she might die there.

All of a sudden she felt a large presence looming over her. When her eyes adjusted she realized it was a dog.

“I was bleeding from my face and my nose,” she said. “All of a sudden, I felt a presence — a really huge presence. He was straddling me. I have watched too many horror movies about werewolves and vampires. I thought he was going to eat me.”

Instead, the German shepherd grabbed Shannon by the shirt and jacket and dragged her out of the car, through barriers, and up the embankment to the highway. Shannon then used his neck to pull herself up and was able to flag down a passing car.

Shannon lost consciousness again and didn’t wake up until she was back in the hospital. They told her there was some hemorrhaging in her brain. Even with the traumatic injury, though, Shannon didn’t forget who had saved her life.

“That dog is always going to have a special place in my heart,” she said. “He’s my hero.”

The dog, who has appropriately been renamed Hero, was signed over to the Thomasville-Thomas County Humane Society by his family because he kept wandering. While that may have been a problem for his previous owners, Shannon knows his escape skills are what saved her life.

Unfortunately, she can’t adopt Hero because she already has six dogs of her own, but she did shower him with love and gifts, including a huge bone and a stuffed animal.

“If he ever needs anything, I’ll be there,” she said.

And we don’t think Hero will be stuck at the shelter for long – more than 50 people expressed interest in adopting him after hearing his story, and dog trainer Heidy Drawdy planned to take him out to see if he is cut out to be a search and rescue dog.

Were you amazed to see what Hero did for Shannon? So share this!