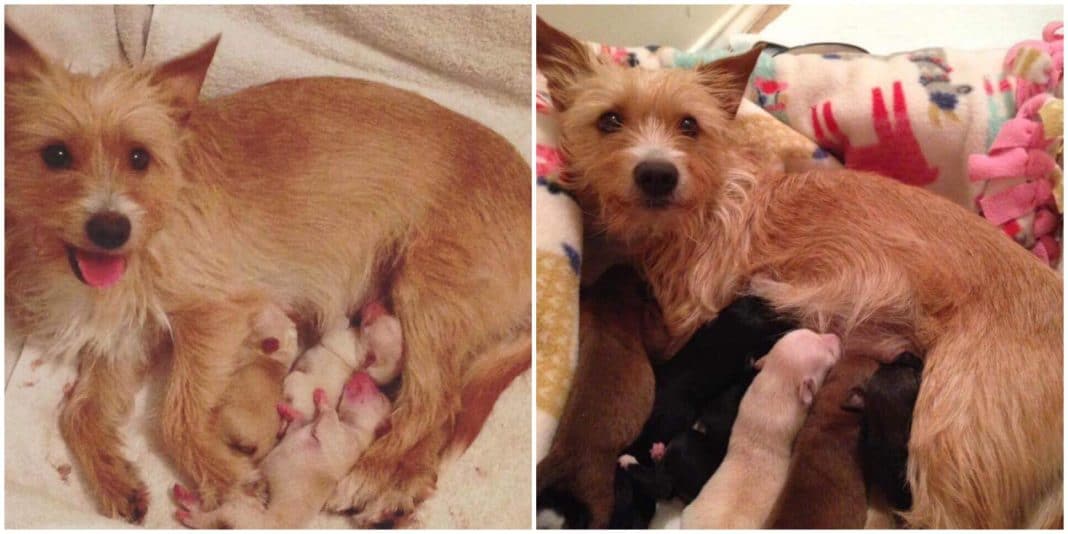 The death of an infant must be one of the greatest pains a mother could ever go through. The level of grief is hard for me to imagine. This pain is not limited to humans. Animals also grieve when their little ones die. Animals can be some of the best and most protective moms when it comes to their little ones because the bond is so strong. One shelter dog knows the pain of losing her puppies, but thankfully she was given a second chance to nurture.

Blossom suffered from advanced heartworm disease and was also pregnant when she was given up by her family to a local shelter. Her treatment for heartworm could not start until she had delivered her puppies. In June all looked well when Blossom gave birth to three puppies rightfully named after flowers like their mother. The pups were given the names Bluebell, Begonia, and Buttercup.

Our sweet Blossom delivered her early summer bouquet yesterday. Presenting Bluebell, Begonia, and Buttercup. Mama Blossom and her three girls are all doing well so far??

Within a few days, sadly Bluebell and Begonia had died. Blossom was very sad and upset. Her human foster mom, Maggie Escriva described Blossom as being “frantic.” About this same time, an act of cruelty happened that Maggie heard about. Six puppies were thrown from a truck. The puppies survived the impact but were now orphans. Two tragic situations were about to merge into a beautiful outcome as Blossom was chosen to raise the 6 puppies.

How do you heal a broken heart? By reaching out and helping someone who needs you. Blossom has been frantic this week…

Maggie shared this on Facebook, “Without missing a beat, she started cleaning and feeding them. Looks like Buttercup will grow up with siblings after all.” In the video posted below you can see what a great mom Blossom is.

Maggie calls the newly formed litter, Blossom’s garden. The puppies were named “Meadow, Fern, Petal, Reed, Forest, and Ash.”  When the puppies are weaned they will be put up for adoption, as will their mother, Blossom after she is treated for heartworm.

Maggie, their caring human stepmom believes we can all learn from Blossom’s story. She shared this advice on Facebook, “Look around and see who needs you, then reach out and help them.”