She Adopts Dog That Reminds Her Of Childhood Pet Dad Made Her Give Up, Then Vet Confirms Her Suspicion 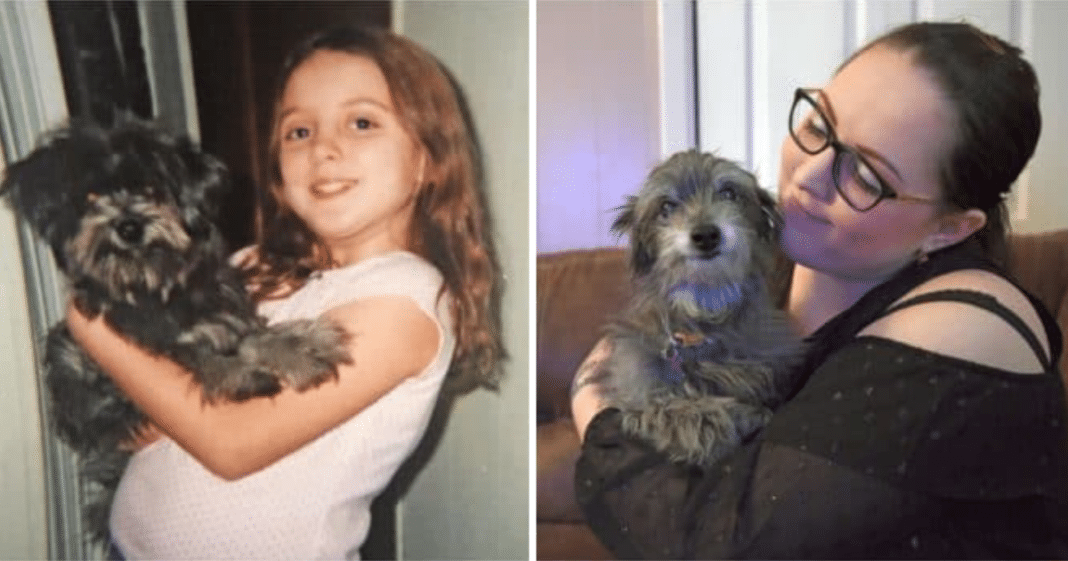 Nicole Grimes lives in West Brownsville, Pennsylvania with her husband and daughter. She’s always loved animals. As a child, her grandmother gifted her with a grey dog she named “Chloe bear.” Sadly, Nicole had to part with her sweet dog.

A friend of Nicole’s on Facebook was looking for a new home for an older grey dog named Chloe. This dog had a face you wouldn’t forget; with those eyes that suckered you in. How could anyone resist?

Nicole couldn’t. She opted to take the dog. Mind you; it was just for sheer nostalgia. This couldn’t be the dog she was forced to return to the Humane Society seven years ago.

When you get a new pet, it’s crucial to get them to the vet immediately for a checkup. Nicole did just that. The microchip in Chloe confirmed Nicole’s vague suspicions and deepest hopes. It was her Chloe Bear!

The KJV Show posted this on social media: “A 21-year-old woman near Pittsburgh saw a friend’s Facebook post last week about an older dog that needed to be adopted. And it looked like a puppy her parents made her take back to the Humane Society as a kid. So she adopted it . . . checked its microchip . . . and realized it’s the SAME dog.”

A 21-year-old woman near Pittsburgh saw a friend's Facebook post last week about an older dog that needed to be adopted….

Nicole had always wondered what had become of her Chloe Bear after she had to give her up. Nicole said that one day, “My dad picked me up from school and Chloe was in the car.”

According to Nicole’s father, he couldn’t stand her continuous barking once he started working from home: “I knew that day was coming because he had been saying we needed to do it. I remember I was so sad  and my stomach was nervous driving her there that day.”

Over the years, she would think of Chloe bear on her birthday, (October 26th), and wonder where she was, who she was with and if she was all right. Nicole has to worry no more. Chloe Bear is back with her first human. Nicole doesn’t believe this is a coincidence, but a sign from her grandmother who died a few years ago.

Chloe lived a good life. She was with an older couple until they passed away. Then she was taken by their neighbor who happened to be Nicole’s friend on social media.

It’s a miracle, but according to Nicole, Chloe recognized her and is adjusting well to her new home: “She’s been so cuddly, and she fits right in here.

“It’s like a part of my childhood came back.”

Talk about providence. How else could such a fabulous miracle be described?