He Spots Something Shiny In Debris, Stops To Pick It Up. Looks Closer At Engraving & Grabs Phone Immediately 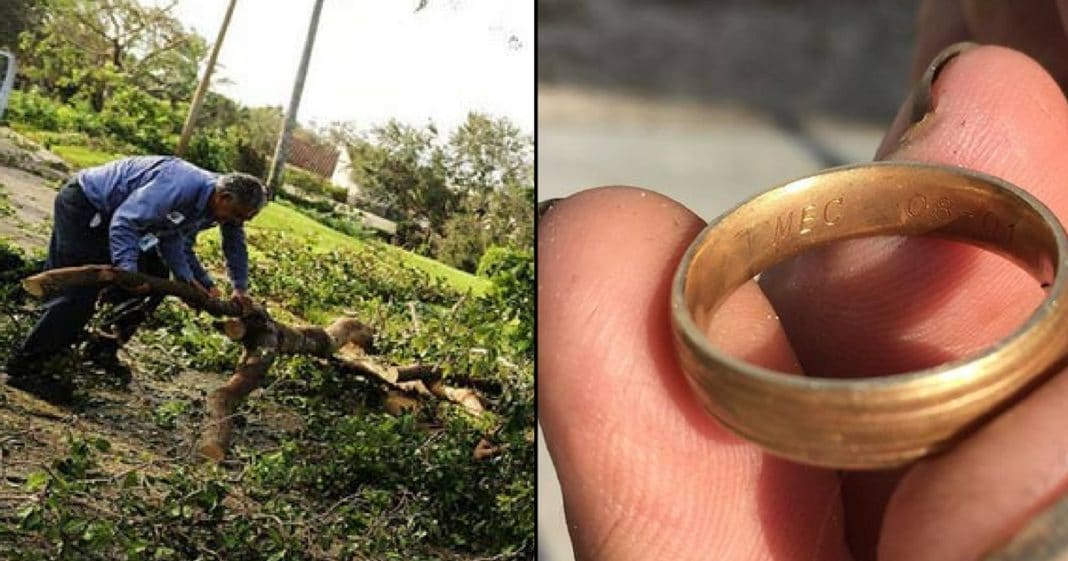 So many people lost treasured possessions when Hurricane Irma ripped through Florida, but one very lucky man actually found something he thought was long gone, and he still can’t quite believe it’s actually home.

Mike Josowitz, who lives in Key Largo, decided not to evacuate when Irma started heading his way. Thankfully, he made it through the storm safely.

On Wednesday morning, Mike and his friend, Shayne Young, went out and began clearing debris from the street and checking on the houses of neighbors who had evacuated.

“Making sure everything was tight and secure for these neighbors’ properties and, you know, just doing a walk around,” Young said.

As they worked, something small and shiny in the midst of the debris caught Mike’s eye.

“At first I wasn’t sure if it was just a bit of debris or a ring,” Mike said. “I mean, from the outside it looks like it could be a ring off of a bottle cap almost.”

When he picked it up, he realized it was a wedding ring. Engraved into the gold was an inscription that read MEC.

Trying to think of who the ring might belong to, he suddenly remembered his neighbor, Marty Coleman, whom he had exchanged numbers with just before the hurricane hit.

Even though he hardly knew Marty, he called him up and asked him if he had lost a wedding ring.

Marty was shocked. He told Mike he had indeed lost his wedding ring – eight years before!

“I didn’t know where I lost it,” Marty said. “I had gone out fishing, and I must’ve dropped it someplace. I had looked through all my pants pockets … I looked every place I could think of. This was really a shock out of the pan.”

When the hurricane came through, it caused a storm surge of 5 to 6 feet on the island. As the waters rose and the winds tore through the area, Marty’s ring somehow made its way back to him.

“It kinda gives you goosebumps a little bit,” Mike said.

“Just gives you a good feeling that good things can happen in the middle of chaos and turmoil and hardship,” he added.

As for Marty, he says he’ll be picking his ring up first thing when he finally gets home!

Were you amazed to see how this ring made its way back to Marty so many years after it was lost? So share this!