He Sees Injured Man Struggling To Get Up Steps. What He Does Next Is Amazing 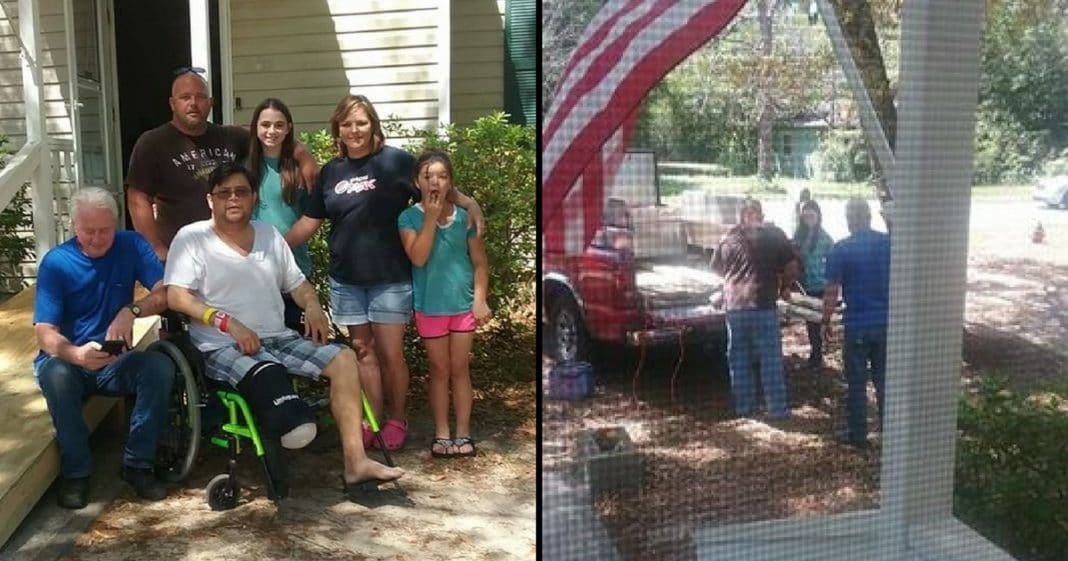 2017 has been a difficult year for Jennifer Austin‎ and her husband. She says he has been in the ICU more often than he has been out of it, and on Monday he had to have his leg amputated just below the knee.

The couple expected him to be in the hospital recovering for a while, but to their surprise, the doctors released him on Friday.

They were excited to get home until they reached their front steps and realized they didn’t have a way to get him inside.

“He didn’t have the strength or balance yet, like he hoped, to use crutches to get up the steps. There was no way I could get him up them with the wheelchair,” Jennifer recalled.

Even with his mother’s help, they didn’t have the strength to lift him up.

As they sat, defeated, on the front steps, they noticed a car slowly driving by. It then circled around and came back to their house, and the man driving it got out and asked if they needed any help.

When they told him what was going on he picked up Jennifer’s husband and took him into the house.

“We were pretty emotional at that time and so grateful for this angel that took the time to help,” Jennifer said.

She thought that would be the end of it, but the next morning the man was back with his dad, asking if they could build a ramp for the house.

“This stranger saved the day for us twice within 24 hours,” Jennifer wrote in an emotional Facebook post. “He also brightened our spirits that had become increasingly dimmed over the difficult months. Like a breath of fresh air he is, and there is a sense of optimism back in our home because of his kindness.

“This stranger, is now a friend…. His name is Steven Smith. We can’t thank him enough and thank God for bringing him to us when he did.”

Were you touched by what Steven did for Jennifer and her family? So share this!