He Sees Frantic Dad Trying To Flip Car. That’s When He Realizes There Are 2 Babies Inside… 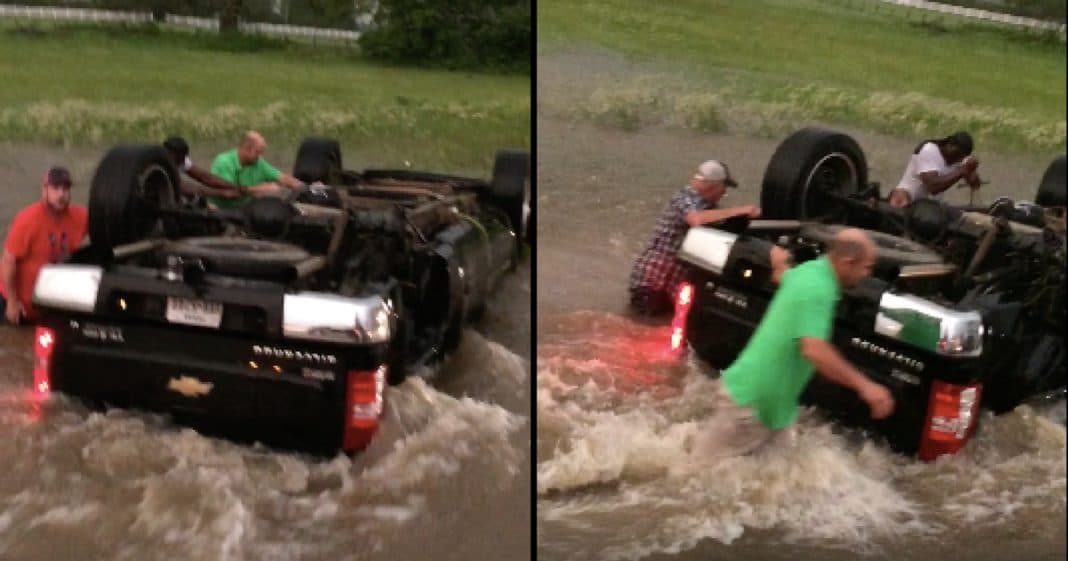 As tornadoes and other severe storms have ravaged parts of the south and midwest, many people have been left fighting for their homes and their lives.

On Saturday, Tom Mitchell, decided to head out to see if there was anyone who needed help after four tornadoes ripped through Myrtle Springs, Texas. As he was driving he came across a scene more harrowing than any he could ever imagine.

A truck was flipped over in a ditch full of rushing water and several men were trying to get inside and flip it over. That’s when Tom heard someone shout something that left him cold – there were two babies inside the truck.

Tom wasn’t strong enough to jump in the raging waters, but he began to film the heart-pounding scene on his phone and waited nearby to see if there was anything he could do.

The water was moving so quickly that the men couldn’t get the truck’s doors open, but finally they were able to reach inside and get one of the babies – infant Marshal Ocheltree – out.

Tom rushed over to grab Marshal, threw his phone in his pocket, and began to do CPR on the tiny baby who was limp and turning bluish-grey.

Though the video shows only darkness during this time, you can hear the chaos of the scene. Tom continued doing CPR on the baby while the other men worked to rescue Marshal’s sister, and a woman can be heard pleading with God to let the baby live.

Tom said that as soon as the woman started praying, he felt a response from the little baby. Soon Marshal was breathing again.

That’s when the men finally got Marshal’s toddler sister, Addyson, out of the car and rushed her over, still in her car seat.

The woman continued to pray as they tried to revive Addyson.

Finally one of the men shouted, “There she goes!”

Addyson was breathing, but she was struggling. Paramedics finally arrived and she was rushed to a nearby hospital where she was put under sedation and given a breathing tube.

Marshal and Addyson’s dad, Phillip Ocheltree, later explained that they had been trying to escape the storms that were still headed their way when their truck hydroplaned off the highway.

He shared that Marshal “is in excellent condition and is full of life,” but said Addyson is still not out of the woods.

“Addy bug right now is [a] fighter for lack of better words,” he wrote. “She is stable and breathing more and more on her own but it’s all up to her as to when she is ready to wake up [and] see everyone.”

“[P]lease please keep my little bug your prayers,” he added.

In an update, Phillip shared that doctors are going to try taking out her breathing tube to see if she can breathe on her own.

“All scans and tests say it looks promising,” he wrote.

He thanked everyone for their “support and prayers” and said “the man upstairs is hearing them loud and clear.”

He knows that were it not for the heroes who jumped into the water that day, both of his children probably would have died.

“I can’t thank you all enough who came into the water and saved my children,” he wrote.

Watch the harrowing video – which has been viewed almost 18 million times in less than 24 hours – by clicking below:

Do you believe God was watching over this precious family? So share this!