After 40 years of ‘disapproving’ looks, professor hits back with inspirational photo of wife 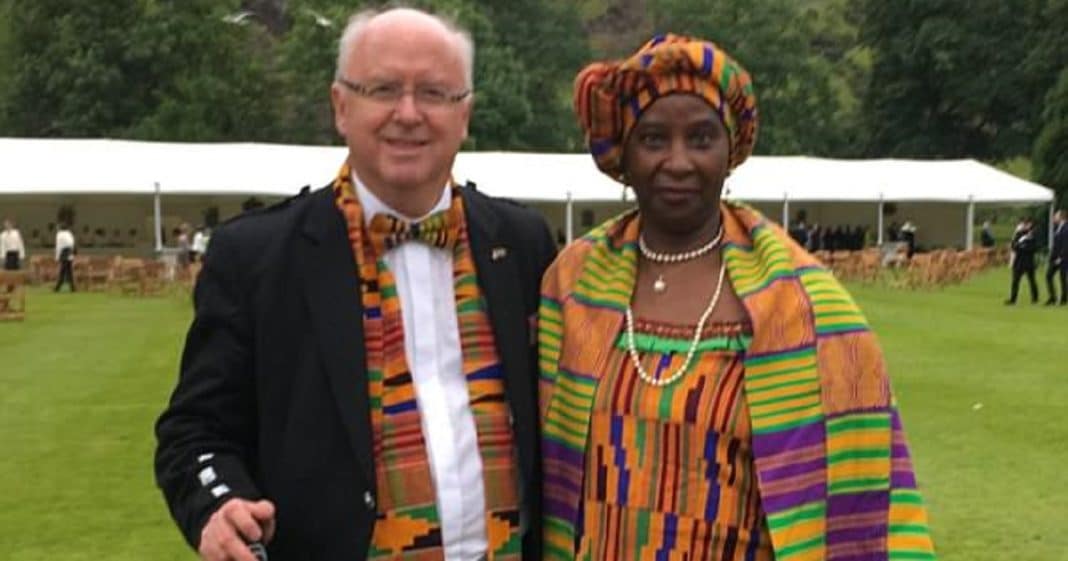 Some photos and videos go viral for all the wrong reasons; but others like this photo posted to social media on Boxing Day by Scottish professor, John Struthers with his wife, Justina have been viewed and shared over 65,000 times.

John and Justina are an interracial couple. Justina is from Ghana. The pair has been together for over 40 years. Despite their wonderful and long-lasting relationship, they have experienced racism over the years.

The photo that has touched so many lives was taken at The Queen’s garden party this summer at Buckingham Palace. John is the Honorary Consul for Ethiopia from Scotland. In the photo, Justina is dressed in colorful traditional Ghanaian dress.

The professor, 64, hopes the photo will inspire others who might also be facing discrimination. The love he shares with his wife is unwavering. He expresses this in the photo’s caption.

We’ve had disapproving looks, ‘we are full’, ‘is that your wife’ and many more actions questioning our relationship over the last 40+yrs

The best way of fighting racism is living your life, standing tall and educating. #Diversity pic.twitter.com/jmd0F0i71r

Many people in their own interracial relationships responded to John’s photo. John says he and Justina have been the recipients of discriminatory comments over the years. Here’s his tweet: @jjstruthersuk, writing: “‘I  thought I would share. We’ve had disapproving looks, “we are full’, :is that your wife” and many more actions questioning our relationship over the last 40+yrs.

“We haven’t wavered! The best way of fighting racism is living your life, standing tall and educating. #Diversity”

Many have called his photo inspiring. one man wrote: “No matter the color, blood, and  heart is the same.

“Someone else said: “You can’t restrict your heart to just one color. It feels what it wants  to feel.”

One woman included images of her wedding to her husband, writing: “Jewish-Muslim family here! Worth  every minute, wouldn’t trade it for the world.”

Some famous faces chimed in, adding their words of support. Duncan Bowie, son of David Bowie, said: “Beautiful couple. 40 years of marriage and not letting other people dictate the terms of it.”

A fellow Scot @TomTheProducer1 showed a stylish photo of himself and his wife, both in traditional dress.

He wrote: “Nice kilt @jjstruthersuk! Here’s my wife and I on our wedding day (I also wore a turban  & sherwani for our Sikh ceremony). I hope we have at least 40+ years of unwavering unity too.  Thanks for sharing!”

One other couple shared they too have suffered nasty racist comments: “You are not alone we have had all sorts of things said to us. Now I know that people  who are not happy in their own lives spend time analyzing and pecking at what they can’t have.”

One woman shared the story of her grandmother who decided to follow her heart in a time when interracial couples were not accepted: “Total respect for you both. My nan was disowned by her family in the early 50s for marrying my grandad who originally came  from Nigeria (she was from Co. Mayo)  She chose love over ignorance and bigotry, and the rest is history #diversity.”

What a fabulous photo. Love knows no color, no race, no class, no disability. It’s true utter acceptance.