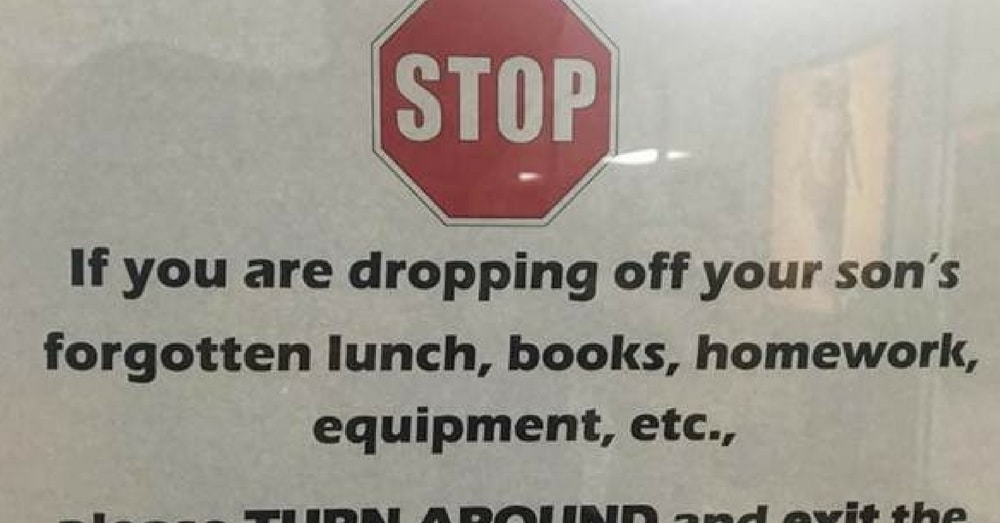 Parents at Catholic High School for Boys in Little Rock, Arkansas, began the school year this month by receiving a letter from principal Steve Straessle reminding them of the school’s decades-old policy against bringing forgotten homework, lunches, or sports equipment to their sons. But after the school posted a picture of the rule on the school Facebook page, it gained the national spotlight.

The reason for the policy is simple, Straessle told TODAY Parents: “Teenage boys will often hit the default switch of calling parents to swoop in and fix problems they encounter. We encourage our boys to fight that inclination and, instead, think how they can solve a problem on their own,” he said.

Straessle, who has five children of his own that range in age from 20 to 9, said that the guideline has a secondary purpose to teach the importance of “soft failures.” “‘Soft failures’ are the times when a boy comes up short,” he explained. “It’s when he forgets his lunch, doesn’t make the team, or faces some sort of consequence for behavior that is beneath his character. Soft failures are learning experiences that are the foundation of becoming an adult. Soft failures have never ruined a life. The lack of soft failures has ruined many lives.”

Jessica Lahey, an educator and the author of “The Gift of Failure: How the Best Parents Learn to Let Go So Their Children Can Succeed,” told TODAY Parents she agrees with Straessle and his school’s policy. “The argument against policies like these — that children can’t be expected to remember everything all the time, and we should not punish them for such lapses — misses the point,” she said. “Childhood is a continual, long-term process of learning how to make our way in the world, and parents who short-circuit that education by rescuing their kids are not doing them any favors.”

Read more about this school policy that is taking the Internet by storm at TODAY.