She Saves Dog After Car Wreck, But Then It Leads Her Back Into The Woods… 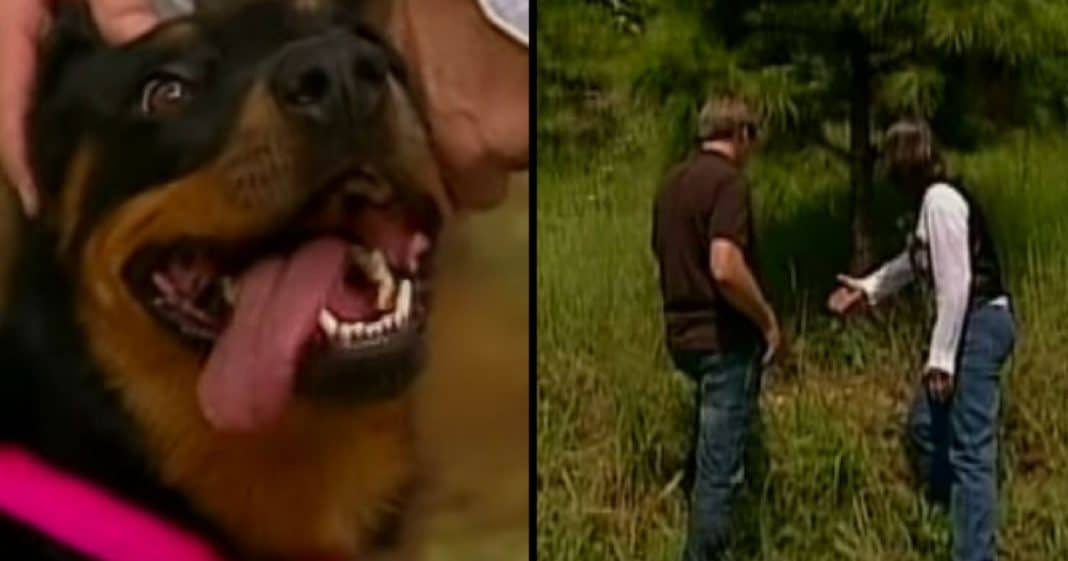 Kathy Wilkes-Myers was taking a walk along a country highway when she spotted a Rottweiler on the side of the road. At first she was cautious, as she often had to deal with dangerous street dogs in her part of town, but as she got closer she realized this dog didn’t seem like the others she had encountered.

When the dog saw Kathy she ran over and leaned against her legs, looking for a pet. Kathy figured the dog had gotten lost or been abandoned by her family. She didn’t look healthy and it was clear she hadn’t eaten in a while.

Kathy decided to take the dog, named Ella, home with her, but something about the way she had found Ella kept nagging at her.

Then one day everything suddenly clicked. Kathy remembered there had been a bad car wreck in the area not long before she found Ella. She wondered if the dog had been part of the crash.

She returned to the spot of the crash with Ella in tow, and as soon as they got there Ella began to tug at her leash, dragging Kathy over to a pile of personal things from the family that she had collected and hidden after the wreck.

Kathy was heartbroken. She knew Ella was looking for her family, but she didn’t know how to tell her they were gone.

She decided to see if she could at least find a relative of the family who would be able to take Ella in so she could stay with people she knew. She contacted the highway patrol for information, and that’s when she learned something stunning…

It turned out that Ella had been thrown out of the car during the crash, but had apparently hidden in the woods when rescue teams came so no one had seen her. Since she knew her family had survived, she stayed at the crash site for 13 days waiting for them to come back, and that was when Kathy had found her.

Were you touched by this story of a stranger’s kindness and a dog’s love for her family? So share this!