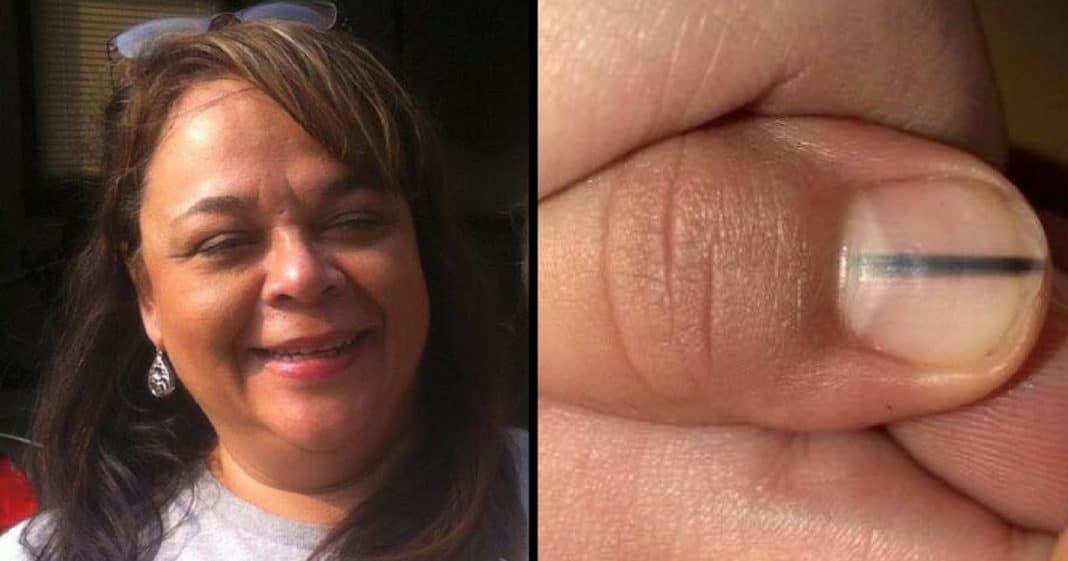 We all need some alone time or days where we pamper ourselves. Life has its stresses, so any opportunity to decompress is important for our overall health.

Summer is the perfect time for us to get our nails done. Many people wear sandals during the warm balmy months, so it’s nice to have our toe nails painted and looking lovely. Rarely, though, do we expect to learn some alarming news while at a nail salon that could affect our immediate health.

Lisa Harrison Williams works at a nail salon. While tending to a walk-in client one day, she discovered something that caused her great concern. The woman had a dark vertical line spanning her entire nail bed. The client wanted Williams to hide it with nail polish that was darker than the line.

The woman indicated to Williams she’d visited many salons over the years and other manicurists had their ideas about what caused this odd line. Some thought it was a calcium deficiency while others attributed it to something hereditary. Williams knew better.

Not wishing to alarm her client, Williams nonetheless told her she needed to consult a physician immediately because she’d seen this before in other clients. The woman did as Williams suggested and, a few days later, called back with some distressing news – she had cancer.

Her specific type of cancer was a skin cancer called subungual melanoma, a rare and aggressive cancer of the nail bed. Symptoms of this disease include nail cracking, bleeding, and brittleness. The unusual pigmentation the woman had under her nail spread into surrounding tissue and skin.

There is a high risk for this cancer to metastasize, so early detection is crucial. This cancer is treated with surgery to remove the affected tissue.

Surprisingly, subungual melanoma isn’t caused by the sun like most melanomas. Rather, it’s brought on by an injury or trauma. Onset tends to be at middle-age and is typically seen in people with darker skin.

A hallmark symptom of subungual melanoma is finding these lines in the thumbs or big toes, but these odd skin pigmentations have also been found to be benign in darker-skinned adults. The best way to know whether it’s cancer or not is to see a doctor.

Williams shared the story on Facebook to warn her circle of family and friends about this cancer and her post quickly went viral.

“Please keep an eye on the nail beds—toes and fingers—-of your elderly loved ones and your loved ones that aren’t physically able to notice changes in the nail beds!” she wrote. “Early diagnosis can make all the difference in the world!!!”

Imagine if Williams hadn’t urged this total stranger to pay a visit to her doctor. Where would she be now? Don’t ignore what your body is telling you. If something looks different or shows up somewhere it shouldn’t, if you do not feel like you normally do, don’t ignore these signs. There may not be anything life-threatening going on, but the possibility is always there. Take care of yourself!

Help us spread the word about the warning signs to look out for so more lives can be saved. Share this!