Runner Breaks Leg In Middle Of Race, Then ‘Angel’ Swoops In And Grabs His Arm 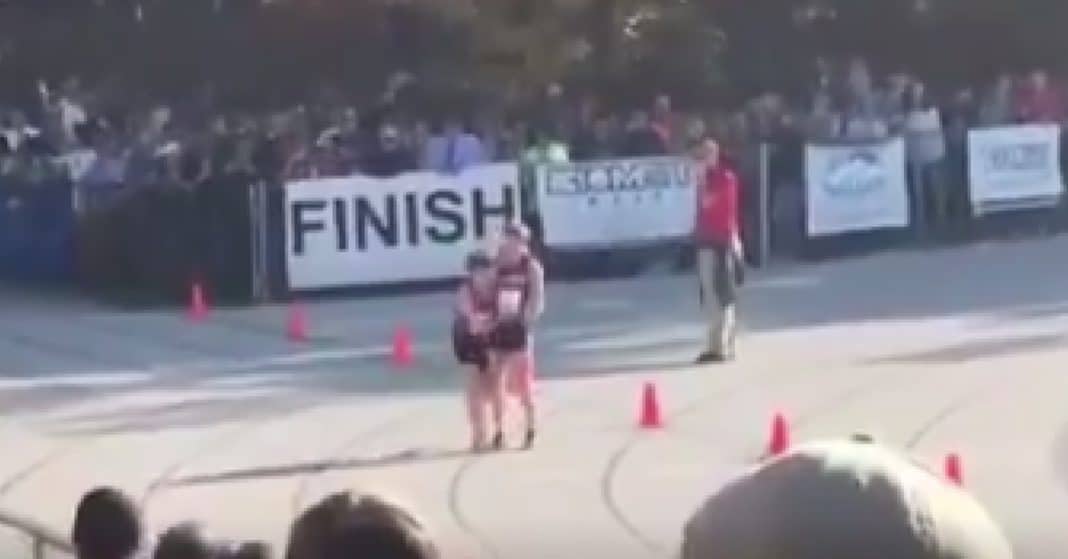 Sometimes, when we are just moments away from a victory, something happens that sets us back a bit. It could be your laptop losing power while you were on the last page of that essay or your cell phone dying right when your car failed to start. Whatever the situation is, it can be quite discouraging and annoying to deal with.

In some cases, those minor (or major) obstacles can come with unfortunate consequences. If you are lucky, though, something or someone will come along that will save you right when you need it.

Take, for instance, high school runner Blake Lewis. He was just about to cross the finish line of an important race when his leg broke. Thankfully for Blake, though, there was an angel in disguise on the track that day.

The Riverton High School senior was 400 meters from the finish line of the Utah Cross Country Championship when a cyst in his tibia ruptured, breaking his bone.

“At like 300 meters it started really hurting and then at 200 I just heard my bone snap,” Blake recalled.

According to his mother, Brooke Lewis, the snap was so loud that she could hear it from where she was cheering. She originally thought he had just stepped on a branch.

Despite the grave pain, there was still a race left that he had to complete. He pressed on toward the finish line, his face contorted in agony.

It was at that moment that Blake’s teammate stepped in – literally – to rescue him from the tortuous race that still lay before him. Sean Rausch put Blake’s arm over his shoulders, trying to help him hop on one leg to the finish line. It didn’t take him long, though, to notice how painful this was for Blake. Changing his method, Sean carried his injured teammate on his back until they both finished the race.

Assisting fellow members of the race is prohibited, meaning both Sean and Blake were disqualified. Sean knew this, yet chose to help Blake anyway.

What a great friend Sean is for sacrificing his own victory to help a teammate in need. Sportsmanship is still alive and active!

Thank you, Sean, for showing us what true compassion and human kindness look like. And Blake, we hope your leg heals quickly and you are back on the track soon!

Were you impressed with Sean selfless display of sportsmanship? So share this!