Rude Customers Hassle Foster Mom At Walmart. What Cashier Does Next Leaves Her In Tears 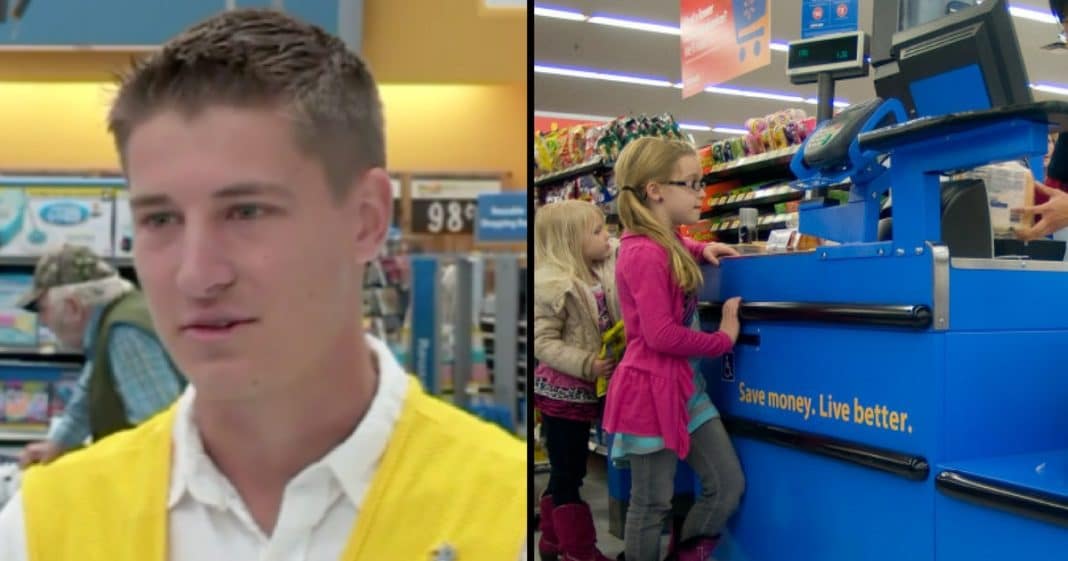 Any mom knows that it can be a struggle to try to run errands with your little ones in tow. They are always reaching for things and pulling you in opposite directions, and if they’re not doing that they’re crying or screaming over an item they want that you’ve refused to buy.

Now imagine throwing an extra wrench into that mix. That’s what this foster mom was facing as she attempted to check out at the Newcastle, Oklahoma, Walmart. Thankfully, an angel in disguise had her back that day.

20-year-old cashier Nicholas Tate recalls seeing the frazzled mom surrounded by three children make her way up to the counter late one Friday night. She apologized as she got up to him.

“Is it one of those days?” Tate asked her, smiling.

The woman told him that she was fostering a baby and had to use WIC, a federal program that provides assistance for low-income families with children, to pay for some of her items. She had just set everything up that day and had never used it before.

“She had a good amount of items and most of them went through, but she apparently didn’t have the right formula and it wouldn’t go through,” Tate said. “We had to run a separate transaction for the rest.”

As the line grew longer behind the woman, many of the customers weren’t quiet about their annoyance over the wait. The woman, who wishes to remain anonymous, wrote about how stressful that moment was for her:

“[There were] more customers, more grumbling and dirty looks as they moved to the other lane and I’m frustrated and trying not to cry,” she recalled.

It was at that point that a woman she knew came up to her in line and, attempting a joke, asked her why she was causing so many problems. In that moment, though, this overwhelmed foster mom didn’t find the humor.

“I told her I was just failing as a foster mom because I can’t figure out WIC and almost burst into tears right there,” she said.

As Tate watched the woman begin to fall apart in line, he felt God telling him he needed to help her. He called a manager over to see if they could help rectify the situation, but had another plan in place in case it didn’t work.

“I already had my card out at that point. I felt like God was telling me to pay for it,” Tate said. “The second it didn’t work I swiped my card.”

The woman was stunned.

“What are you doing?” she asked, her eyes welling up with tears.

Tate just told her that she wasn’t failing as a mom and that what she was doing was an amazing thing.

The incredible young man later said that paying for the woman’s $60 grocery bill was worth every penny because he knew it was the right thing to do.

“When we feel like God is telling us to do something — how many times do we say no?” he said. “In that moment, without a doubt, he was telling me to pay, telling me these people are in need, to help them.”

The woman left the store without getting Tate’s name, so she posted her story on Facebook where hundreds of people shared it and she was eventually able to connect with Tate.

“I have been able to get into contact with this young man… and thank him again as well as his mom and tell her how incredibly blessed we were by her son and thank her for raising such an exceptional young man,” she wrote after their second meeting. “Additionally multiple managers from Wal-Mart have contacted me regarding this issue to figure out who it was, wanting to help make it right and help however they can. As well as someone from WIC.”

Tate said he never expected what he did to go viral, but he’s glad it did because it just confirms that he made the right move that day.

“It made my heart really happy,” he said. “It confirmed that I’m doing what God wants me to do.”

Were you touched by what Tate did to help this foster mom in need? So share this!