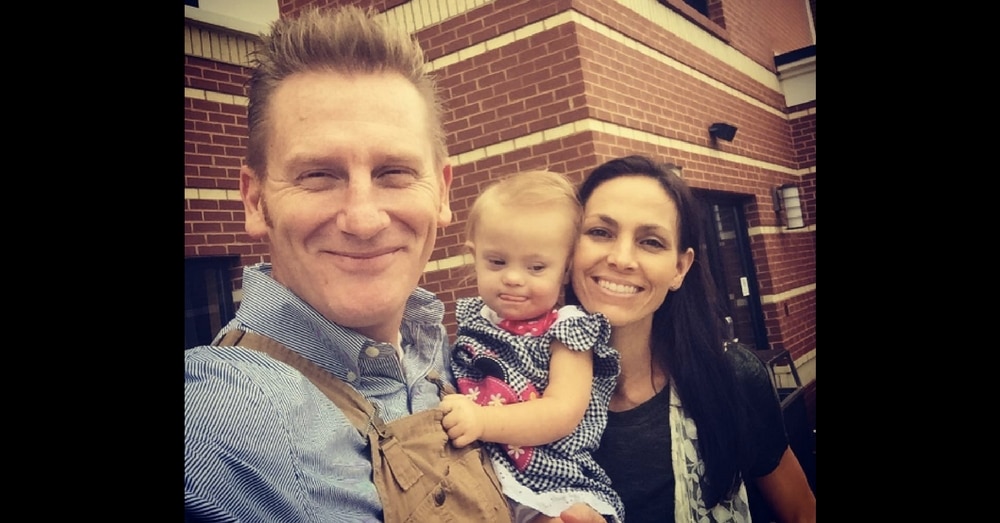 Millions anxiously followed country singers Rory and Joey Feek’s story as Joey bravely battled cervical cancer for almost two years, and they mourned when Joey lost her battle in the spring of 2016.

Since Joey’s death, Rory and their daughter, Indiana, have received an outpouring of love and support from friends, family, and fans. While it doesn’t make Joey’s passing easier, it does help them as they try to move on with their lives.

Rory has been keeping a blog about their journey and has been sharing what life is like as a now-single dad. He said that, while most of the messages he receives are positive, some have been more hurtful, and he recently took to the blog to address those who have told him that his daughter, who has Down syndrome, was a mistake.

He admitted that when he and Joey first found out their daughter had Down syndrome they weren’t really sure what to think and didn’t know how that would affect their lives, but once she was born they realized what a wonderful gift she was.

Many in our culture have been led to believe that a child born with a disability is “less than,” but Rory wants to set the record straight.

“It’s what society has told told them – told all of us… …awe, you didn’t get a regular baby… you got something less… a burden that will last a lifetime,,” he wrote. “And I get it it.  That’s the messaging that is out there most I think.  But it’s wrong.  At least I think it is.  And I know Joey did too.”

“God doesn’t make mistakes,” he continued. “Indiana is not less than any other child.  Different is not less.  Having down-syndrome doesn’t make her life any less meaningful than someone else’s or her dreams or feelings any less important.  Not as a child and I suspect, not in the years to come when she grows to be an adult.”

Between 70-90% of pregnant mothers who find out their babies have Down syndrome choose to abort their child. Rory said he understands why they would choose that path, as they have been falsely led to believe that the child growing inside them is “less than,” a mistake.

“But I don’t believe they are,” Rory wrote. “At least I know Indiana’s not.  When she was born, Joey and I said, ‘this is the child God wants us to have’, and we believed it.  And we were right.  I can not imagine Joey not having those two years to be a mama to Indiana and get to experience the love and happiness that Indy brought to her.  God knew that.  He made it so.  It was His gift to her.  Like Indy is my gift now.  She is the smile on the face of father who should be crying.  She is the joy in the life of a family that should be filled with sadness.”

Rory recently finished putting together a film about Joey’s life and can’t wait to share their story with the world, but perhaps even more important than showing how Joey bravely faced cancer is the light it shines on the value and worth of their beautiful daughter.

“But by the end [of the movie], you – like us – realize that she’s not less.  She’s more.  More wonderful and more precious and even more important to our lives and story than we expected… God doesn’t make mistakes.”

Do you agree with Rory that children with disabilities are not “mistakes?” So share this!