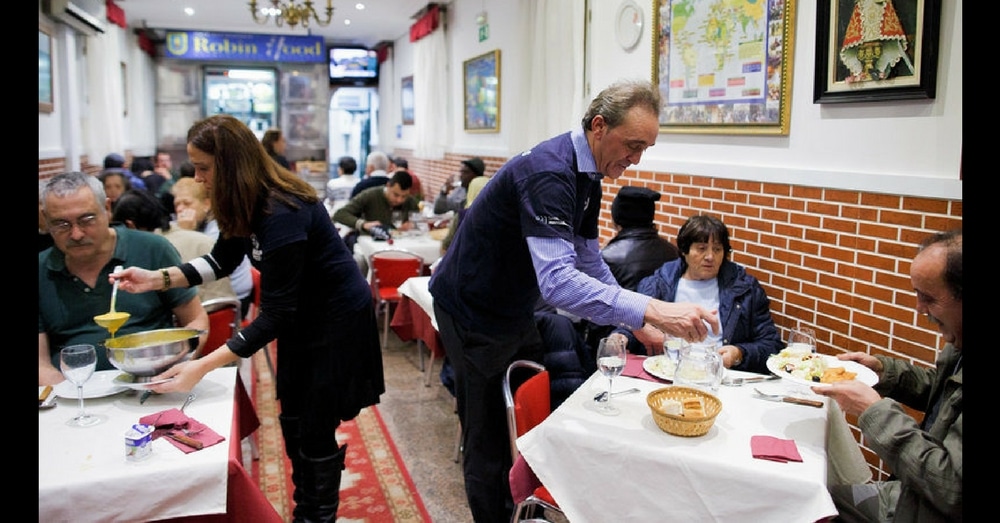 On a frigid winter night, a man wearing two coats shuffles into a brightly lit brick restaurant in downtown Madrid. Staff greet him warmly; he’s been here many times. The maître d’ stamps his ID card, and the hungry man selects a table with a red tablecloth, under a big brass chandelier.

The man, Luis Gallardo, is homeless — and so are all the diners, every night, at the city’s Robin Hood restaurant. Its mission is to charge the rich and feed the poor. Paying customers at breakfast and lunch foot the bill for the restaurant to serve dinner to homeless people, free of charge.

It’s become Spain’s most sought-after lunch reservation. The restaurant has poached staff from luxury hotels. Celebrity chefs are lining up to cook once a week. For paying clients, the lunch is fully booked through the end of March.

The restaurant opened in early December, and is run by an 80-year-old Catholic priest, Ángel García Rodriguez, whom everyone knows simply as “Padre Ángel.”

“I want them to eat with the same dignity as any other customer,” Father Ángel says. “And the same quality, with glasses made of crystal, not plastic, and in an atmosphere of friendship and conversation.”

Outside, there’s a sign listing the house rules: Patrons are allowed to sing as they please, as long as it doesn’t disturb other customers. They can use the free wifi and borrow a cell phone if they need to make a call. They’re free to bring their own food and order only drinks, if they prefer. Or they can take over the kitchen for a birthday party or other special celebration.

As founder of Messengers of Peace, a local charity, Padre Ángel has also converted an abandoned church nearby into a sort of community center. It’s the only church in Madrid that’s open 24 hours a day — with free coffee, television and places for patrons to sleep. He or a colleague celebrates Mass there daily.

Read what the homeless patrons think about the Robin Hood restaurant on NPR.