Restless dogs wake owners at 4:30am, they look outside in snow and immediately realize why 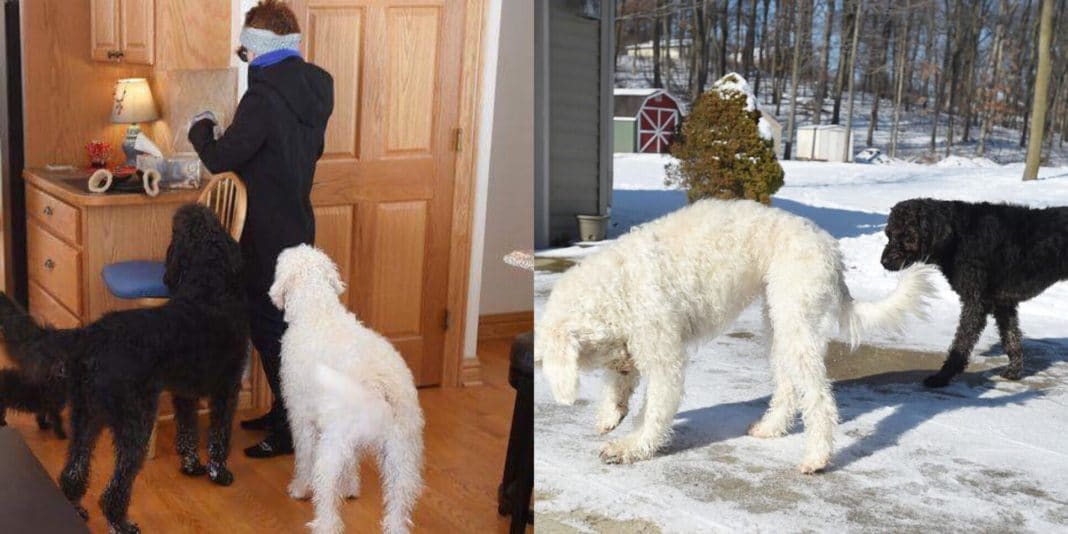 One distressing problem that occurs too often in winter is when older people wander outside their homes and become disoriented. They may suffer from dementia or Alzheimer’s; their families may do all they can to keep them inside, but sadly, some still manage to make it outdoors, only to be found dead and frozen later.

Thanks to two insistent Labradoodles named Adam and Eva and their owners, Lonnie and Susan Chester, one woman’s life was saved. Turning what could’ve been a horrible tragedy for a family to immense relief.

The Chester’s live in Norvill Township, Michigan. Around 4:30 on one recent frigid Saturday morning, Adam and Eva started acting oddly. The two never have to go outside this early. Their owners wondered what was going on with their canines.

The Chester’s caught on to their dog’s unusual behavior, but were more cautious than their pooches: “(Adam) never tugged on my clothes before, so I was cautious about letting them out because I didn’t know if there was anything out there,” Lonnie said.

Before Lonnie could fully open the outer door of the home, the dogs burst past and rushed outdoors. They bolted straight for his truck. On the ground beside it, clad in only a nightgown, was a woman in her late 80’s.

“She looked up at me and said, ‘I’m so cold,'” Lonnie said. “I have no idea how long she had been out there. She must have been terrified.

He didn’t hesitate; Hurrying to her side, Lonnie lifted her in his arms and carried her into his home. He set her on a couch and covered her with blankets before contacting authorities. The woman had been outside in 9-degree F. temperatures.

“It could have been a tragic outcome had Adam and Eva not woken us,” Susan said. “I don’t know how  they knew she was out there.”

Not long after emergency crews arrived, the woman’s family reached the home, asking if the couple had seen her. The family had been searching for her but hadn’t noticed her hiding in the dark and snow. The elderly woman was taken to a hospital and checked over: “I’ve got to give 911 major credit because they were here really fast after I called,” Lonnie said.

Adam and Eva are two smart and good dogs. I’d be proud if they were my pets too: “We’re just so proud of our dogs knowing they may have saved a life,” Susan said. “I hope this  serves as a wake-up call for everyone, especially with it being so cold out.