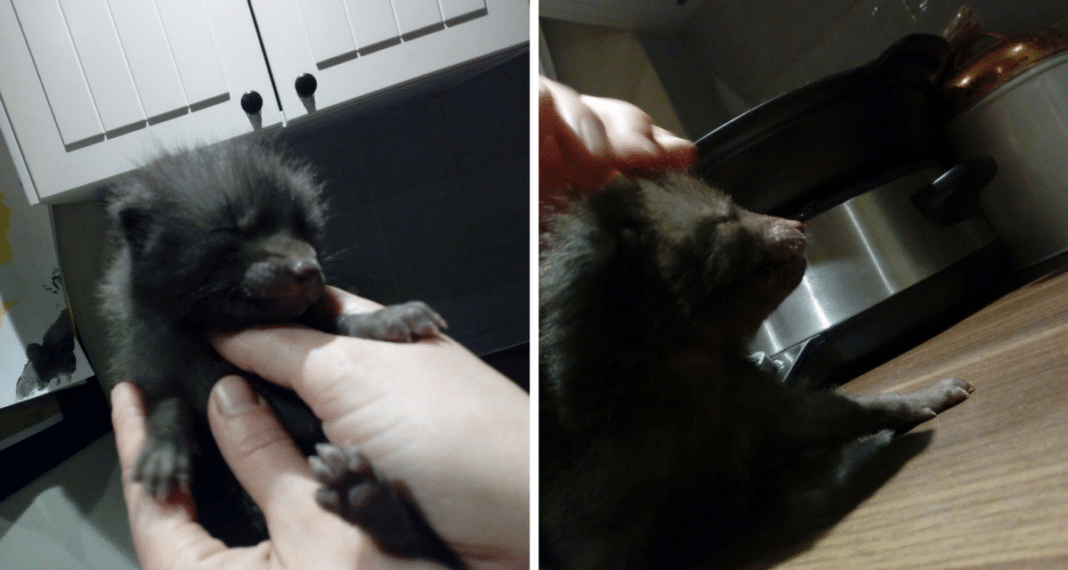 Martine Vos is a volunteer with Cat Shelter Linberg, a group in Belgium. She loves rescuing homeless kitties. She was called out on a mission last week she won’t soon forget.

“A man called our rescue number because he found a very little black kitten, only a few days old,” Vos told The Dodo. “He asked us to come and pick up this little baby.”

Vos and her fellow volunteers would soon learn that everything isn’t what it seems where this kitten is concerned. They searched the area where she was found; no mother or siblings were located. Vos would have to take the abandoned kitten to a foster family.

It was around this time when she noticed something unusual about the deserted kitty.

“When I took the baby in my hands, she seemed really big, and it felt totally different how a kitten should feel,” Vos said. And on a closer examination of her face revealed it wasn’t like a kitten’s either.

Vos and a colleague visited a veterinarian to see if they could help identify the species of their mystery animal. But the vet was stumped too. “The one thing she was sure of is that it was a baby girl,” Vos said.

The volunteer’s next option was to consult a wildlife rescue center. And with that decision, the puzzle was solved. “They recognized it as a baby fox,” Vos said. Fox pups are a darker shade earlier in life, and their look can resemble a cat.

Vos was grateful to learn the animal’s true identity. “Firstly, because I am really interested in the native wild animals,” she said. “And because of my surname ‘Vos’, which means ‘fox’ in Dutch. It was my dream to meet a fox in real life. So holding  this little baby fox in my hands and preventing it from a certain death was a dream that came true!”

How awesome for Vos! Since then, the baby fox has been placed with wildlife experts until she’s old enough to return to the wild.

Though this particular rescue call wasn’t for a feline, Vos is still thrilled to have been involved. “As a volunteer for Cat Shelter, I am committed to help animals in danger or in need, especially the very young kittens,” she said. “In this case, it made me feel good that I was part of the rescue of this baby. Now she has a good chance to get a life in her own habitat. And I hope she  will be released into the wild again and have a lot of baby foxes of her own.”