Rescuers Save Drowning Donkey, But Way He Thanks Them Has Them In Stitches 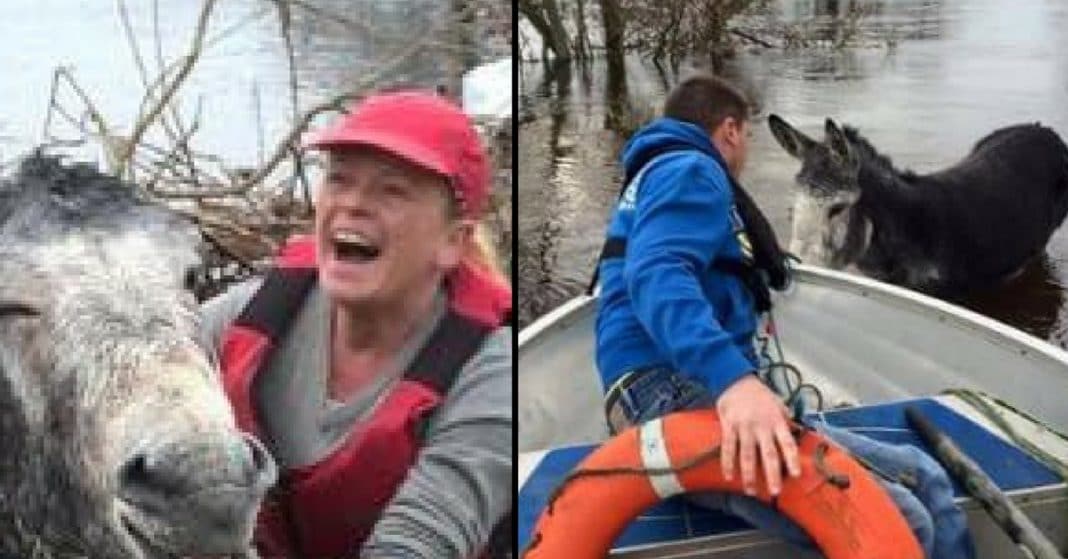 Recently, many different countries and islands have faced natural disaster after natural disaster. Some have been lucky enough to escape the severity of the troubling conditions, but others not so much. These natural disasters come with expected damages and preparing for them can be quite difficult…especially when you have animals.

In Killorglin, Ireland, a violent storm came through and swept one man’s gate away, releasing his donkey into the flood. The owner of the donkey anxiously contacted Suzanne Gibbons, founder of Animal Heaven Animal Rescue, to see if she could help save his donkey.

With the intensity of the floods and the size of the donkey, Suzanne knew this wasn’t something she could do on her own. Immediately after receiving the call, she went to social media to enlist assistance and find supplies. She would need some strong men, rope, and a boat to bring the donkey back to land.

Thankfully, her call was answered!

“At first I couldn’t find anybody willing to help me go in because the river was flooding really badly,” Gibbons told BuzzFeed News. “But luckily, Mike Fleming of the Killorglin Rowing Club soon came to offer his help.”

Suzanne, Mike, and another man named Declan got in a boat and set out for the donkey, recording the entire rescue on a cellphone. They tied a rope around a life preserver and placed the life preserver around the donkey’s neck, using the other end of the rope to pull him behind them as they traveled through the overflowing river.

Once the team arrived back on dry land, everyone was joyous…but none more than the donkey. In the pictures taken after the rescue, you can literally see the smile on his face.

A post about the mission, featuring the adorable photos of the happy donkey, quickly went viral and had people from all over falling in love. The donkey, who has been named Mike in honor of the man who lent a hand to save him, was taken to the rescue center where they fed him and gave him antibiotics to block pneumonia and other illnesses. Today, he is doing A-okay!

Despite the scary circumstances, no hope was lost in the storm. We are so thankful for the people who were able to get this donkey back to his owner safe and sound. Great job everyone!

Did you love seeing these adorable photos of Mike the donkey as much as we did? So share this!