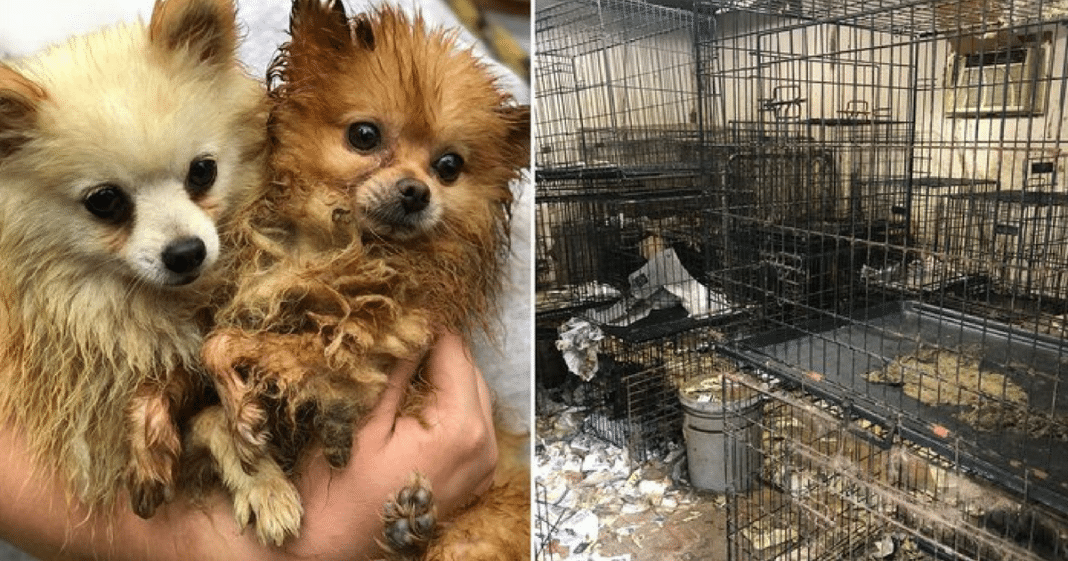 Thanks to an alert, concerned individual, 83 dogs have been rescued from a filthy puppy mill in Trussville, Alabama. On July 2nd, Alabama’s Greater Birmingham Humane Society, (GBHS), entered a house of horrors.

Courtney Underwood is Director of Marketing and Outreach at the non-profit agency. She and the other rescuers didn’t know what to expect when they entered the residence. Was this a hoarding situation that got out of control?

No. It was something much much worse. Inside the home was a puppy mill operation. “Many of the animals, some of which are in the late stages of pregnancy, were crammed two to three in a wire cage. Dogs were together in stacked inadequate, wire-bottom cages and crates caked in excrement and filth. Most of the dogs are suffering from abscessed teeth and gum infections, along with other illnesses,” GBHS shared in a statement about the rescue. “The stench permeating the grounds was so bad, officers had to cover their mouths and noses. All of the dogs’ fur was so  matted with dirt and waste that volunteer groomers had no choice last Tuesday but to shave the dogs  in order to treat skin irritations caused by them standing in their own urine and feces for extended periods of time.”

Some of the dogs were just days old. There were many breeds in the mill including Pomeranians, Chihuahuas, Dachshunds, Schnauzers, Boston terriers, Yorkies, Pekingese and Shih Tzus. It was a monumental task to transport them to the GBHS. But standing by were vet techs, volunteers and veterinarians waiting to administer exams, heartworm treatment, flea and tick medication and other medical care.

For now, all the dogs will remain at the shelter until their dental issues are resolved, and the pregnant dogs give birth. All the rescued pooches will be placed in foster homes and eventually, forever homes, but not until they are healthy and happy.

Courtney spoke of the emotional toll this rescue has taken on her and how she’s overcome it. “I’m no longer going to mourn the life that they have missed, I’m going to be proud to be a part of what’s next,” she said about the dogs.

Some of the animals have already found joy. “I went from seeing them at their lowest point on Monday night to spending the entire day Tuesday working alongside a team of general volunteers and volunteer groomers to bathe and groom every single one of them. I watched as they got to run around in the grass and bask in the sun. They got cuddled and kissed and carried around like infants,” she added.

The dogs past isn’t easy to forget though. “In this case, it appears breeding money was more important than the health and well-being of the animals. And that is the very definition of a puppy mill operation,” Allison Black Cornelius, Chief  Executive Officer of GBHS, said in a statement.

Now more than ever, GBHS is backing a bill against puppy mills. As for the former owners of these dozens of dogs, they aren’t facing charges. This might be a surprise to many, but they voluntarily surrendered the dogs to the GBHS. They’ve also agreed to pay a $25 surrender fee for every dog. They could face charges if they don’t pay.

Courtney hopes the rescue of these dogs will shed light on puppy mills. “A puppy mill can be right next door to you. In your neighbor’s backyard, basement or garage. When they are busted it is the nonprofit shelters and taxpayers that foot the bill,” she said. “A puppy mill is any breeder that puts profit over the animal’s health and well-being.

“Only purchase a dog from a reputable breeder. Check out their facility and the dogs their selling. What are the conditions of the dogs and their environment?

“Support puppy mill legislation with your money, your time, and your vote. These laws regulate breeders and provide some kind of ‘seal of approval’ or licensing that assures consumers they are dealing with an inspected breeder,” Underwood advised. “Responsible breeders do not have a problem with being inspected, it culls the bad guys out and elevates good breeders giving them a competitive advantage. Ask yourself why any responsible breeder would be opposed to inspections of their kennels and practices?”

To help support these 83 dogs specifically, you can donate to the GBHS. If you’re interested in adopting one of the dogs once their ready for this step, check out the organization’s website and Facebook. And please do share this story. Let’s help find these, and all shelter dogs loving forever homes.