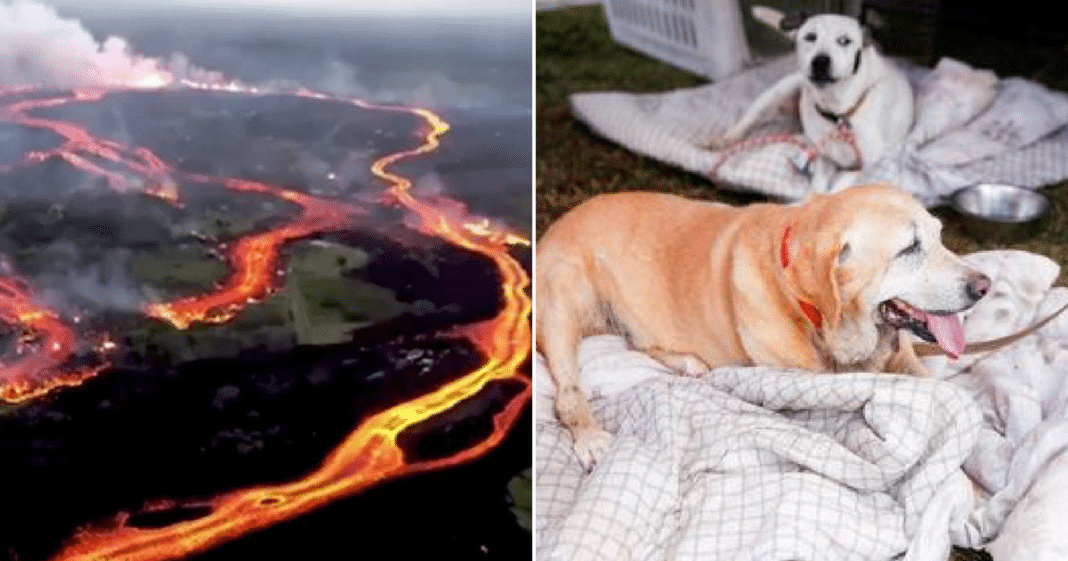 Hawaii’s Kīlauea volcano has been releasing toxic gasses, opening new fissures, and sending out streams of lava. Strange blue flames burn from cracks in the streets, as fountains of lava erupt from the ground.

It’s an apocalyptic scene. Over 2,000 people have evacuated and residents have been warned about flying balls of lava and acidic volcanic smog. To make matters worse for these residents, many had to leave their beloved pets behind in the evacuation.

Now rescuers and volunteers are working to find the missing animals and reunite them with their families at a time when the bond between them is the one thing offering a sense of stability.

After Hawaii’s Kilauea volcano erupted, many were forced to leave their animals behind.

But determined volunteers are working to reunite furry family members with their humans.https://t.co/RZM9X09tw8

The rescuers have saved what is being called a “virtual Noah’s ark” of all kinds of critters, from livestock like cows to exotic birds.

The Red Cross shelter in Pahoa, about 40km east of the volcano, has by itself saved 100 dogs and 30 cats, along with bunnies, birds, and pigs.

“Quite the crazy farm right now.”

“We are housing everything from wee little creatures to ginormous beasts and no trouble. With that many personalities mixing it up, it’s been amazing.”

The volunteers and rescuers are going into the abandoned neighborhoods to find all the pets they can. Using the lure of food and water, they hope to find as many of the frightened and disoriented animals as possible.

But the best lure of all: The sound of their owner’s voice.

“Ideally, we take the owner back in so they can hear a familiar voice and we can hand-trap them,” rather than luring them into cages.”

“We are trying every trick from every book.”

Meanwhile, livestock is being taken in by the Hawaii County-funded Pana’ewa Rainforest Zoo and Gardens, who have rescued more than 30 to 35 cattle and horses.

More than 1300 head of cattle and three dozen horses have been relocated to a ranch north of the area.

The livestock is even more out of sorts than the pets:

“From the earthquakes to the smoke and lava to the helicopters overhead, they are just spooked.”

Posted by Hawaii Island Humane Society on Wednesday, May 23, 2018

At an animal shelter at the county parks and recreation gym in Pahao, families are camping out with tents for some sense of privacy and to keep dogs away from each other. The gym has a donation table where stacks of dog food and cat litter have piled up thanks to a generous community.

The local community is chipping in with the costs of the animals’ care, supplying needed items like kennels/crates, food, sheets and towels, leashes, collars, bowls, and toys.

The Hawaii Island Humane Society set up an Amazon wish list for donations.

For those of you that may not be here on the island, but would still like to help the pets affected by the volcano, we…

Posted by Hawaii Island Humane Society on Friday, May 11, 2018

The Humane Society volunteer noted that during this stressful time, that reuniting displaced families with their animals is perhaps the best therapy of all.

“They both get something from it. Sometimes they have lost every single thing they own other than that dog or cat. It’s the one piece of home they still have, the one piece holding them together. And the pets feel the same way.”

The efforts of all the volunteers and rescue groups are making a big difference during a time of crisis for Hawaii.