Rescue Dog Refuses To Sleep On Brand New Bed, Then She Learns The Heartbreaking Reason Why 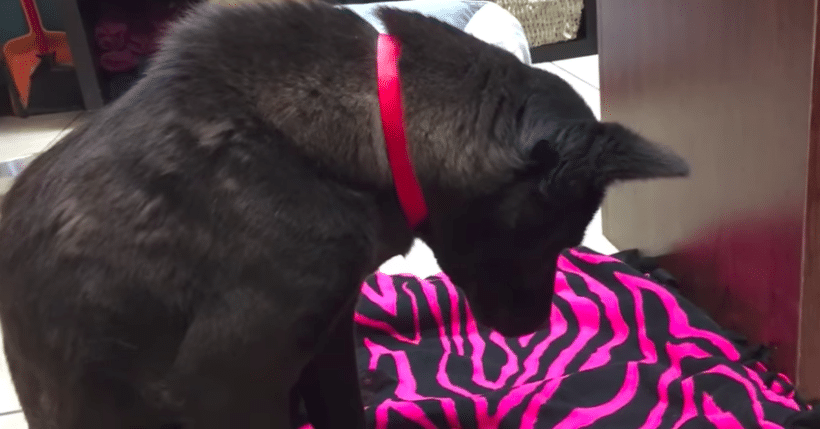 Harriet, a 3-year-old Korean Jindo, was one lucky pooch who was rescued from her fate and flown to the United States. She and 13 other dogs were sent to San Fransisco and watched over by the Humane Society of Tampa Bay, Florida.

The conditions at these meat farms are utterly deplorable. Sweet Harriet, along with around 200 other dogs, lived day-to-day stuffed in kennels. They were forced to stand and live in their waste. Food wasn’t set out for them, but thrown to them.

“They did have shelter from the elements, but they didn’t have anything on the sides to keep out the wind and the snow,” Nash McCutchen, marketing coordinator for the Humane Society of Tampa Bay, said. “They had no soft bedding. All crammed in there. They were living in their own filth. Food was thrown in to fatten them up.”

If Harriet hadn’t been rescued, she would’ve ended up on someone’s table. Dogs on these farms aren’t slaughtered humanely. “They’re tortured, and they aren’t always dead when they skin them,” McCutchen said. “It’s a terrible existence.”

Though Harriet is now safe, she still suffers the trauma of her previous environment. “When she first got here, she was pretty despondent and aloof,” McCutchen said. “She was interested in humans in that she would look at us, but she didn’t initiate any interaction, and she didn’t seem to want any interaction for the first several days.”

It took Harriet around a week to gain the courage to walk to the front of her kennel. This was a good sign, as McCutchen explains: “Some of the other dogs won’t even do that – they just stay back in their kennels, with their backs against the walls.”

The shelter staff tried getting Harriet outside to play in the yard. “We had to carry her out because she didn’t know how to walk on a leash,” McCutchen said. “None of them do.”

Open spaces seemed to frighten Harriet. She’d stand stock still as though she wasn’t sure what to do. Despite her problems, the staff refused to give up on this brave lady.

Leslie Menichino is the shelter’s volunteer manager. She opted one day to remove Harriet from the stress of the kennel to allow her to de-stress and relax. She brought Harriet into her office. Harriet responded with uncertainty.

“She just stood in the middle of the office on the blanket that I had laid down,” Menichino said. “After a short while, I saw her starting to doze off standing up. That is when I grabbed my phone and started filming.”

Harriet continued to sleep standing upright until Menichino showed her how to lie down on the fuzzy blanket. This served as Harriet’s very first bed.

“We think that when she was on the farm, they were all so tightly packed in that they’d fall asleep standing up, and the others would hold them up,” McCutchen explained.

It didn’t take Harriet long to love her new bed. She snoozed contentedly for a few hours.

“Being a witness to it brings tears to my eyes and such happiness,” Menichino said.

Harriet has come a long way since her horrible life at the dog meat farm. She still has a long journey ahead of her until she’s ready for adoption, but the staff is sure she’ll do just fine.

“Just in the past three days, she’s made progress,” McCutchen said. “It might just take a little longer than a normal dog.”

Harriet has learned to walk on leash and even takes treats from the hands of staff members she’s familiar with.

We’re so relieved Harriet’s been removed from her miserable life at the meat farm. No animal should be mistreated or used so horribly. We hope Harriet will soon find a forever home filled with love, treats, and plenty of soft, comfy doggy beds.

Were you happy to see Harriet rescued and shown love for the first time? So share this today!