Repo Man Comes To Claim Elderly Vet’s Car, But No One Expected What He Does Instead 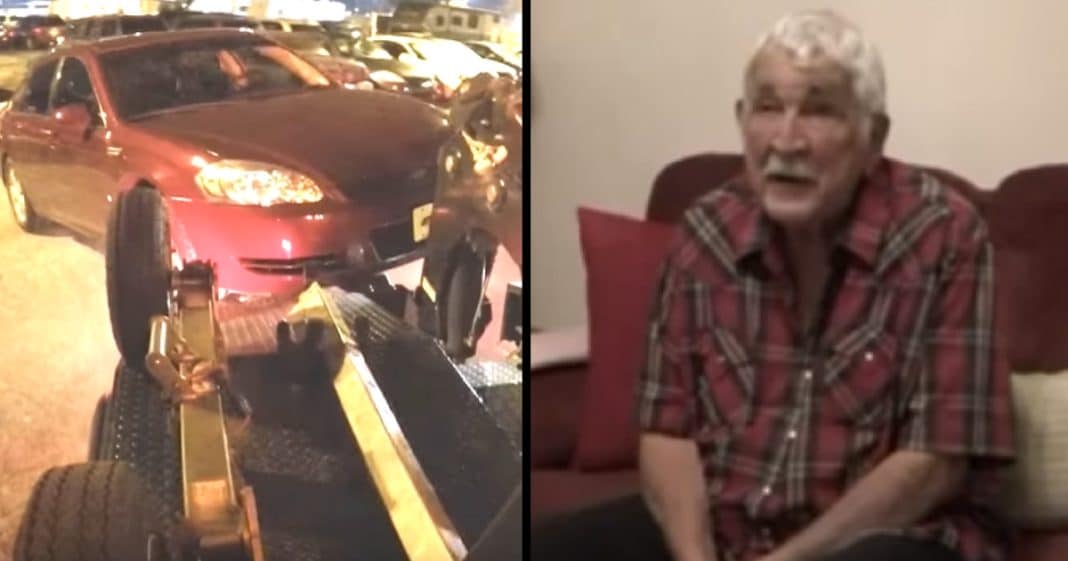 When you think of warm-hearted people, a repo man is probably not the first person to come to your mind. To work in that industry you have to have a pretty thick skin because you are dealing with a lot of people who are not too happy with you.

Repo man Jim Ford has seen it all. He’s been run over and even shot at while trying to repossess people’s cars. Living like that has forced him to become pretty tough, but when he went to repossess one couple’s car recently their story pierced him to his very core.

Navy veteran Stan Kipping and his wife, Pat, have never been very rich, but they have also never been in serious debt. That is until their medical bills started to pile up. They knew they were in serious trouble when they couldn’t pay their monthly $100 car payment.

That’s when Jim showed up at their door to repossess their car. But when he met the couple and saw their cabinets full of medicine, he knew he couldn’t just leave them.

“I made it a block before I pulled over and called the bank,” he recalled later. He asked if he could pay off the amount due on the car so they wouldn’t lose it.

He then decided to take things a step further, setting up a GoFundMe page to help raise money for the Kippings so they wouldn’t be in such a tight spot every month.

Just a few days later he returned the car to the Kipping’s house. He’d had it detailed and the oil changed and put a frozen turkey in the front seat.

Then came the real shock.

He told them he had paid off the car in its entirety, then handed the overwhelmed couple an envelope containing all the extra money that had been raised – over $17,000!

“It’s just like hitting the lottery,” Stan said. “I’m so happy, I cannot believe it!”

“When he took the car I just said, ‘God, do whatever. Whatever you think is best for us,'” Pat recalled. “You know, God works in mysterious ways.”

Sadly, just a few months later, more tragedy struck the couple. In the same week, Pat had a heart attack and Stan had to be rushed to the ICU for a lacerated liver after falling.

Jim had become close to the couple and reached out to all of the followers on the GoFundMe page he had set up, asking them to “please pray for my friends.”

Thankfully Pat was able to recover after the heart attack, but three days later Stan passed away due to complications from the fall.

Heartbroken, Jim posted another plea on the GoFundMe page.

“I’m asking everyone for a small favor to help [relieve] the family of the funeral expenses and the helicopter/hospital bills that may arise from this tragic accident,” he said, asking everyone to donate just five dollars to help with the expenses.

While Stan will be greatly missed, Pat can find comfort knowing there are so many loving people around the world who will step up to support her, and she knows she has a friend in Jim for life.

Were you touched by what this “repo man” did for this couple in need? So share this!