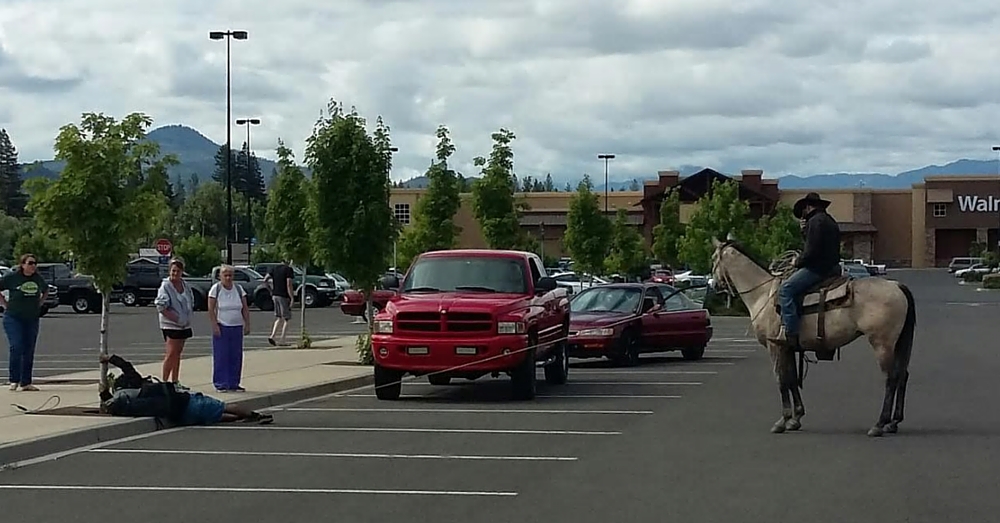 An attempted bicycle theft in a Walmart parking lot was foiled by a cattle rancher on horseback, who chased the thief down and lassoed him until the local police in southern Oregon could arrive.

The bicycle was stolen from a bike rack outside a Walmart in Eagle Point, a town about 170 miles south of Eugene, Oregon, at around 10am on Friday morning. The woman who owned the bike and several others gave chase on foot but were unable to catch him.

Then a rancher named Robert Borba brought his horse out of its trailer, mounted up and chased the thief down, according to Chris Adams, an officer with the Eagle Point police who responded to the 911 call about the theft.

“When we arrived, there was a large crowd standing around a younger gentleman who was on the ground, the rope around his ankle, hanging on to a tree,” Adams said. Victorino Arellano-Sanchez was arrested and charged with theft, the police said.

“I seen this fella trying to get up to speed on a bicycle,” Borba told the Medford Mail-Tribune. “I wasn’t going to catch him on foot. I just don’t run very fast.” He added: “I use a rope every day, that’s how I make my living. If it catches cattle pretty good, it catches a bandit pretty good.”

Not a lot is known about Borba because he is new in town, Adams said, but “it appears he will be a good fit. Eagle Point is a small city, and people watch out for each other. That’s exactly what he did.”