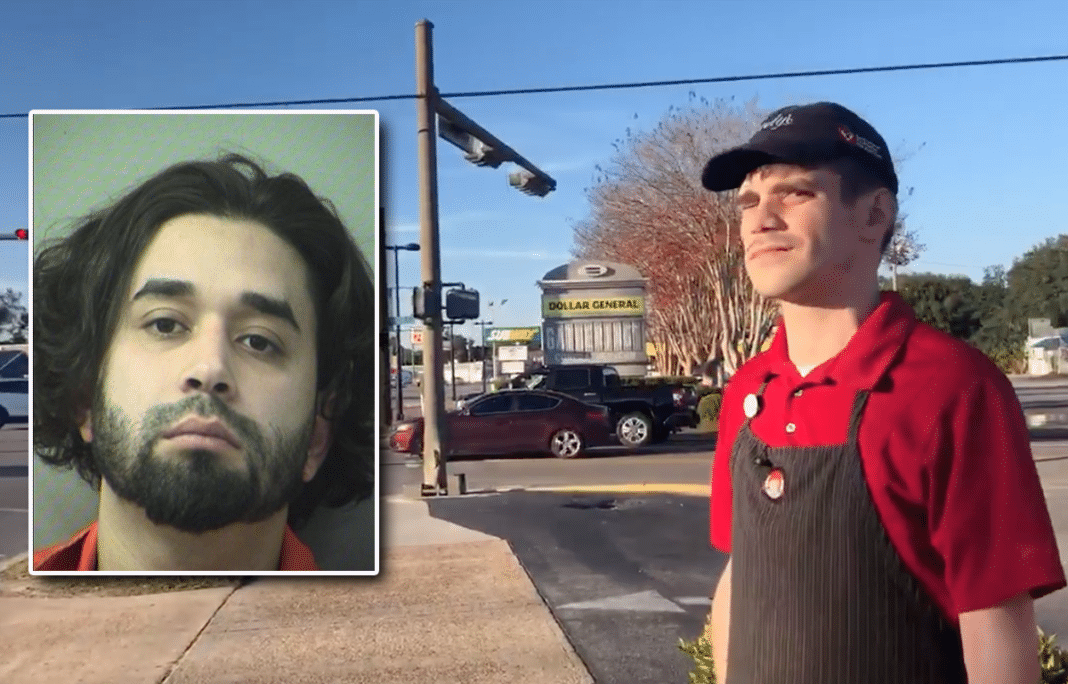 A young father made the mistake of his life when he left his three-year-old sleeping unattended at their Fort Walton Beach apartment. Kenneth Lopez Toledo, 25, decided to go and pick up his wife from her job at Walmart and brought the couple’s two-year-old along with him but left his other child. Toledo said the girl was sleeping and he didn’t want to disturb her. When he and his wife and child returned home, the three-year-old was missing.

Meanwhile, Daniel Hunter, an employee at a Wendy’s restaurant, was ending his shift for the evening. His father picked him up and they were headed to the intersection of Eglin Parkway, one of the main thoroughfares running along the nearby coastline.

“I happened to look to my left and I saw this kid,” recalled Hunter. He didn’t realize at first and was stunned to see a toddler wearing only a tank top, diaper, and boots in the 44-degree weather. She was attempting to cross the busy Eglin Parkway at 11 p.m. on November 26th.

His father swung the vehicle around 180 degrees and headed back to the spot where the little girl was making her way into traffic.

Hunter said the little girl was visibly scared. He and his father worked quickly to cut her off from crossing the street. They worked together, coming toward her from opposite sides to make sure they could get to her before it was too late.

According to CBS affiliate WKRG:

“She ran and I was like this… Come on. Come here..and she ran to me and hugged me and was crying for her mom,” Hunter said.

Thanks to the quick-thinking heroic Wendy’s employee and his father, the little girl survived. Toledo was reunited with his child, and was extremely thakful, according to Hunter’s account.

“When he saw her he hugged her for dear life,” Hunter said. “He was very emotional about it. Understandable.”

The young father had to pay for his enormous mistake in more ways than one. He was arrested and charged with child neglect. Toledo was booked and released from the Okaloosa County Jail. We’re quite sure he has learned never to leave his young kids unattended in the future.

It’s a great reminder to all of us how young kids can quickly get themselves into serious trouble if left alone for any length of time. Nobody can always count on the heroic actions of a stranger. Toledo can count himself very lucky that Daniel Hunter was in the right place at the right time.

A three year old dressed in only a tank top, diaper, and boots was spotted trying to cross Eglin Parkway near Hughes…

WENDY'S EMPLOYEE RESCUES TODDLER: Thanks to Daniel Hunter, an employee at the Wendy's on Eglin Parkway, a three-year-old girl is safe after trying to cross the busy highway late Monday night. Hear more from Daniel tonight on News 5 at 10 p.m. THE STORY: wkrg.com/1623053075?utm_medium=social&utm_source=facebook_WKRG

More from journalist Renee Beninate of WEAR ABC 3 News below:

‪Daniel Hunter works at this @Wendys in #FortWaltonBeach. Last night he was driving home, when he saw a 3 y.o trying to cross this busy highway alone in 44-degrees weather. Hear how Hunter saved this little girl’s life tonight at 9/10 on WEAR ABC 3 News, Pensacola #C3N ‬