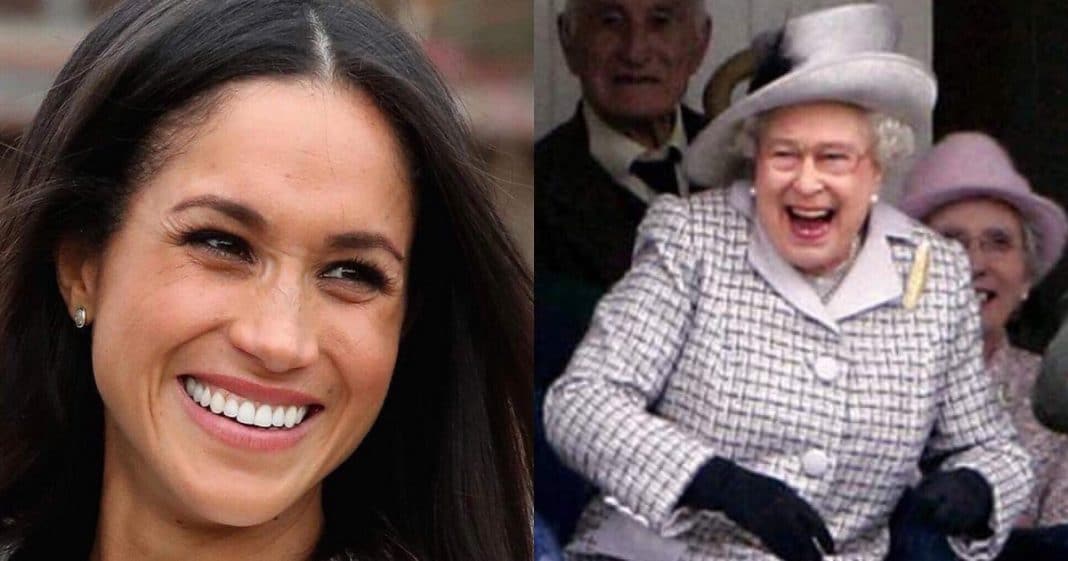 Meghan Markle was well-received by the royal family for the Christmas holiday. Prince Harry told the BBC in an exclusive interview after their weekend at Sandringham House: “She enjoyed it, The family loved having her there.”

Finding the right gift for the Queen of England would be a daunting task. She has everything under the sun. From the most elegant of jewels to the silliest of gag gifts, there’s nothing she hasn’t received.

Imagine you’re Meghan Markle attending your first royal Christmas. The former actress faced this very quandary. Meghan reportedly did a lot of shopping and browsing until finally settling on the perfect gift…a singing and dancing hamster. That’s right, The Queen is now in possession of a musical rodent.

Maybe we’ve been watching too much @netflix #TheCrown but may need to get us the #queenelizabeth ii #Funko Pop when it comes out PREORDER/ORDER LINK IN BIO – #royalfamily #theroyals follow us on twitter @ popvinylworld to get our www.popvinylworld.com news updates -#funko #funkopop #funkofunatic #popvinyl #vinyl #collection #popvinylatic #popvinyls #corgi #corgisofinstagram

Meghan followed royal protocol with her gift. Members of the royal family exchange silly, gag presents for Christmas. So the future royal’s contribution was perfect for the occasion.

It’s been rumored that many other gifts over the years once sat on shelves of dollar stores and joke shops. Princess Anne reportedly once gifted her brother, Prince Charles with a shower mat. This year, Prince Harry gave his favorite grannie a bath hat with the phrase, “life’s a b**ch” on it. The Queen apparently loved his gift just as she did Meghan’s.

The Queen was said to have burst out laughing after receiving both presents. Hearty laughter isn’t something you probably associate with a woman as regal as The Queen.

This tradition of only exchanging silly gifts during the holidays is pretty neat. The royal family lack for nothing. If they want something, they’ll buy it. This tradition shows just how close they all are to each other. It’s often not baubles that are the most important. It might be that simple present that can make you smile or touch your heart. And isn’t that the reason behind selecting presents for those you love?

In this year's Queen's Christmas Broadcast 2017, Her Majesty has talked about the theme of "home" and wished everyone a very happy Christmas. You can watch the full speech on our website – by following the link in our bio. "We think of our homes as places of warmth, familiarity and love; of shared stories and memories, which is perhaps why at this time of year so many return to where they grew up," Her Majesty said. "There is a timeless simplicity to the pull of home. "For many, the idea of “home” reaches beyond a physical building – to a home town or city.  This Christmas, I think of London and Manchester, whose powerful identities shone through over the past twelve months in the face of appalling attacks," The Queen said. The Queen also added… "Today we celebrate Christmas, which itself is sometimes described as a festival of the home.  Families travel long distances to be together. "Volunteers and charities, as well as many churches, arrange meals for the homeless and those who would otherwise be alone on Christmas Day.  We remember the birth of Jesus Christ whose only sanctuary was a stable in Bethlehem.  He knew rejection, hardship and persecution; and yet it is Jesus Christ’s generous love and example which has inspired me through good times and bad. "Whatever your own experiences this year; wherever and however you are watching,  I wish you a peaceful and very happy Christmas." #Christmas2017 #ChristmasDay2017 #QueensSpeech

Do you love the sweet relationship Queen Elizabeth shares with Prince Harry’s bride-to-be? So share this!