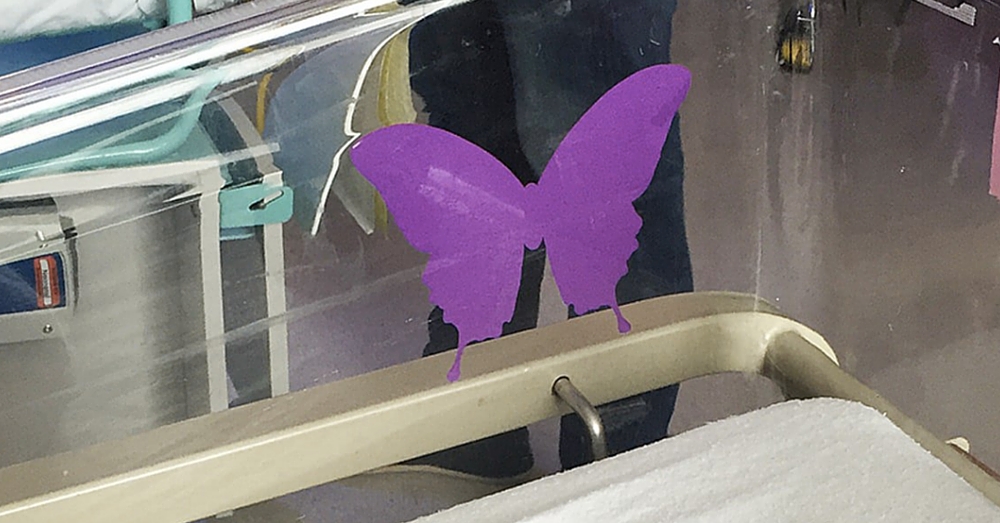 When Millie Smith and Lewis Cann found out they were expecting a baby, they were overjoyed. When they learned they were having identical twin girls, they were even more excited.

Then their doctor gave them some devastating news – one of the babies had anencephaly, a condition that was incompatible with life. Millie and Lewis moved forward with the high-risk pregnancy, excited to meet their daughters, but burdened with the knowledge that they would soon have to say goodbye to one of them.

Because they knew they wouldn’t have long with one of their daughters, it was important to them to choose names early on. “Knowing she would only survive for seconds or minutes, I wanted her to be named during that time,” Millie said.

They wanted to names to have meaning, and decided on Skye and Callie. “We knew that Skye needed to have a name before she was born,” Millie said. “Skye was somewhere we knew she would always be, that we could look up at the sky and remember our baby.”

Millie went into labor at 30 weeks and ended up needing an emergency C-section. “When the girls were born, they both cried,” Millie said. “This was a huge moment, as we were told that Skye would not make a noise or move.”

The family was able to spend three hours together before Skye passed away. “This was the worst moment in our lives,” Millie recalled. “I have never ever felt heartbreak like that before. But I am proud that she fought for so long to spend time with us.”

Because she was born so early, Callie had to stay in the NICU for some time. While the nurses were aware that she had a twin sister who had not survived, Millie said that as time passed they stopped talking about Skye, and “after about four weeks, everyone acted as though nothing had happened, meaning the families around me had no idea about our situation.”

One morning, an overwhelmed NICU mother of twins commented to Millie that she was “so lucky” she didn’t have twins. “Up until this point, I hadn’t cried in front of any of these parents,” Millie said. “But that was it. I ran out of the room in tears. The comment absolutely broke me. I didn’t have the guts to go back in and tell her our story.”

She decided that she wanted to do something for other parents in her situation to make sure that something like that never happened again. That’s when she came up with the purple butterfly cards.

She designed a poster to put in the NICU explaining that an incubator with a purple butterfly on it meant the baby was one of a set of multiples in which not all of the babies had survived.

Why the hidden meaning to this purple butterfly is so important to NICU parents https://t.co/8DA3uXi7sB pic.twitter.com/UB8OyOypHB

“I chose butterflies, as I felt it was fitting to remember the babies that flew away,” Millie said, “the color purple because it is suitable for both boys or girls.”

The idea was so popular that it has spread past their hospital in the U.K. to hospitals in several countries around the globe.

Callie is now eight weeks old and Millie and Lewis are working to set up the Skye High Foundation which will support the butterfly cards as well as other efforts to help families like theirs.

Do you think these purple butterfly cards are a good idea? So share this!