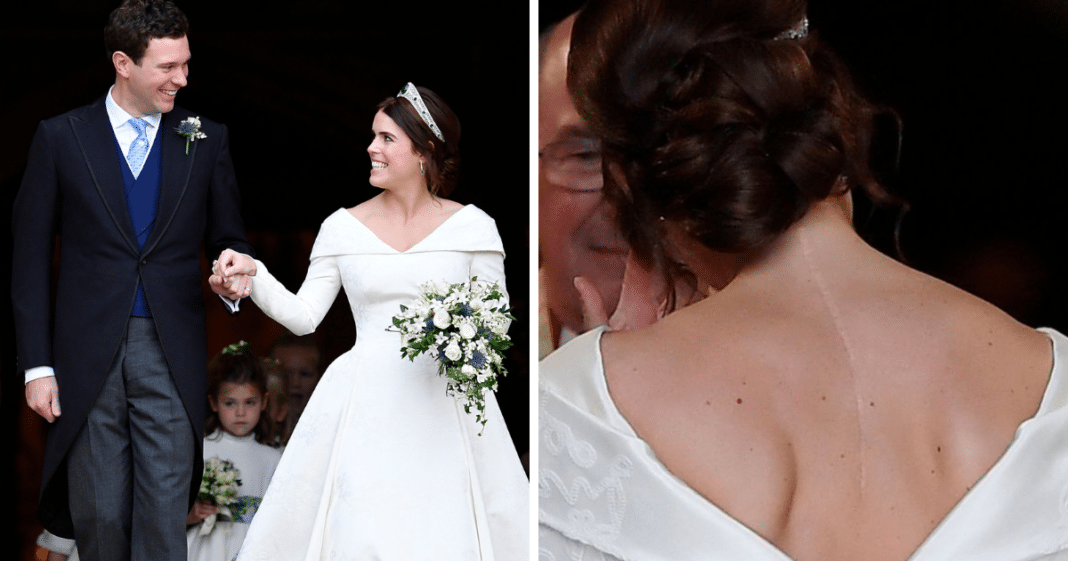 The second royal wedding of the year took place Friday at St. George’s Chapel at Windsor Castle, where Prince Harry and Meghan Markle wed on 19 May 2018. This time the princess bride was Princess Eugenie, pronounced “Yoo-genny,” who married dashing groom Jack Brooksbank after meeting on a ski trip in a Swiss resort town. They were engaged in Nicaragua in January 2018 after a seven-year courtship.

Although Princess Eugenie is well-known in the UK, she is probably best known in America for the flamboyant hats that she and her older sister Princess Beatrice wore to Prince William and Kate Middleton’s wedding. (see below)

Princess Eugenie made another bold fashion statement at her wedding with a Peter Pilotto dress designed with a low back so that she could show off the scar she received from scoliosis surgery when she was 12-years-old. She wanted to send a message of support for those suffering from scoliosis and to make an important statement about real beauty.

“It’s a lovely way to honour the people who looked after me and a way of standing up for young people who also go through this,” she told ITV before the ceremony.

“I think you can change the way beauty is, and you can show people your scars and I think it’s really special to stand up for that.”

See more about the reason Princess Eugenie showed off her scar below:

The bride wore a beautiful emerald-encrusted tiara called the Greville Emerald Kokoshnik Tiara. The jewels were lent to her by the Queen and allowed her to keep her hair up in the back so that everyone could see her scar. The tiara was the “something borrowed” and dates back to 1919.

Princess Eugenie's ring is made from a piece of Welsh gold given to her by the Queen. She wore the Greville Emerald Kokoshnik Tiara, lent to her by the Queen as her 'something borrowed' – it dates back to 1919https://t.co/W1iXItNkcD pic.twitter.com/IJDkVmQP4E

Princess Eugenie, 28, is the third of Queen Elizabeth’s four granddaughters. She is currently ninth in line for the throne and her full birth name is Princess Eugenie Victoria Helena of York. Her father is Prince Andrew, Duke of York, the third child of the Queen. Her mother is “Fergie,” or Sarah Ferguson, who was divorced from Prince Andrew in 1996. Both Fergie and the late Princess Diana separated from their husbands in 1992 and leaned on each other for support during those times. Fergie and Diana were fourth cousins, both descended from William Cavendish, Fourth Duke of Devonshire. They knew each other since their adolescence.

Bocelli also performed a flawless rendition of “Ave Maria”. (See the video at the end of the article)

— The Duke and Duchess of Cambridge (@KensingtonRoyal) October 12, 2018

Following the ceremony, the couple took a carriage ride to Windsor Castle, where the Queen hosted wedding guests for a daytime party. Prince Andrew brought those in attendance to tears by going out of his way to welcome his new son-in-law to the family. He walked over and give Jack Brooksbank, 32, a big hug, something he seldom ever does, according to one account. 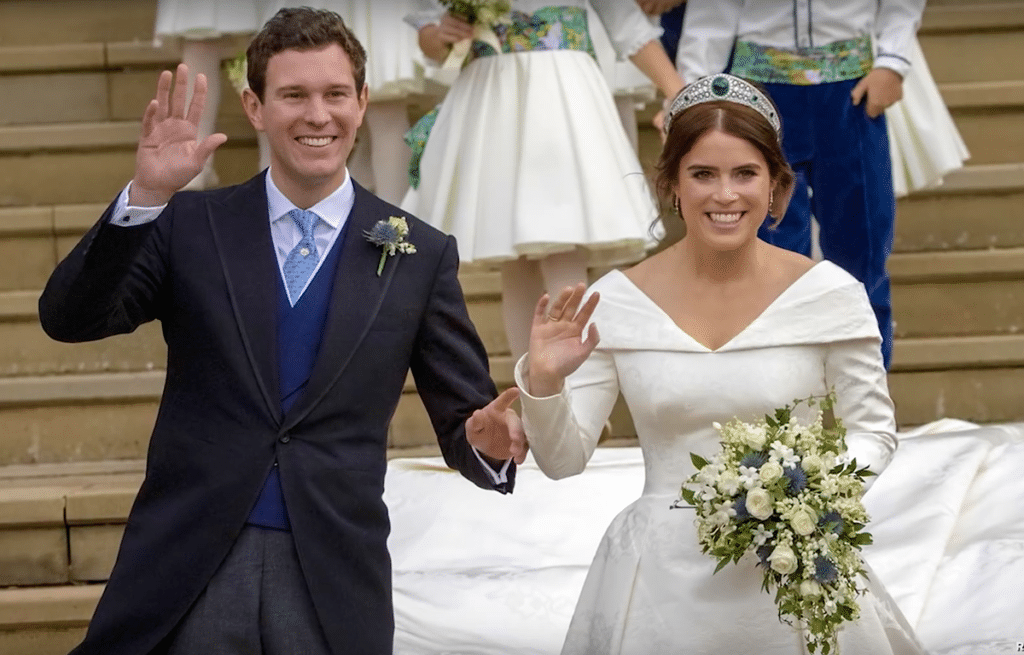 Brooksbank got the tears flowing with his own speech:

“He talked about how she is the one light of his life. She makes him complete and he can’t imagine spending a day apart. Everyone cried—Eugenie’s eyes went too. I mean she wasn’t sobbing. It was just lovely, sweet, short and modern.”

Brooksbank is the son of an accountant whose family has royal connections through the Brooksbank baronets. He works in the hospitality industry, where he has managed a London nightclub called Mahiki. He is the UK ambassador for George Clooney and Rande Gerber’s tequila brand, Casamigos.

Brooksbank’s new bride has a combined degree of Art History, English Literature and Politics from Newcastle University. Princess Eugenie has worked as a benefit auctions manager at New York auction firm, Paddle8. Now she works in London at the Hauser & Wirth art gallery. She and her mother, Sarah Ferguson, support many charities, including Teenage Cancer Trust, Children in Crisis and Elephant Family.

See the couple talk about the day they met below:

Princess Eugenie and Jack Brooksbank describe the first moment they met ahead of their wedding tomorrow, in this exclusive clip from an interview with @thismorning presenters @RuthieeL and @EamonnHolmes pic.twitter.com/sDz2qTOWnn

See Andrea Bocelli perform at the wedding below: