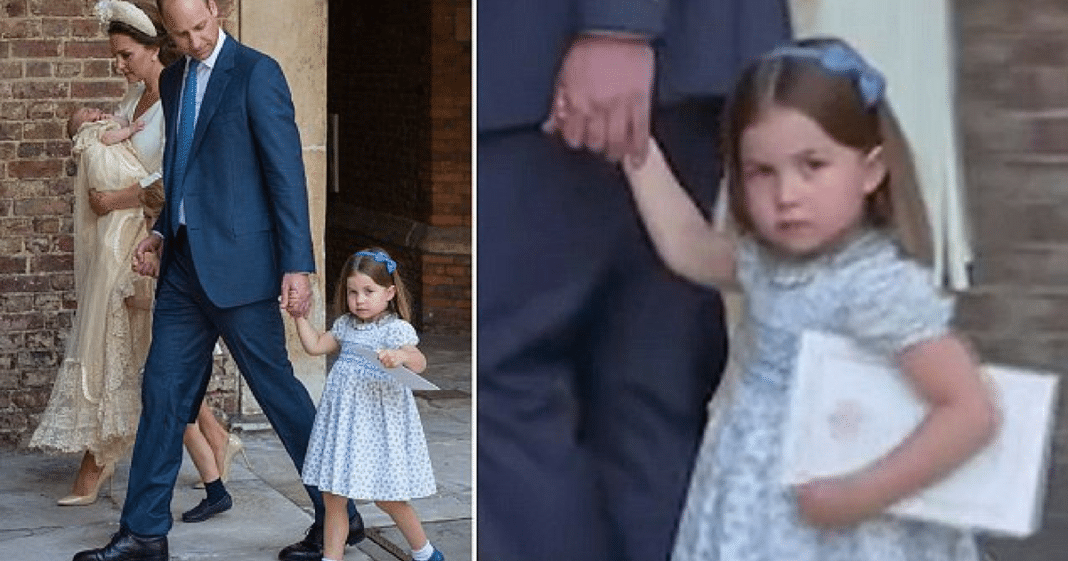 Monday was the first time the public observed the five members of the Cambridge family together. They were joined by the Duke and Duchess of Sussex, the Middletons and the Duke and Duchess of Cornwall. Everyone gathered at the Royal Chapel at St. James Palace for the christening of 11-week-old Prince Louis, the newest member of the Cambridge family.

George and Charlotte arrived holding their father’s hands. Prince William encouraged them to shake the hand of the Archbishop of Canterbury. Charlotte had no problem going about her business before the cameras and photographers. She sent everyone a cheery wave. Her brother appeared more hesitant as they went inside.

The 3-year-old royal is known for stealing the show with her delightful wave and confident nature, and today – the adorable Princess Charlotte definitely didn't disappoint! ??

Their mother, The Duchess of Cambridge, was radiant in an Alexander McQueen bespoke dress. Kate turns to McQueen for significant events. She’s been dressed by the house for her wedding, Trooping of the Color and now, the baptisms of all her children.

Prince William, Catherine, Prince George, Princess Charlotte and baby Prince Louis beamed as they led Uncle Harry, Aunt Meghan, aka The Duke and Duchess of Sussex, two sets of grandparents and other aunts and uncles into the chapel.

During this particular occasion, the baby of the hour, Prince Louis slept through the entire ceremony. Afterward, George and Charlotte again held their father’s hand as they exited the chapel. Charlotte turned to the media pack and said: ‘You’re not coming.” To be sure they got her point, she peered over her shoulder to make sure they didn’t follow her family and their guests as they made their way to Clarence House for a private tea reception.

What a cheeky little girl. How adorable. Too bad great-grandma and great-Grandpa weren’t present. Buckingham Palace said earlier in the day that Queen Elizabeth and her husband, The Duke of Edinburgh wouldn’t be attending the christening. Her Majesty is returning to London from Scotland. This is unusual, but not uncommon.

Oh to be a fly on the wall in Clarence House. Was Charlotte scolded for her comment? We probably won’t know. We have learned of one of the presents the tiny Prince received. His Uncle Harry and Aunt Meghan gifted him with a first edition of the 1926 classic, “Winnie the Pooh.”

According to Royal central, the tome reportedly cost eight thousand British pounds. Prince Harry has started a library for his niece and nephews. He got the idea from something his mother, the Late Princess Diana did for him and his brother while they were children. She loved the classics and would read to them.