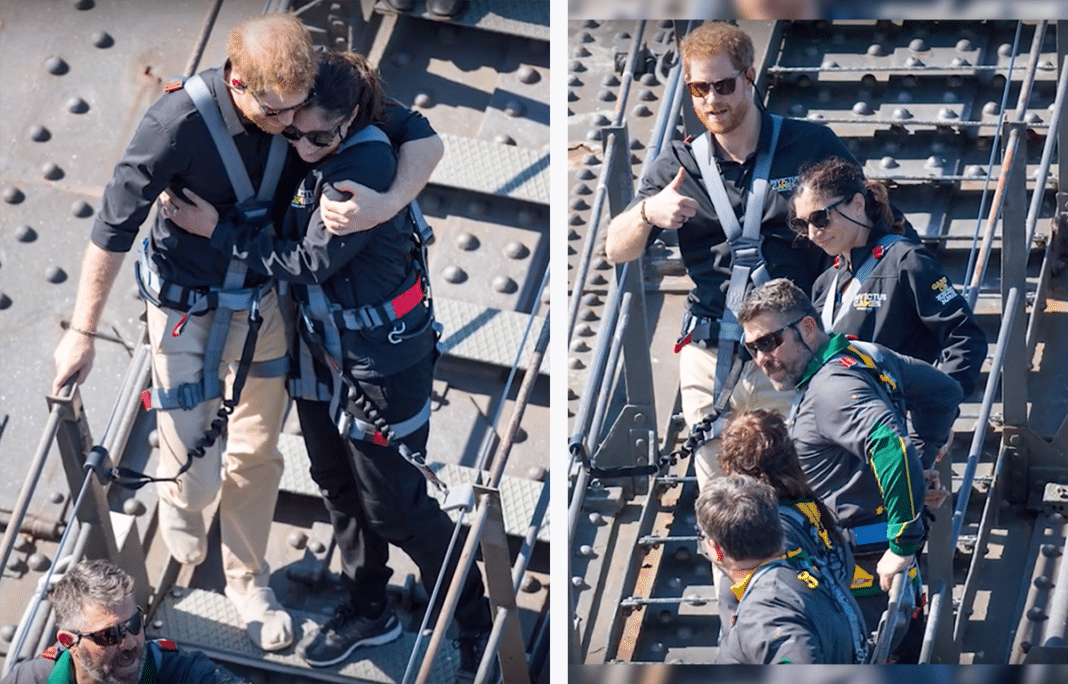 At the opening ceremony for the Invictus Games, Prince Harry once again proved that he has inherited his mother, the late Princess Diana’s sense of compassion and decency. During a ceremony in which he climbed the Sydney, Australia Harbour Bridge, he took time to comfort and share a tender moment with a woman who was grieving the loss of her veteran husband. Although he was pressured to move along, he refused, making sure that she had his full attention.

Gwen Cherne, 41, lost her husband, officer Peter J. Cafe of the Australian special forces, to suicide last year in February. She was one of a select group of people chosen to take part as Ambassadors in the ceremony to open the Invictus Games, raising the Invictus flag atop the bridge. She and the Duke of Sussex were accompanied by Prime Minister Scott Morrison and three veterans taking part in the games.

While making the steep climb, Cherne turned to the Prince and thanked him for including the families of veterans in the event. She then shared the story of her late husband. Harry gave her a tender hug and talked to her for about ten minutes. Harry’s staff apparently became impatient and asked him to move along, but that’s when he put his foot down.

“He stopped and said, ‘I’m in a middle of a conversation, and I’m not going to leave this.'”

Prince Harry has been a champion for confronting mental health issues, having sought help himself after the death of his mother when he was twelve years old. Just days ago, he discussed how important it is for people to seek help for depression in rural Australia. He wasn’t about to hurry the conversation with the grieving widow.

“We were talking about my story and mental health and how difficult it is still, in our society, to talk about grief and loss and suicide.

“And how important things like the Invictus Games are to shedding light on, and allowing people to start to have these conversations that are great to have.”

Invictus means “unconquered” and the goal is to show respect for veterans and their families.

“The Games harness the power of sport to inspire recovery, support rehabilitation, and generate a wider understanding and respect for those who serve their country.”

Certainly, the Duke of Sussex’s actions prove he is serious about those goals today.

Prince Harry and his wife, Meghan Markle watched several events at the Games before they departed for the next leg of the Royal Tour. They return to the closing ceremony in Sydney on October 27, which will be a milestone for the couple.

Prince Harry introduced Meghan to the world at last years’ Invictus games when he brought her to Toronto. She sat in a different section as he sat with Melania Trump and Justin Trudeau. Now she is by his side as the Duchess of Sussex.

After make their first official appearance together at the 2017 Games, they're set to attend the 2018 edition in Sydney this weekend. https://t.co/eSgiJkfOQI

See Gwen Cherne talk about her special moment with Prince Harry below:

It was a moment Invictus Ambassador Gwen Cherne will never forget, as she spent 10 minutes talking to Prince Harry as they scaled the Sydney Harbour Bridge. #9Today pic.twitter.com/EkVB5tt8tA

See more from Radio.com below: