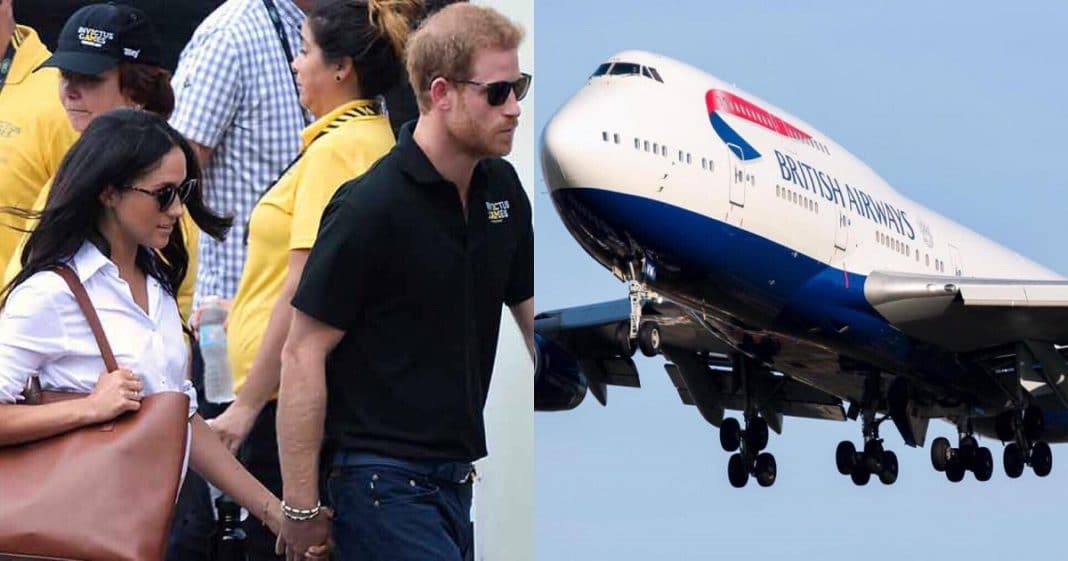 After a busy weekend with The Queen and the royal family, Prince Harry whisked his fiancee, Meghan Markle to Nice, France for the New Year’s holiday.

The two took a scheduled British Airways economy flight to the French Riviera. To avoid being recognized by fellow passengers, the private couple boarded the plane first. They headed to the rear of the jet and sat near the rear toilets. Though they only had three edgy and nervous security guards in their party, the lovebirds reserved three economy rows on both sides of the aisle.

Harry, according to the Daily Mail, wore a baseball cap pulled low over his face while Meghan wore a simple black beanie. After landing in France, they were met by the elite protection agency responsible for looking after foreign dignitaries.

One officer commented that due to the threat of terrorism, the royal and his fiancee needed such looking after even on this private visit. He added that with what happened to his mother 20 years ago, it would be best for them to receive such surveillance. Kensington Palace has yet to comment on the couple’s French holiday. A statement most likely won’t be issued because Harry and Meghan aren’t in the country in an official capacity.

Meghan had a busy weekend meeting The Queen’s extended family members. She accompanied Harry to the annual lunch hosted by The Queen at her main residence of Buckingham Palace. This is a royal first a week before Christmas.

Meghan is the first fiancee to be invited to this lunch. She and Harry also stayed with the Cambridge family at their country estate of Anmer Hall for the Christmas holiday. The two couples along with other senior members of the royal family walked to St. Mary Magdalene Church for Christmas Day service. Harry and Meghan walked arm-in-arm, thrilling the crowds who braved the elements to catch a glimpse of them.

Later in the day, everyone returned to Sandringham House for a black-tie dinner and to watch The queen’s annual Christmas broadcast. In it, the monarch thanked her husband, Prince Philip for his years of public service and dedication to her.

One highlight of the weekend was when everyone exchanged gifts. Prince Harry gave his beloved grannie a shower cap with the phrase, “Life’s a b**ch” written on it. Her Majesty apparently loved it.

Meghan seems to be fitting in well with Harry’s family. She’s apparently made a good impression on everyone. During an interview with the BBC last week, Harry said that his family is like the family “she never had.” This statement has been met with some controversy from Meghan’s half sister, Samantha Grant.

Grant disputed on Twitter how Meghan had a great family growing up; she was just too busy to realize it, claiming that the actress has a large extended family that has always been supportive of her.