Pregnant Mom Goes Into Labor As Flood Waters Rise, Then Stranger Shows Up At Front Door 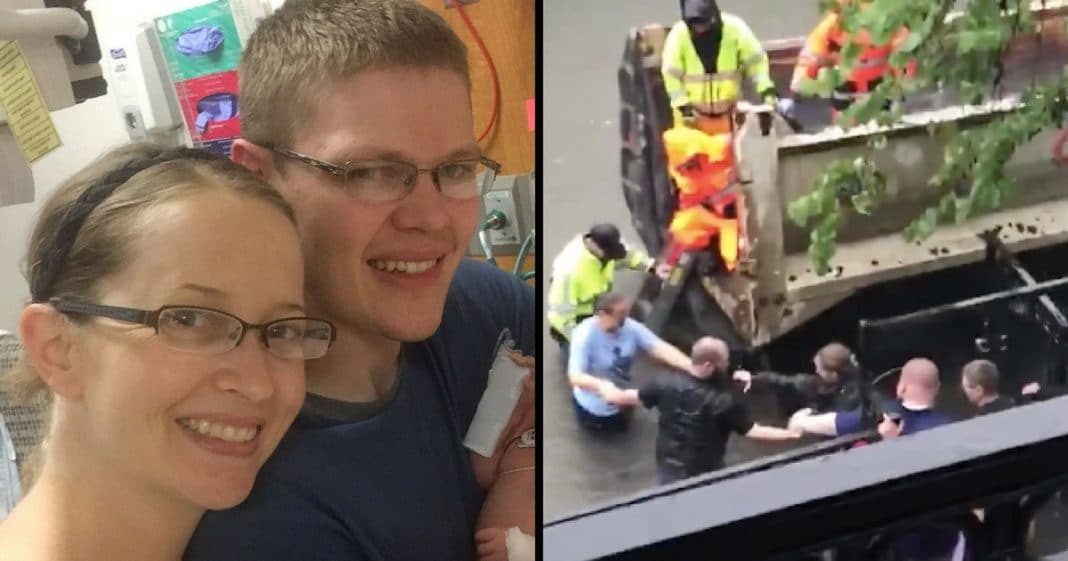 These new parents are going to have quite the story to tell their daughter when she gets older!

Greg and Andrea Smith are new to Houston. Both doctors, they arrived in late July to do advanced medical training in their respective fields. Greg is a pediatric anesthesiologist; Andrea specializes in geriatrics.

The couple has tried for years to have a baby. Sadly, Andrea suffered two miscarriages. Heartbroken, they turned to their faith the get them through.

“We felt like we had to surrender this to God,” Greg said.

When they found out they were expecting again, the couple was ecstatic. Little did they know, though, the ordeal they would have to go through to bring their baby into the world.

Andrea had been experiencing serious contractions for weeks, but on Saturday night as he looked out their apartment window at the falling rain, Greg had a feeling their baby would be on the way soon.

At the time, it was only a light rain and there was no accumulation. Greg guessed there might be five or six inches of rain the next day, but figured he could drive through it to get to the hospital. When he woke up on Sunday, though, it was a different story.

When he woke up on Sunday, though, it was a different story.

“I woke up to two or three feet,” he said. “We soon realized, we were kind of stuck.”

Greg’s mother, Sue Chor, had flown in from Montana to help the couple and was already staying with them. As the flood waters rose, she kept an eye on Andrea and she knew the baby would be making her debut soon.

“Within a couple hours I noticed Annie having real good contractions,” she recalled.

Greg tried to call 911, but he kept getting kicked off the line. When his call finally went through, no one answered.

Sue tried calling the Coast Guard and then the National Guard, but learned that troops would not be able to get there in time.

That’s when they knew they would have to deliver the baby themselves.

Greg was worried. Though he is a doctor, he is not trained in obstetrics.

“I had some courage, though,” he said. “Even if I had to do a home birth, I felt like it was going to be okay.”

Neither Greg not Andrea kept medical supplies in their home. Thankfully, though, their apartment complex is home to many medical professionals who work at the nearby Texas Medical Center. A neighbor sent out a call for help on a community message board and pretty soon doctors, nurses, and EMTs were showing up at the Smith’s door with sutures, scissors, and other supplies.

Greg contacted an out-of-town obstetrician-friend who volunteered to coach him through the birth via FaceTime or Skype and Sue began to get everything ready.

“I boiled water over the stove,” she said. “I put the instruments in water, and put them out on a fresh paper towel to cool.”

She was proud of her son for the way he was handling the stressful situation.

“My son was cool, calm, and collected,” she said. “He was ready to deliver his child.”

As the water continued to get higher, a concerned neighbor who lived on the second floor offered her apartment to be used as a delivery room. Sue and some other neighbors raced upstairs to set up the makeshift delivery room, but they would soon discover they didn’t need it.

As Greg prepared to deliver the baby, a neighbor spotted a large dump truck driving down the street. Greg ran out to hail it down, and that’s when they told him something that left him speechless.

“We’re here for you,” the people in the truck told the stunned dad-to-be.

It turns out someone had contacted someone else whose father lived across the street from a fire station. The man had braved the storm to walk over to the station and tell the firefighters about the Smith’s situation. The firefighters, in turn, sent the truck to help.

“The next thing I know, there’s a ride for Annie and Greg,” Sue recalled. “They grabbed their coats and umbrellas and the baby’s bags. Then off they went.”

A neighbor captured the scene as people joined together to form a human chain to help the laboring mother through the waist-high water and into the truck. Greg followed right behind, and soon they were off.

“We were soaked,” Greg said. “We sat on top of all these fire hoses, while firemen drove us to the hospital. They were careful to go slow and keep us safe.”

When they got to the hospital they were offered dry clothes and taken to a real delivery room. At 1:59 a.m., they welcomed baby Adrielle into the world.

The baby was healthy but did have some issues that caused her to be put in the intensive care unit. The Smiths are grateful they could be at the hospital so Adrielle could get the proper care she needed.

“If she were born at home, that wouldn’t have been the best place for her,” Greg said. “I’m so glad she is in the hospital.”

While bringing Adrielle into the world was quite the ordeal, the Smiths know everything happened right on time and for a reason.

“Everything about this pregnancy we said is God’s will,” Greg said. “That’s why her name is Adrielle. It means she belongs to God.”

We’re so glad the Smiths made it to the hospital in time and that little Adrielle arrived safely. Had it not been for the joint efforts of so many neighbors and strangers, who knows what would have happened.

If there is one thing we have learned during the horrible aftermath of Hurrican Harvey, it’s that there are a lot of good-hearted heroes out there. Even when all seems lost, there is always hope!

Were you amazed at how these strangers banded together to help this laboring mother? So share this!