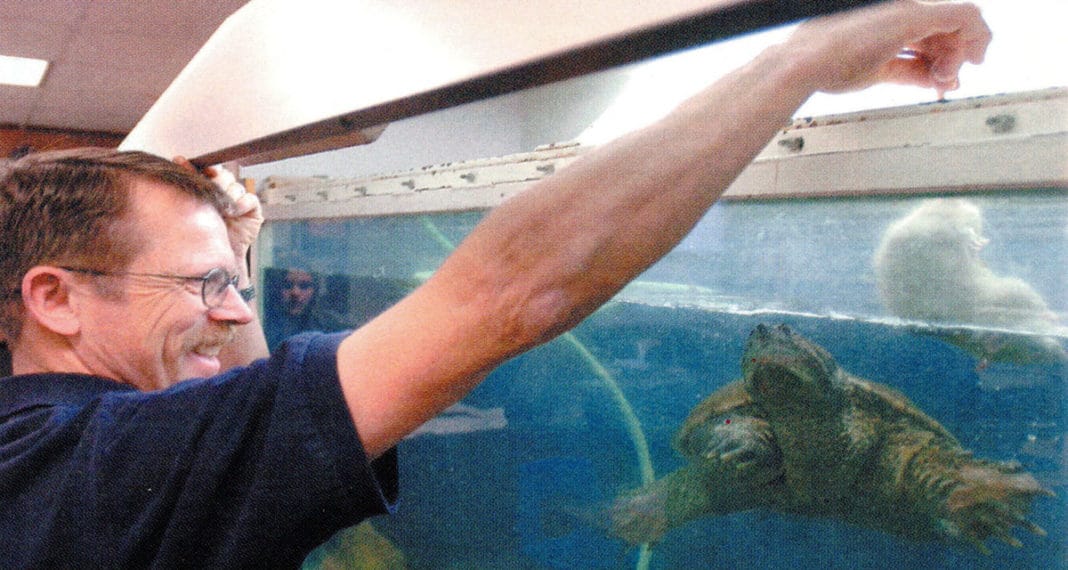 A very popular middle school biology teacher has come under fire for allegedly feeding a puppy to a snapping turtle as students watched. Robert Crosland is a teacher at Preston Middle School in Preston, Idaho. Preston is the largest city in Franklin County, Idaho.

The school district released this statement about the incident: “On March 7, 2018, Preston School District was made aware of a regrettable circumstance involving some of the biological specimens at Preston Jr. High. The event … was not a part of any school-directed program. We emphasize that at no time was the safety of students or staff compromised.”

Their response came after animal rights activist; Jill Parrish filed a police report after hearing about the incident. She said: “What I have learned in the last four days is disgusting. It is sick. It is sick,” Parrish told Salt Lake City TV station KSTU.

An Idaho teacher who fed a puppy to a turtle in front of students is now under investigation by the school and law enforcement.

“Allowing children to watch an innocent baby puppy scream because it is being fed to an animal. That is violence. That is not OK.” According to the Idaho Statesman, Dave Fryar, the sheriff of Preston County, has forwarded a report of this investigation to the county prosecutor.

Este Hull, a 7th-grade student at Preston Junior High, told the station that Crosland fed mice or birds to his menagerie of animals which includes snakes. she said of the terminally-ill puppy, “I feel a little bit better that it was a puppy that was going to die, not just a healthy puppy.”

Parents Annette Salvesen and Julie Johnson told KSTU Crosland is the best science teacher at the middle school. “If it was a deformed puppy that was going to die anyway, Cros(land) is very much circle-of-life,” Salveson added.

The snapping turtle who was fed the puppy has since been “euthanized humanely,” according to the Department of Agriculture in the state.

The East Idaho News reported conflicting information about this incident, stating it occurred after school hours. Furthermore, it says Crosland is highly regarded by both students and parents. The well-liked teacher has tanks of animals located throughout his classroom.

Three former students of Croslands, (who wished to remain anonymous), said he fed guinea pigs to snakes and snapping turtles during demonstrations. “He is a cool teacher who really brought science to life,” one of the former students told the paper. “I loved his class because he had turtles and snakes and other cool things.”

Crosland has refused to comment about this event. He’s still teaching at the school and has not been suspended.